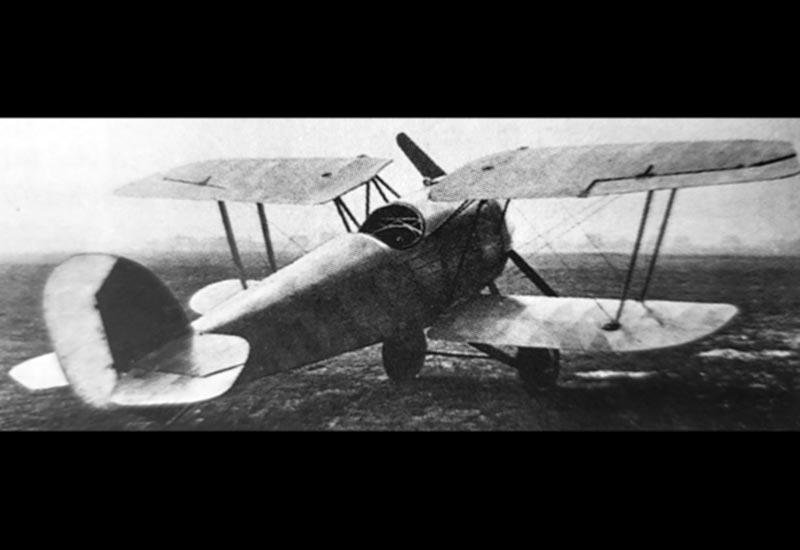 The Kondor D.6 attempted to remedy the issue of forward-upward visibility for the pilot by completely removing the center-section of the upper wing span - it was not successful.

With the German Empire having lost much of its battlefield advantage heading into 1918, authorities sought all manner of possible war-winning designs before the end. Kondor Flugzeugwerke had attempted, on several occasions through The Great War, to deliver to the German air service a viable biplane / triplane fighter but failed on at least three notable attempts - the "Dreidecker", the D.1, and its related D.2 (all detailed elsewhere on this site). Next in the line of Kondor fighters became the "D.6" prototype which was drawn up by Walter Rethel and constructed for flight testing as soon as the summer of 1918 - in what would become the war's final year.

The D.6 was something of a departure from previous Kondor offerings for its radical attempt to improve the pilot's forward / upward visibility in air combat. Biplanes held inherently poor forward / upward visibility due to the cockpit placement behind the wing pairing and under the upper wing member. To add to this the cockpit was also set behind the engine installation which added length ahead of the pilot and forced him to peer out over the nose of his aircraft. An airman that spotted his prey first certainly held an advantage in a dogfight so Kondor attempt to address this issue by a complete modification of the upper wing assembly.

Typical biplane designs simply "cut-out" a small curved section of the upper wing but left the mainplane more or less largely intact as a single spanning unit. However, the D.6 was intended to provide the pilot with much-improved vision out-of-the-cockpit by completely deleting the center section of the upper wing, leaving the inside ends of this split plane now reinforced at the upper surface of the fuselage by a collection of small struts.

On the whole, the biplane retained many of the common qualities of fighters of the period: unequal-span wings, parallel struts, a fixed undercarriage, and a forward-set engine. The tail unit utilized the tried-and-true cruciform plane pattern and the undercarriage was of a "tail-dragger" arrangement typical of the period. The single-seat cockpit was featured just ahead of midships and aft of the engine installation. Power was from an Oberursel Ur III series rotary engine of 145 horsepower and this was used to drive a two-bladed propeller unit at the nose. A steel-tube framework made up the skeletal workings of this aircraft while metal, wood, and fabric covering were used wherever else appropriate.

As was the case with most all of the late-war German fighters, standard armament of the D.6 was to be 2 x 7.92mm LMG 08/15 machine guns synchronized to fire through the spinning propeller blades. These were installed on fixed mountings overlooking the nose section with iron crosshairs provided to help the pilot zero his guns in on a target. Jams were cleared manually and the guns were simply air-cooled while given a limited stock of ammunition to work from.

The prototype D.6 was put through, what ended up being, a short period of flight-testing in mid-1918 which yielded lack-luster results. Drag was increased significantly at the split upper wing member and there were concerns of the strength of the now-weakened upper mainplane, particularly at the connection points at the fuselage. As soon as the D.6 arrived it was gone for little to no additional testing appears to have occurred in the months leading up to the end of the war - which arrived in the Armistice of November 1918. It certainly was never a serious candidate for serial production by the German air service - this despite the desperation.

(Showcased performance specifications pertain to the base Kondor D.VI production variant. Compare this aircraft entry against any other in our database. View aircraft by powerplant type)
PROPOSED:
2 x 7.92mm LMG 08/15 machine guns synchronized to fire through the spinning propeller blades.