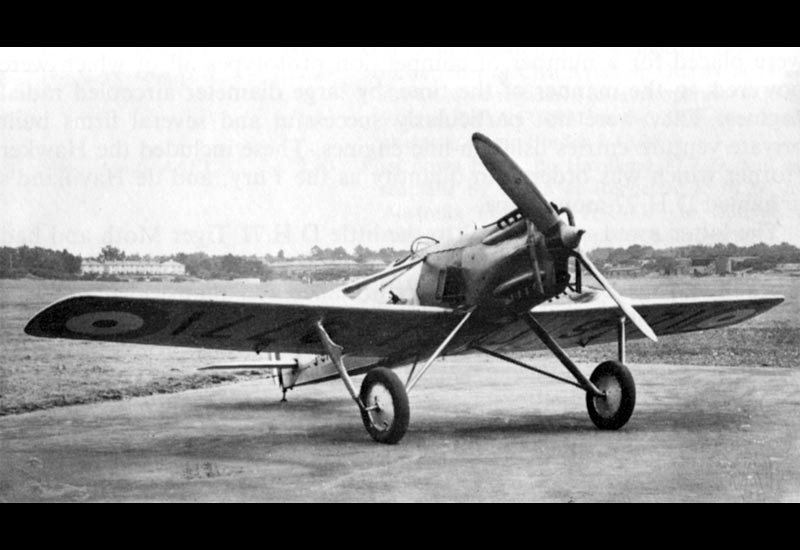 The de Havilland DH.77 was one of the contenders for a British Air Ministry specification seeking an all-modern interceptor design.

Authored By: Staff Writer | Last Edited: 04/25/2019 | Content ©www.MilitaryFactory.com | The following text is exclusive to this site.
In 1927, the British Air Ministry finalized its Specification F.20/27 which sought a lightweight single-seat interceptor aircraft with good rate-of-climb. This specification took over the earlier standing order of F.9/26 from 1926 which called for a "day and night zone fighter" aircraft. Among the responding defense players - Armstrong Whitworth, Bristol, Fairey, Hawker, Saunders, Vickers, and Westland - became the storied concern of de Havilland. The company put forth the "DH.77", a monoplane fighter attributed to W.G. Carter and Major F.B. Halford. A first flight of the aircraft was recorded on July 11th, 1929.

The end-product was of a sleek appearance by late-1920s standards. The fuselage was slim and aerodynamically refined where possible. The engine was fitted to the nose in the usual way and a conventional single-finned plane arrangement was featured at the tail. The wing mainplanes were straight, low-mounted, and fitted slightly ahead of midships. The open-air cockpit, seating one, was also set ahead of the midway point of the fuselage. With the monoplane wings seated low in the arrangement, the aircraft gave the pilot much improved vision out-of-the-cockpit when compared with contemporary biplane types. The undercarriage was fixed, wheeled at the two main members, and of the "tail-dragger" arrangement (a tail skid was used to bring up the rear). Empty listed weight became 1,655lb against an MTOW of 2,300lb.

Dimensions included a length of 24.4 feet, a wingspan of 32.1 feet, and a height of 8 feet. Internally, the lightweight fighter was powered by a Napier "Rapier I" 16-cylinder air-cooled H series engine outputting 300 horsepower and driving a two-bladed propeller unit. Of note was the engine's supercharged status and low-profile design. Performance specs included a maximum speed of 205 miles per hour, a service ceiling up to 26,000 feet, and a rate-of-climb (and interceptor's most important quality) of 1,885 feet-per-minute.

As a military-minded interceptor - that is an aircraft charged with meeting an inbound aerial threat head-on in short order - the DH.77's armament comprised the typical installation of 2 x 0.303 caliber Vickers Machine Guns synchronized to fire from the nose section through the spinning propeller blades. These weapons were installed in fixed, forward-firing mounts.

In keeping with the period, the aircraft was completed in "mixed construction" so metal, fabric, and wood all figured into its form. The wings held two internal steel spars for the needed strength and were further braced by wooden ribs. The entire surface area of the planes were then covered over in fabric. The fuselage was given a steel tube framework and also surrounded by typical wood ribs and over this was set into place the fabric skin.

Only a single flying prototype of this aircraft was ever completed and the Air Ministry took it on (via direct purchase) for the usual testing regime to see what they had - and what could be got from the design in full. The sole specimen survived the official trials but was ultimately passed on. The standing interceptor requirement was later filled by the classic Hawker "Fury" biplane fighter (detailed elsewhere on this site) and the frame of the DH.77 saw continued service as a Napier engine test bed until her time had officially run out by the mid-1930s.

(Showcased performance specifications pertain to the base de Havilland DH.77 production variant. Compare this aircraft entry against any other in our database. View aircraft by powerplant type)
PROPOSED:
2 x 0.303 Vickers Machine Guns synchronized to fire through the spinning propeller blades.