The Blackburn B.44 was proposed as a single-seat, single-engine floatplane fighter during World War 2 - it was not furthered.

Authored By: Staff Writer | Last Edited: 06/14/2018 | Content ©www.MilitaryFactory.com | The following text is exclusive to this site. 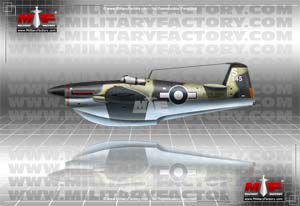 For a time in military aviation history there was a particular focus on the "floatplane fighter", an offensive-minded attack design that attempted to maintain the best qualities of a floatplane (sea-based landings and take-offs, operational range) and a fighter (stable gun platform, general performance, maneuverability). In November 1942, with World War 2 already raging, the British Air Ministry developed Specification N.2/42 for this very type of combat aircraft and Blackburn delivered what became the "B.44".

In its earlier B.20 and B.40 projects, both of which were flying boats, the company centered the designs on a retractable hull which could be lowered for landing and raised when flying, thus improving aerodynamic efficiency in the latter action. The concept was proven somewhat through the B.20 prototype (detailed elsewhere on this site) but this aircraft was lost in testing (killing three of its six crew). The B.40 was not developed beyond drawings as interest in the type soon waned on the part of the Royal Air Force (RAF).

The same concept was now driven through a single-seat, single-engine fighter design which could operate near the frontlines in areas where there were next-to-now support systems available - namely wide expanses of ocean where small islands (either natural or man-made) were all that could be had.

Two prototypes were ordered by the Air Ministry and these would be powered by the Napier "Sabre" engine outputting 2,240 horsepower and driving a pair of three-bladed, contra-rotating propellers at the nose. To expedite development, much of the existing work done on the Blackburn Firebrand land-based fighter (detailed elsewhere on this site) was used in constructing the B.44 floatplane fighter. The basic airframe was to have low-set monoplane wings seated ahead of midships. The engine would be positioned at front in the traditional way and the tail would be made up of a single vertical fin and low-mounted, forward-set horizontal stabilizers. As the boat-like hull was built into the fuselage's design (supported / retracted by a system of struts) no complex landing gear arrangement was needed. Two outboard (folding) pontoons were set near the ends of each wing for stability when running on the water's surface. The pilot sat under a framed canopy ahead of midships with the fuselage spine running directly behind his position, the extra internal volume adding fuel stores for longer operation ranges. Armament centered on 4 x 20mm automatic cannons (two fitted to each wing) and provision was to be made for carrying 2 x 500lb drop bombs under the wings.

As the war progressed, and economically-minded "Escort Carriers" proved viable warships for carrying warplanes to-and-fro, the need for the B.44 lessened. Additionally, proven in the actions of the Pacific Theater, the Allies were able to construct air bases at speed in areas where it was not thought possible - providing forward operating areas for future assaults or assault support in general. As such, the B.44 was abandoned after only a full-scale mockup had been completed.

Of particular note in the development of the B.44 floatplane fighter is the lack of faith had by RAF officials in the design with concerns ranging from on-water stability and water spray at the engine and propeller components to general control factors when in flight. The work on the B.44 was not even publicized until the post-war period in 1947.©MilitaryFactory.com
Note: The above text is EXCLUSIVE to the site www.MilitaryFactory.com. It is the product of many hours of research and work made possible with the help of contributors, veterans, insiders, and topic specialists. If you happen upon this text anywhere else on the internet or in print, please let us know at MilitaryFactory AT gmail DOT com so that we may take appropriate action against the offender / offending site and continue to protect this original work.
Advertisements

(Showcased performance specifications pertain to the base Blackburn B.44 production variant. Performance specifications showcased above are subject to environmental factors as well as aircraft configuration. Estimates are made when Real Data not available. Compare this aircraft entry against any other in our database or View aircraft by powerplant type)
PROPOSED:
4 x 20mm cannons (two per wing mainplane).

A bombload of up to 2 x 500lb conventional drop bombs, one hardpoint per wing.

General Assessment
Firepower
Performance
Survivability
Versatility
Impact
Values are derrived from a variety of categories related to the design, overall function, and historical influence of this aircraft in aviation history.
Overall Rating
The overall rating takes into account over 60 individual factors related to this aircraft entry.
26
Rating is out of a possible 100 points.
Relative Maximum Speed
Hi: 400mph
Lo: 200mph
This entry's maximum listed speed (360mph). 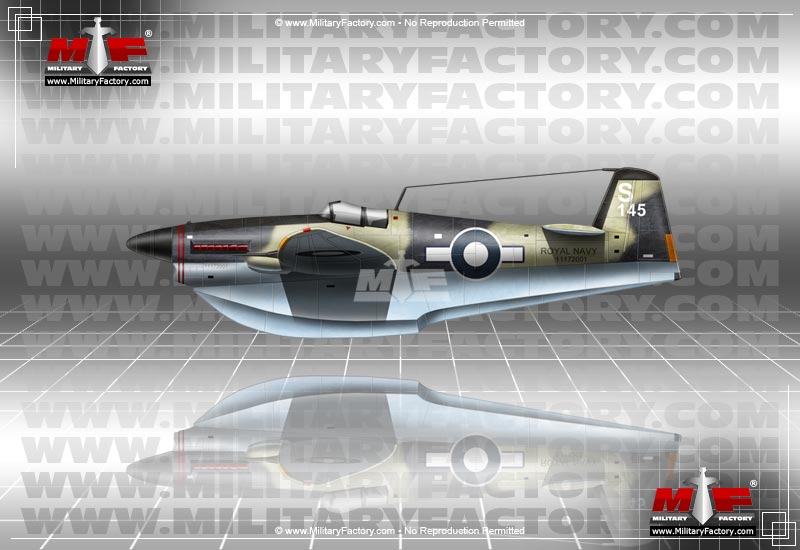