Just one of the two contracted XP-47J high-speed fighter prototypes were realized before the project came to an end. 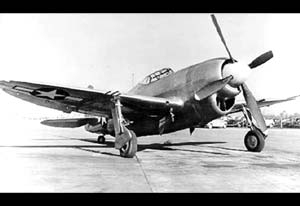 The classic Republic P-47 "Thunderbolt" fighter of World War 2-fame went through many revisions during its time aloft. Born from the company's work on the P-43 "Lancer", the P-47 entered service with the same "razorback" dorsal spine and large nose-mounted air-cooled radial engine. In time, the "Jug" was advanced to include a bubble-style canopy and higher-performance. Some became true thoroughbreds and excelled at interception duties while others performed exceptionally in the ground-attack role. As either a fighter or fighter-bomber, there were few designs of the war that could match the return-of-investment seen in the American P-47, its design attributed to Alexander Kartveli.

During all this, the U.S. Army was always on the lookout for more of everything and, in November of 1942, contacted Republic to engineer a lighter-weight, higher-performing version of its P-47 (entering official service that same month). This new aircraft would fit an uprated engine in the nose that featured additional cooling and water injection for maximum power at altitude. Weight would be saved wherever possible including armament and fuel. An Army contract issued on June 18th, 1943 covered two XP-47J prototypes.

Engineers returned with a revised form of their P-47 which was designated "XP-47J". The design's engine cowling was refined with a smaller frontal area and this tight cover housed the Pratt & Whitney R-2800-57(C) engine within. The engine outputted at 2,800 horsepower and would drive a standard four-bladed propeller unit. Both the engine and propeller unit were off-the-shelf, in-service products which would aid in mass production of the aircraft. For weight savings, the wing mainplanes were revised to a lighter-constructed form and one of the four machine guns in each wing were deleted (as were some of the internal fuel stores which, in turn, reduced operational ranges). Additionally, some cockpit equipment was removed and the dorsal area aft of the cockpit was cut down. A true bubble-style canopy was not in play as of yet - instead a revised version of the basic P-47 framed canopy was added and this did help in improving vision out-of-the-cockpit for the pilot.

The first XP-47J had its R-2800 engine mounted further ahead in the airframe and the installation was forced-cooled by an intake fan built into in the propeller's spinner. The exhaust ejection system was designed to pull additional thrust from the air flow and the turbosupercharger was aspirated by a new air scoop mounted under the chin of the aircraft.©MilitaryFactory.com
Advertisements

The second prototype was to feature a true bubble canopy and perhaps a contra-rotating propeller unit to squeeze even more speed out of the design. However, budget issues curtailed its development and it was cancelled in March of 1944.

A first-flight of the XP-47J prototype was had in November 26th, 1943. It did not go airborne again until March of 1944 at which point it revealed itself to be one of the fastest prop-driven aircraft of the period (and the war for that matter) at 500 miles per hour in level flight. During testing on August 4th, 1944, the aircraft - now fitted with the GE CH-5 turbosupercharger - recorded a maximum speed of 505 miles per hour while flying at over 34,500 feet, the fastest speeds ever for a propeller-driven aircraft. Such capabilities gave the XP-47J the nickname of "Superbolt".

Notably, in USAAF hands during testing, the XP-47J is said to never have been able to exceed speeds beyond 493mph.

XP-47J remained a viable fighter development until it was found that another Republic offering, the XP-72 "Ultrabolt" (detailed elsewhere on this site) was showing more promise and more company personnel were appropriately being assigned to this venture instead of the Superbolt. Additionally, Army authorities were put off by the fact that Republic lines would have to be considerably retooled to accommodate mass production for the proposed XP-47J - there was only some 30% commonality of parts between base, in-service P-47 fighters and the proposed XP-47J. As such, this fast fighter prototype born from the P-47 line died before the end of the war in 1945.©MilitaryFactory.com
Note: The above text is EXCLUSIVE to the site www.MilitaryFactory.com. It is the product of many hours of research and work made possible with the help of contributors, veterans, insiders, and topic specialists. If you happen upon this text anywhere else on the internet or in print, please let us know at MilitaryFactory AT gmail DOT com so that we may take appropriate action against the offender / offending site and continue to protect this original work.
Advertisements

(Showcased performance specifications pertain to the Republic XP-47J production variant. Performance specifications showcased above are subject to environmental factors as well as aircraft configuration. Estimates are made when Real Data not available. Compare this aircraft entry against any other in our database or View aircraft by powerplant type)
PROPOSED:
6 x 0.50 caliber Browning heavy machine guns (three to a wing).

XP-47J "Superbolt" - Base Project Designation; two prototypes contracted for though only single flyable example was completed. 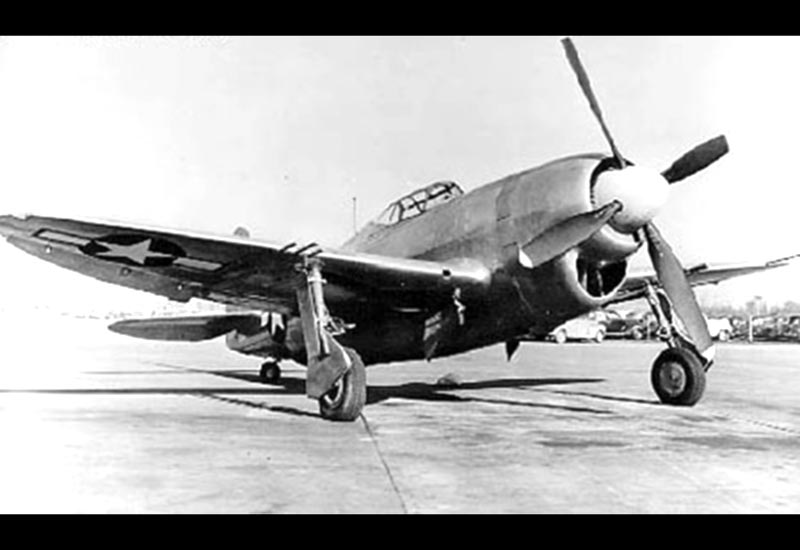