Just two conversion models of the Northrop XP-61E were completed from the basic P-61 Black Widow framework during World War 2.

Authored By: Staff Writer | Last Edited: 08/26/2021 | Content ©www.MilitaryFactory.com | The following text is exclusive to this site. 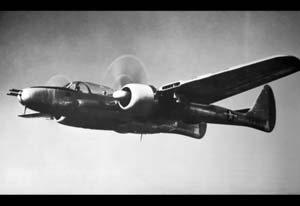 The arrival of the high-flying, long-range Boeing B-29 "Superfortress" strategic bomber in May of 1944 led United States Army officials to consider a long-range fighter escort to protect their expensive, technology-laden investment. Northrop managed to introduce their impressive P-61 "Black Widow" that same year and this marked the first purpose-built American night fighter. Engineers were convinced of the merits of the large fighter as a long-range bomber escort and the company championed the idea to Army officials. Enough interest was had in the endeavor to result in the "XP-61E", a modified version of the successful night fighter.

A pair of P-61B-10 aircraft were set aside for conversion to the long-range, high-altitude bomber escort role. The dorsal turret was removed and the upper fuselage cut down to produce a slimmer, lighter and more aerodynamically refined form. No longer requiring radar (the fighter would be a daytime operator), the nose assembly was cleared of the radar fit and in its place a battery of 4 x 0.50 caliber Browning heavy machine guns installed (the ventral battery of 4 x 20mm cannons seen in the original P-61 fighter was retained). As no radar was carried, the radar operator crewman was expendable which led to a reduction of total crew to two and these personnel were now seated in tandem under a shared bubble-style canopy. More internal fuel stores were added to help increase the aircraft's range - a requirement for the long-range bomber escort role.

The result was a powerful, reasonably fast and well-ranged performer with sleek contours and a promising future. The aircraft held a wingspan of 66 feet with a length of 49.6 feet and height of 13.4 feet. Empty weight was 21,350lb against a laded weight of 40,181lb. Power was from 2 x Pratt & Whitney R-2800-65 radial piston engines of 2,000 horsepower each propelling the aircraft to speeds of 376 miles per hour. Rate-of-climb was 2,500 feet-per-minute with a service ceiling of 30,000 feet and range out to 2,250 miles.

A first-flight was had on January 3rd, 1945. However, in April of that year, the program suffered a considerable setback when the second prototype was lost after an attempted full-power take-off test which resulted in too much damage to save the airframe (the test crew survived after a belly landing).

The changing face of war also meant that the XP-61E was never furthered beyond the pair of flyable prototypes: the B-29 found few challengers in the Pacific and was never fielded over Europe against Germany. Also the age of the jet fighter had arrived which limited the long-term commitment on the part of the Army to prop-driven types like the XP-61E. The long-range escort role was fulfilled, at least for the interim, by the stellar, prop-driven North American F-82 "Twin Mustang".

The design became the last fighter-minded offshoot of the Black Widow series and never saw the light of day as an operational-level product. One of the XP-61E aircraft was reworked by Northrop to become the XF-15 prototype which, in turn, became the F-15 "Reporter" in USAF service - though only thirty-six of the type were acquired. The P-61 itself was retired as quickly as 1954 though not after some 700 were produced.©MilitaryFactory.com
Note: The above text is EXCLUSIVE to the site www.MilitaryFactory.com. It is the product of many hours of research and work made possible with the help of contributors, veterans, insiders, and topic specialists. If you happen upon this text anywhere else on the internet or in print, please let us know at MilitaryFactory AT gmail DOT com so that we may take appropriate action against the offender / offending site and continue to protect this original work.
Advertisements

(Showcased performance specifications pertain to the Northrop XP-61E production variant. Performance specifications showcased above are subject to environmental factors as well as aircraft configuration. Estimates are made when Real Data not available. Compare this aircraft entry against any other in our database or View aircraft by powerplant type)
PROPOSED:
4 x 0.50 caliber heavy machine guns in nose installation
4 x 20mm cannons in ventral gun pack 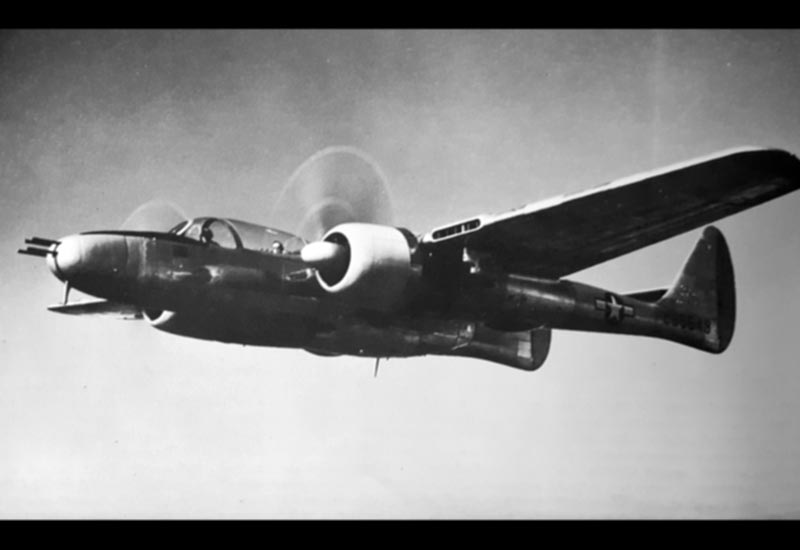