The de Havilland Super Mosquito was to carry-on the excellent qualities of the earlier DH.98 Mosquito platform. 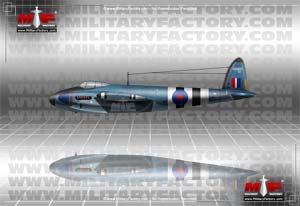 The de Havilland Mosquito went on to become one of the finest warplanes of World War 2 (1939-1945) with its multi-role approach. The two-seat, twin-engined platform excelled as a fighter-bomber, reconnaissance mount and night intruder across many major production marks for its part in the years-long conflict. It was only natural, therefore, that the base design was to be considered for a myriad of other related projects including a dedicated high-speed medium bomber form and a jet-powered fighter offering.

The DH.99 was drawn up to fulfill a fast medium bomber requirement (B.11/41) of 1941, the same specification that drove the competing twin-engined Hawker P.1005. de Havilland engineers concluded that their two-seat heavy fighter could be converted to the high-speed bomber role using the same Napier Sabre IV engines (2,180 horsepower output each) as the proposed P.1005 and built upon the form of the impressive, in-service DH.98 Mosquito design in short order. The evolving project was initially handed the designation of "DH.99" and then this changed to "DH.101". Beyond showcasing slightly larger dimensions, the DH.101 would also carry a complete operating crew of three (as opposed to the Mosquito's two).

Engineers estimated a maximum speed of nearly 420 miles per hour for their new aircraft. 4,000lb of conventional drop stores would be carried internally and an additional 2,000lb would be carried externally (under the wings). External fuel tanks could also be mounted to help increase the bomber's range which would prove helpful over the vast airspaces of Europe, the Pacific and all points in between. In form, the DH.101 mimicked the design lines of the earlier DH.98 quite closely with its sleek fuselage, forward-set wing mainplanes and single-finned tail unit. Each engine would drive a four-bladed propeller unit in contra-rotating fashion, eliminating inherent torque and thusly increasing control and stability. The undercarriage would be of a tail-dragger arrangement and the crew would all sit under a teardrop-shaped canopy just aft of the short nosecone assembly.

As the project progressed, it became apparent that Napier's engine commitments elsewhere in the war would severely restrict availability of the intended Sabre engine for in-development projects like the DH.101. As such, the Bristol Centaurus radial piston engine was selected as a replacement but it was soon realized that this engine fit would play poorly within the design specs required of the de Havilland fast medium bomber - leading to the abandonment of the DH.101.

From the de Havilland drawing boards arrived a new Mosquito development whose dimensions were more in line with the original DH.98. Power would stem from a pair of Rolls-Royce Merlin 61 inline engines. Instead of the design being pushed as a fast medium bomber, the aircraft - designated DH.102 - was slated to succeed the primary DH.98 fighter-bomber marks then in service. It still carried a crew of three but proposed standard armament now centered on 4 x 20mm and 4 x 40mm automatic cannons for a considerable frontal "punch" against ground- and air-based targets alike.

Two DH.102 prototypes were covered under Specification B.4/42 in 1942 but interest in the design soon waned despite the progress showcased in the construction phase. The DH.102 ultimately faced cancellation on December 26th, 1942 and ended all hopes for a Super Mosquito product.
Advertisements

General Assessment
Firepower
Performance
Survivability
Versatility
Impact
Values are derrived from a variety of categories related to the design, overall function, and historical influence of this aircraft in aviation history.
Overall Rating
The overall rating takes into account over 60 individual factors related to this aircraft entry.
74
Rating is out of a possible 100 points.
Relative Maximum Speed
Hi: 500mph
Lo: 250mph
This entry's maximum listed speed (416mph). 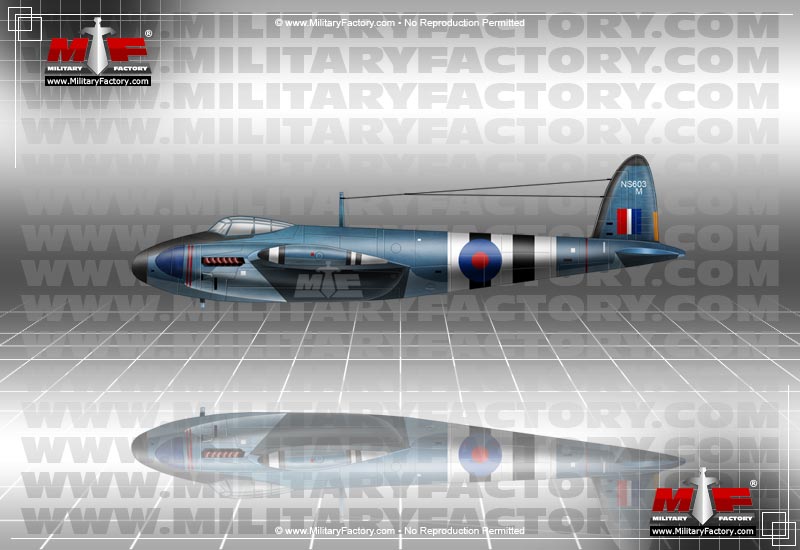