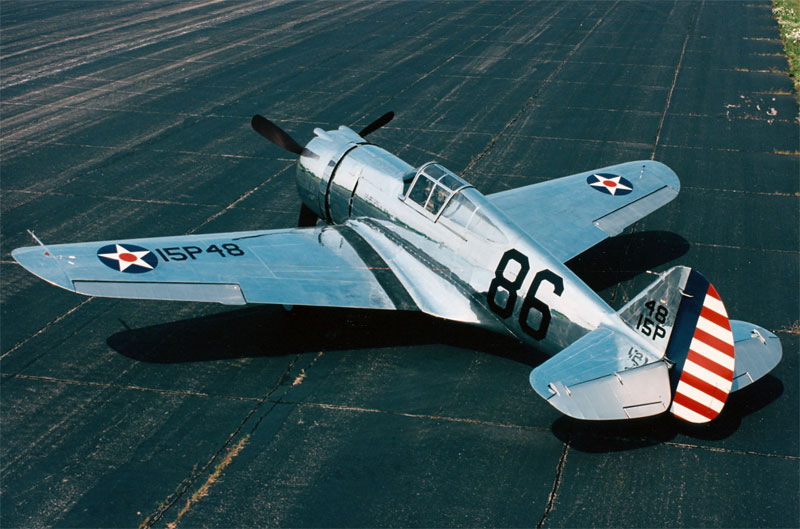 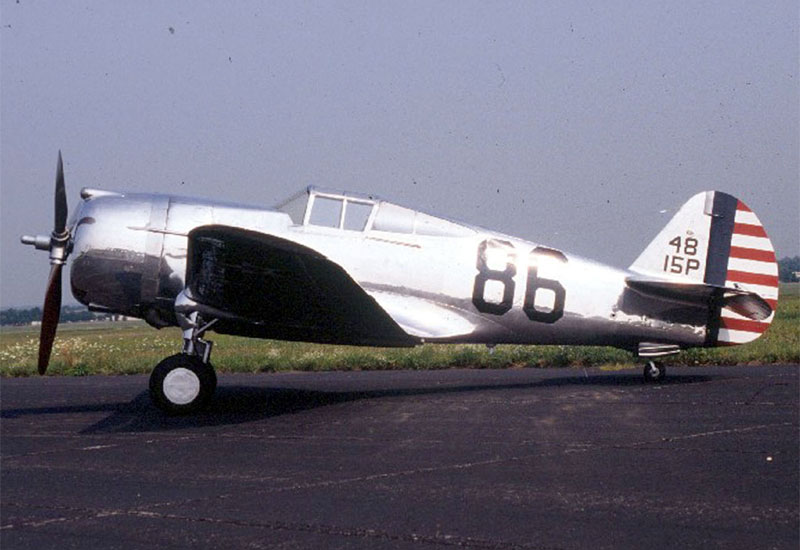 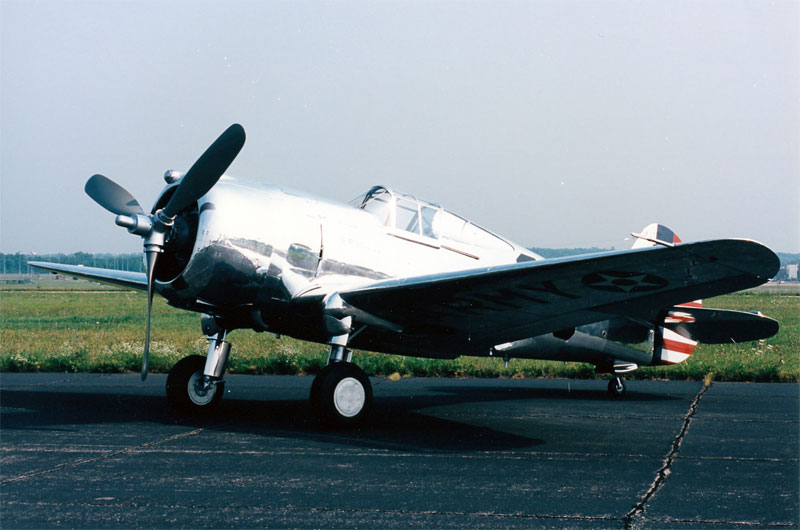 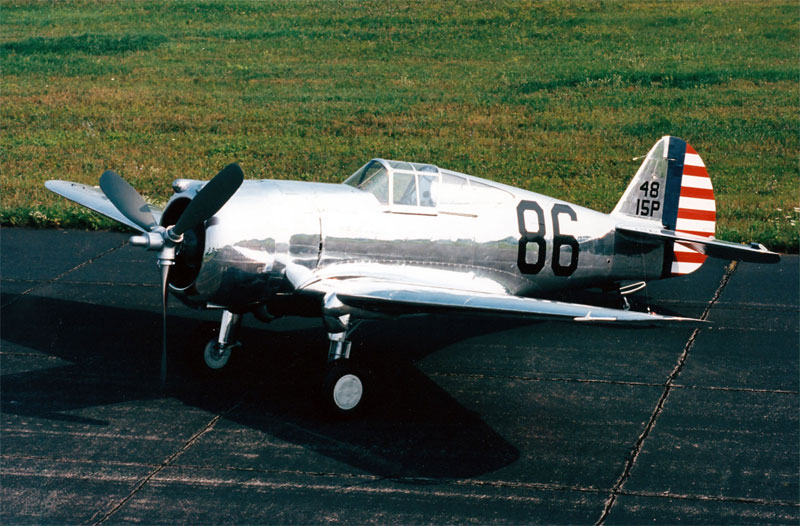 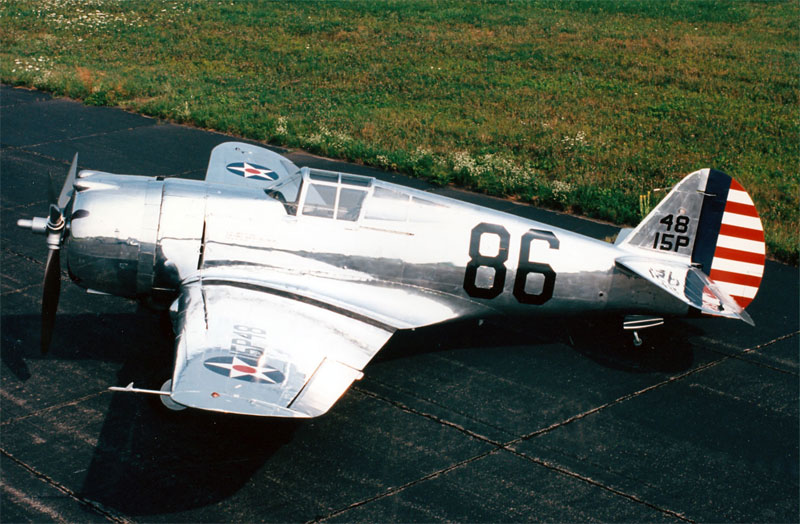 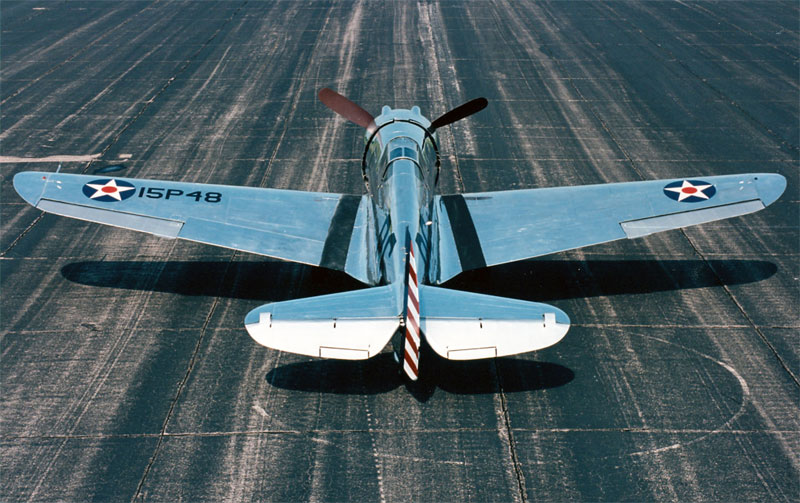 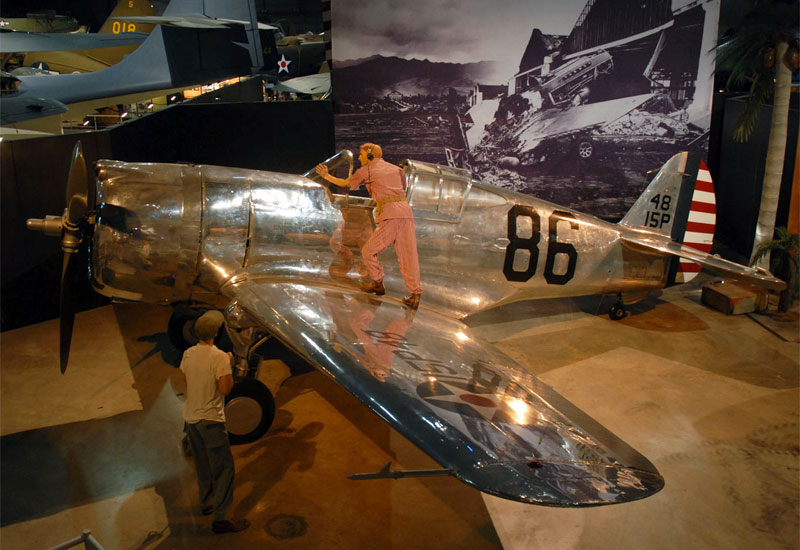 A Curtiss P-36 Hawk fighter on display at the USAF Museum in Dayton Ohio, USA
8 / 13 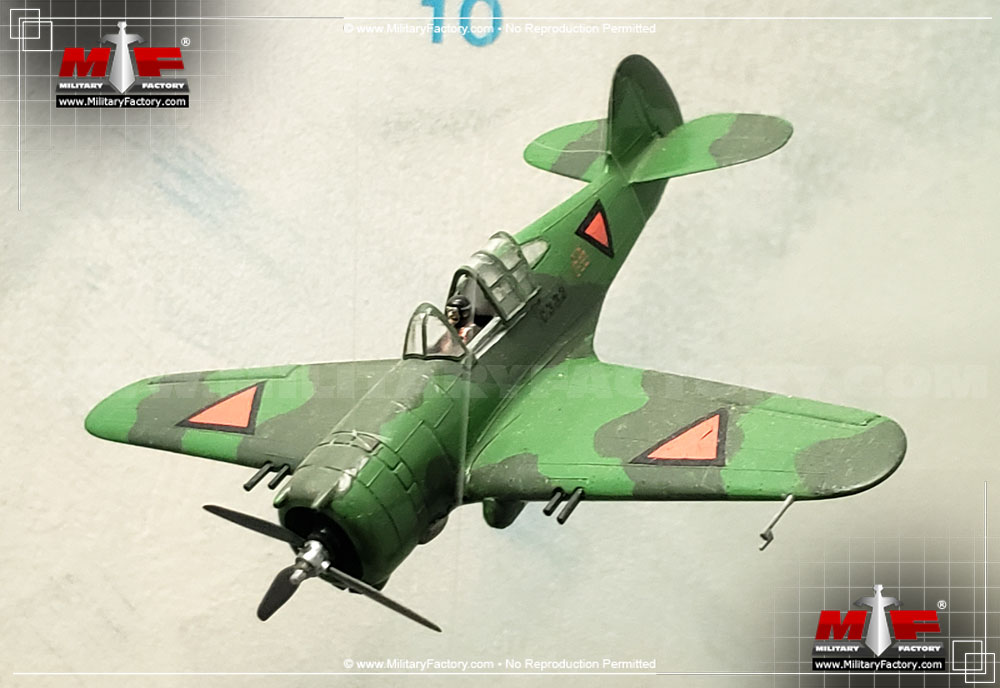 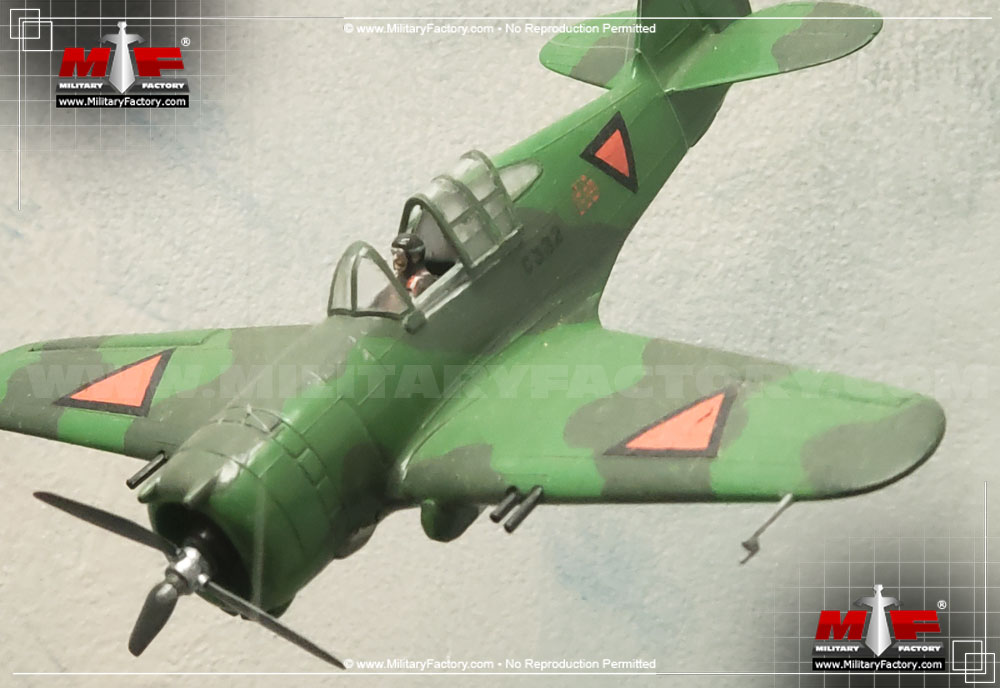 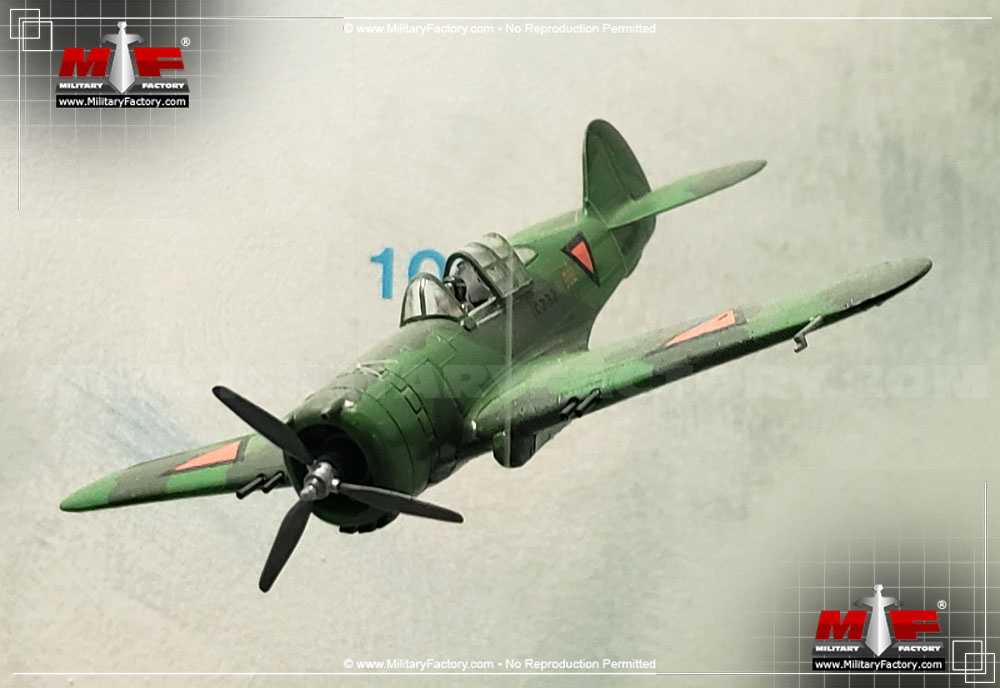 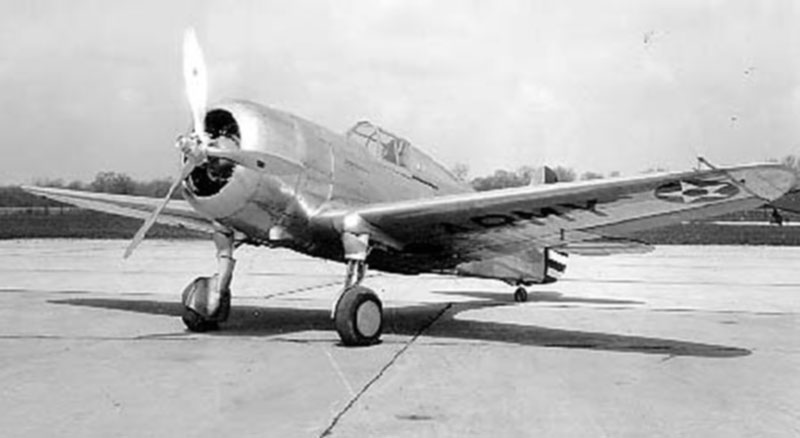 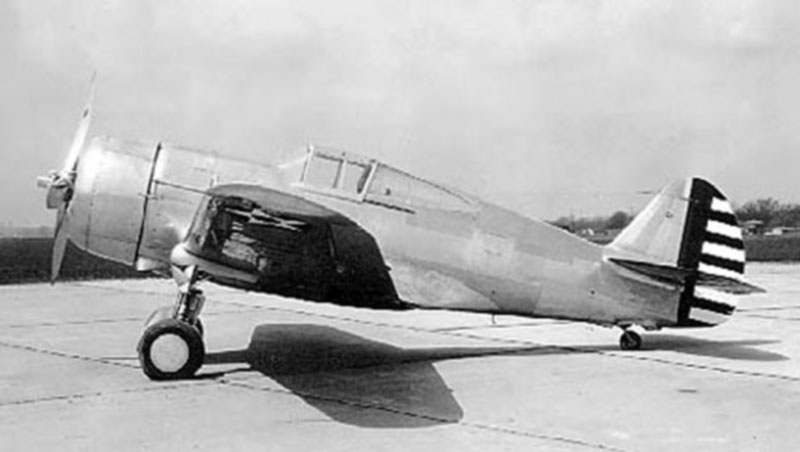 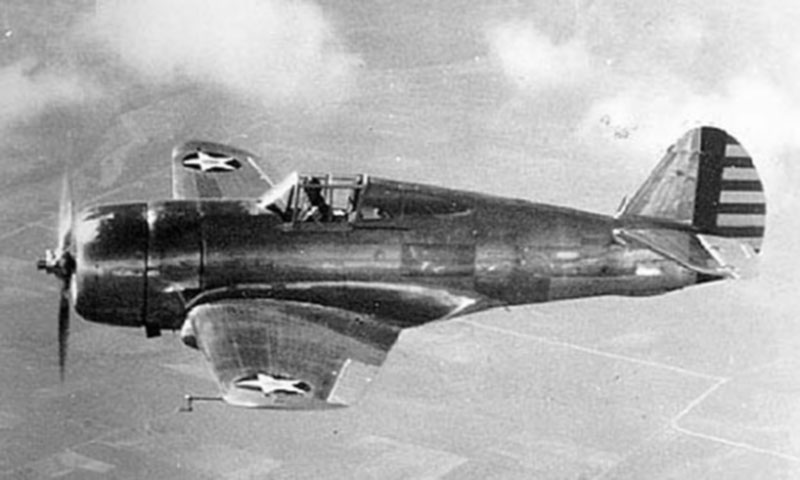 Left side view of the Curtiss P-36 Hawk fighter in flight.
❮ ❯

The Curtiss P-36 Hawk single-seat monoplane fighter was operated in number before - and during - World War 2.

The Curtiss P-36 Hawk aircraft saw considerable operational service in the years leading up to, and during, World War 2. Its basic appearance was not unlike Curtiss' more famous product - the P-40 Warhawk - and sported a heavily framed canopy and raise fuselage spine. Though not an overly impressive aircraft by any stretch, the P-36 Hawk nonetheless was a serviceable mount that could - at the very least - help national air forces compete against the likes of the Axis powers. Donovan Berlin was attributed with the design of the aircraft and a first flight was achieved on May 6th, 1935. The aircraft was formally introduced into service in 1938 and it was not - amazingly - fully retired until 1954, this with Argentina. Despite the 215 or so P-36s produced for the United States Army Air Corps (USAAC), the Hawk made more of a splash in foreign hands (as the Hawk 75 and Mohawk) which accounted for 900 examples.

Design of the P-36 was conventional though it did promote several rather evolutionary features for its time including an enclosed cockpit and a powered, fully-retractable undercarriage. The engine was traditional mounted at the front of the fuselage and powered a three-blade propeller assembly. The fuselage was tubular and tapered at the rear. The wings were low-mounted and straight in their design with rounded wing tips. The cockpit was set above and behind the wing assemblies and offered up adequate views. The fuselage spine was raised, however, which made a clear view to the "six" nearly impossible. The canopy was also heavily framed in true 1930s fashion. The empennage consisted of a single, rounded vertical tail fin and applicable rounded horizontal planes. The undercarriage was conventional with two single-wheeled main landing gear legs and a small tail wheel for ground maneuvering.

Basic armament was rather weak by comparison to other American warplanes of the war, consisting of a 1 x 0.50 caliber M2 Browning heavy machine gun and 1 x 0.30 caliber M1919 Browning general purpose machine gun. Later production versions featured 2 x 0.50 caliber heavy machine guns in the engine cowl synchronized to fire through the spinning propeller blades. This was further supplemented by the addition of 2 or 4 x 0.30 caliber machine guns in the wings. Still later production models were given provision for 2 x underwing drop bombs (100lbs each) or 3 x 50lb bombs or 5 x 30lb bombs allowing pilots to undertake strike missions with their fighter.

Power for the P-36A production model was provided for by a single Pratt & Whitney R-1830-17 Twin Wasp air-cooled radial piston engine of 1,050 horsepower. Radial piston engines in the war gave good performance while being able to withstand much more punishment than their sexier liquid-cooled brethren. Performance specifications included a top speed of 313 miles per hour with a range of 625 miles and a service ceiling of approximately 32,700 feet. Rate of climb was 3,400 feet per minute.

The P-36 was originally born as the Curtiss company Model 75A which was used to demonstrate the design's viability as well as evaluate various available powerplants. The Model 75B was similar in scope and mounted a Wright R-1820 radial piston engine. The Model 75D was completed with a Wright Whirlwind R-1670 series radial piston engine. The Model 75H designation was a Curtiss marker for export versions and these were heavily simplified in their construction, featuring a fixed undercarriage, and only two were produced. A supercharger was tested in the Model 75J while the Model 75R was evaluated with a turbo-supercharger but never furthered. The Model 75K was a proposed evaluation model intended to fit a Pratt & Whitney R-2180 Twin Hornet radial piston engine but was never constructed. The Model 75P was to be the official P-36 production model and finished with an Allison V-1710 liquid-cooled engine but this went on to become the P-40 Warhawk.

The US Army Air Corps finally received their prototype as the Y1P-36 which was the Model 75E in Curtiss company nomenclature. This prototype was completed with a Pratt & Whitney R-1830 series engine. The initial production version of the P-36 therefore became the P-36A (Model 75L) for the USAAC and delivered with 4 x 0.30 caliber machine guns in the wing. A one-off model then followed as the P-36B which was essentially the P-36A fitted with a Pratt & Whitney R-1830-25 radial engine of 1,100 horsepower. After testing, this model was reverted back to P-36A form. The P-36C saw an additional pair of 0.30 machine guns added one to a wing to help increase overall firepower as well as a Pratt & Whitney R-1830-17 series radial of 1,200 horsepower. However, since the original wing design lacked the internal spacing for additional ammunition, boxes were installed under the wings.
Advertisements

Several experimental mounts existed but never saw serial production. These included the XP-36D with its 2 x 0.50 caliber machine guns in the nose and 4 x 0.30 caliber machine guns in the wings, the XP-36E and up to 8 x 0.30 caliber machine guns and the XP-36F which attempted to fit 2 x 23mm Madsen cannons under the wings. The latter version, while vastly improved in firepower, was dropped from contention for the weight gain of the cannon armament proved detrimental to the P-36 airframe. The XP-37 was given an Allison V-1710 inline piston engine and saw its cockpit moved further aft. The XP-37 was further developed into 13 examples of the YP-37 for testing. The XP-42 (Model 75S) was an experimental model with a specially devised aerodynamic engine cowling.

Export Hawks were known as the Hawk 75. The initial production order for France became Hawk 75A-1 models and were delivered with R-1830-SC-6 radials of 900 horsepower. Armament was 4 x 7.5mm machine guns and approximately 100 were produced. The Hawk 75A-2 were similar though mounting R-1830-SC-G/R-1830-SC3-G radials of 1,050 horsepower and 6 x 7.5mm machine guns. Again some 100 of the type were produced. The Hawk 75A-3 were built in 135 examples and were generally similar to the preceding A-2 models. The Hawk 75A-4 were similar to the A-2 models but delivered with the Wright R-1820-G205A Cyclone radial engine instead. These outputted at 1,200 horsepower and a total of 285 were contracts. Only 81 of these eventually made it to French forces. The Hawk 75 saw combat actions against the German Luftwaffe in the Battle of France and were the first to claim a German air victory. After the Fall of France, surviving French Hawks were flown to Britain to continue the fight.

China produced the Hawk under license and these were noted as the Hawk 75A-5. There were generally similar to the preceding French A-4 models. When production facilities were in danger, manufacture of the aircraft moved to India where they promptly reemerged as the Mohawk IV mark under British control. The Hawk 75A-6 was originally a Norwegian mark but, after the German conquest, these were captured and delivered (sold, not handed over) to allied Finland. Some Luftwaffe pilots were also trained on the type. A tropicalized Hawk version was born in the Hawk 75A-7 mark and destined for the Netherlands East Indies. These fitted 1 x 0.50 caliber heavy machine gun and a 0.30 caliber machine gun in the cowl with up to 4 x 0.30 caliber machine guns in the wings. They were also given provision for the carrying of up to 6 x 50lb bombs and delivered with Wright Cyclone engines of 1,200 horsepower.

Norway was also the recipient of the Hawk 75A-8 and these eventually came to be known under the P-36G designation. They served in the training of Norwegian pilots sent to Canada and completed with R-1820-G205A radials of 1,200 horsepower. G-models eventually found their way to Peru. The Hawk 75A-9 saw combat action with the British in India as were also known as Mohawk IVs. These were originally 10 examples intended for Iran.

A few more "simplified" variants existed for export as the Hawk 75M, Hawk 75N,Hawk 75O and Hawk 75Q. The 75M were produced for and by China with fixed undercarriage systems and Wright R-1820 Cyclone engines. The 75N was delivered to Siam again with a fixed undercarriage. Argentina received the 75O in about 20 examples. The 75Q consisted of two evaluation models for Chinese consideration.

Portugal was another Hawk operator and purchased several despite their neutral position. In March of 1942, the United States delivered 10 P-36A model Hawks to Brazil.

Values are derrived from a variety of categories related to the design, overall function, and historical influence of this aircraft in aviation history.
Overall Rating
The overall rating takes into account over 60 individual factors related to this aircraft entry.
60
Rating is out of a possible 100 points.
Relative Maximum Speed
Hi: 400mph
Lo: 200mph
This entry's maximum listed speed (322mph).