The Kawasaki Ki-108 was designed to fulfill a standing heavy interceptor requirement for the Imperial Japanese Army. 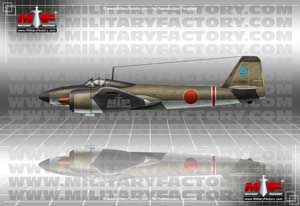 The Ki-102 heavy fighter was introduced late in the Pacific War by the Imperial Japanese Army Air Service (IJAAS) and only 238 of the type were built before the end came in 1945. Intended as a successor to the Ki-45 "Toryu", this twin-engined, two-seat system provided a long-range reach for ground forces and three major variants were planned including a dedicated night-fighter. Ki-102s would go on to see only limited action in the conflict (reserved for homeland defense) making very little impact on the outcome of the war. Its Allied reporting name was "Randy".

From this base design was to come another planned offshoot in the "Ki-108" heavy fighter / high-altitude interceptor. This form was drawn up along the lines of a high-altitude fighter capable of meeting the new, high-flying American heavy bombers - namely the Boeing B-29 "Superfortress" - making their presence known over Japan. Two Ki-102b model series aircraft (nos. seven and eight) were set aside for the Ki-108's development phase. The Ki-102b was also given the improvements enacted in the Ki-102c night-fighter, primarily its lengthened fuselage. Dimensions included a length of 38.4 feet, a height of 12 feet and a span of 51.4 feet. Unlike the Ki-102 - and more like the Ki-96 - the Ki-108 was slated to carry just one crewmember instead of two. As its primary role lay in high-altitude interception, a pressurized cabin became a default requirement as did high-altitude performance. The aircraft would carry 1 x 37mm Ho-203 cannon in the nose assembly and 2 x 20mm Ho.5 cannons buried under the cockpit floor.

The engine of choice became 2 x Mitsubishi Ha-112-II "Ru" 14-cylinder turbosupercharged, air-cooled radials fitted to the wing leading edges, straddling the slim fuselage. Power was 1,500 horsepower maximum during take-off actions and approximately 1,000 horsepower over 32,000 feet. Estimate performance specifications included a maximum speed of 360 miles per hour, a service ceiling of 44,300 feet and a range out to 1,120 miles.
Advertisements

The Ki-108 design, while stemming some from the Ki-102 was also based on another projected Kawasaki heavy fighter - a single-seat, twin-engined form being developed the aforementioned "Ki-96". This model had been in the works since the middle of 1942 and seemed to fit the new IJA requirement rather well so it was pushed forward with some of the qualities of the Ki-102 to make for an all-new aircraft. The Ki-96 was another intended successor to the Ki-45 but failed in this respect - three prototypes were all that was realized of the project.

With that in mind, the Ki-108 became something of a culmination of both the Ki-96 and Ki-102 outings, the Ki-102 borrowing the wings and tail of its progenitor though the Ki-108 given an all-new tail unit. Its cockpit would be hermetically sealed and feature a "double-glazed" canopy so as not to require the engines to produce the needed compressed air. Work on the Ki-108 in 1944 which yielded a prototype for July in rather short order and a second one followed that August. Flight trials were conducted without the intended turbosuperchargers.

Beyond the Ki-108 was the ki-108 KAI given a longer fuselage and wider spanning wing mainplanes (as introduced with the Ki-102-Hei), These were changes meant to improve high-altitude handling and performance so two additional prototypes were contracted for and the first arrived in March of 1945. A second aircraft came in May but the pair simply could not evolve fast enough for Japan's worsening war fortunes and its flight trails ended prematurely with the conclusion of the Pacific War in August 1945. The Ki-108 KAI improved upon overall speed (375 miles per hour) and range (1,370 miles).

The four aircraft were all that come from the Ki-108 endeavor, its design never truly finalized and its combat potential remaining unfulfilled.
Advertisements

(Showcased performance specifications pertain to the base Kawasaki Ki-108 production variant. Compare this aircraft entry against any other in our database or View aircraft by powerplant type)
PROPOSED:
1 x 37mm Ho-203 cannon in nose
2 x 20mm Ho-5 cannons in fuselage 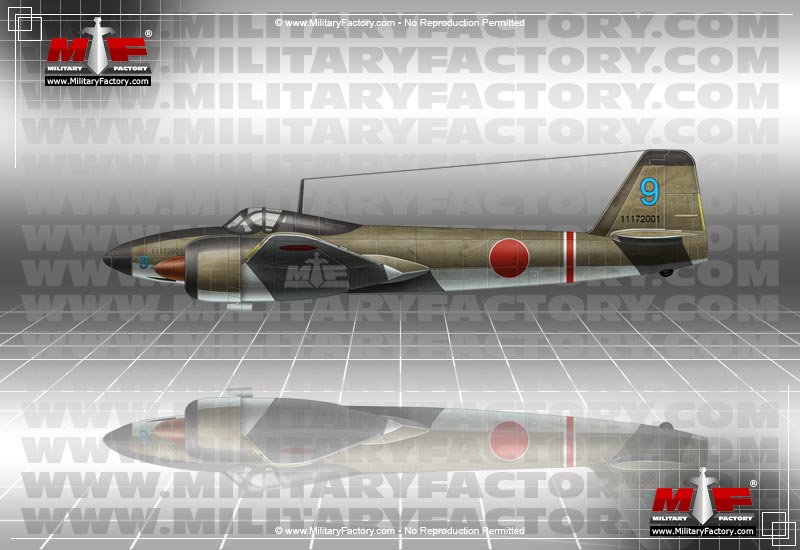