Since 1937, Japanese engineers were working on the ramjet concept that was to power the proposed Kayaba Katsuodori ramjet-and-rocket-powered interceptor of World War 2.

Authored By: Staff Writer | Last Edited: 05/10/2021 | Content ©www.MilitaryFactory.com | The following text is exclusive to this site. 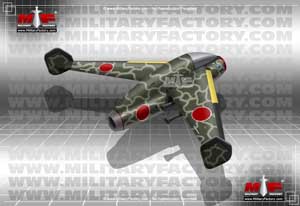 Aircraft propulsion by way of the "ramjet" had been on the minds of aeronautical engineers for some time leading up to World War 2 (1939-1945). Its history lay in the years surrounding World War 1 (1914-1918) but the concept was too advanced for the materials of the time. The arrangement essentially called for the engine to use its forward motion to compress incoming air and produce the needed forward thrust (in this way it would not depend on an axial compressor arrangement to pressurize gasses). One of the inherent restrictions of the powerplant was its inability to produce thrust at zero airspeed - thus negating its value during the take-off phase and requiring use of a supporting thrust package, such as that offered by rocket motors.

Prior to World War 2, scientist around the world were delving into the prospect of ramjet-powered flight and its mysteries did not evade the interest of Japanese engineers. During 1937, teams were formed to explore the concept further with the intent of producing a viable, low-cost aircraft for military service. This work spanned into the war years and the need for such an aircraft only grew once American bombers began appearing over Japanese cities with some regularity.

The Kayaba Katsuodori was the result of this endeavor, a single-seat, ramjet-powered interceptor-minded platform which utilized a short, tailless fuselage configuration with swept-back wing mainplanes. The cockpit would be held well-forward and offered exceptional vision for the pilot. The mid-mounted mainplanes were affixed ahead of midships with each tip capped by small vertical stabilizers. The ramjet propulsion system was buried within the tubular fuselage and a rocket-assist scheme (consisting of four externally-held rocket pods) was to be used. The rocket pods were installed under the wing roots and jettisoned once their usefulness had run out. Having achieved the required speeds, the aircraft would then continue on under ramjet power with a flying window of about 30 minutes being estimated. To aspirate the ramjet, the nose section featured an intake. No conventional undercarriage was to be fitted, instead the aircraft would glide back home powerless and land on a belly-mounted skid. The ramjet under consideration for the project became the Kayaba Model 1 which promised 1,655lb thrust output.

Since the aircraft never achieved prototype form, performance specifications were estimated and this included a maximum speed of 560 miles per hour with a rate-of-climb around 11,000 feet-per-minute. The latter would prove a good quality to have in interception sorties. The service ceiling was listed at 49,215 feet. Dimensions were an overall length of 14.7 feet, a wingspan of 29.5 feet and a height of 6 feet. Empty weight was 1,875 lb with a listed loaded weight of 6,615 lb.

As an interceptor attempting to tackle very large, slow-moving (but well-defended) targets, it was seen to arm the jet appropriately through 2 x 30mm Ho-301 series cannons - this was a suitable arrangement to counter even the high-flying and technologically advanced Boeing B-29 "Superfortress" which had made its presence known since mid-1944. The cannons would have been embedded in the sides of the nose.

Design work on the Katsuodori progressed into 1943 and plans were underway to begin construction of a working prototype for the following year. However, Japan's fortunes in the war had worsened into 1944 and the attention of authorities turned to more viable military weapons such as the Rikugun Ki-202 "Sharp Sword", a rocket-powered interceptor based on the German wartime Messerschmitt Me 163 "Komet".

This spelled the end of the line for the little ramjet-powered interceptor.©MilitaryFactory.com
Note: The above text is EXCLUSIVE to the site www.MilitaryFactory.com. It is the product of many hours of research and work made possible with the help of contributors, veterans, insiders, and topic specialists. If you happen upon this text anywhere else on the internet or in print, please let us know at MilitaryFactory AT gmail DOT com so that we may take appropriate action against the offender / offending site and continue to protect this original work.
Advertisements

(Showcased performance specifications pertain to the base Kayaba Katsuodori production variant. Performance specifications showcased above are subject to environmental factors as well as aircraft configuration. Estimates are made when Real Data not available. Compare this aircraft entry against any other in our database or View aircraft by powerplant type)
PROPOSED:
2 x 30mm Ho-301 cannons in nose 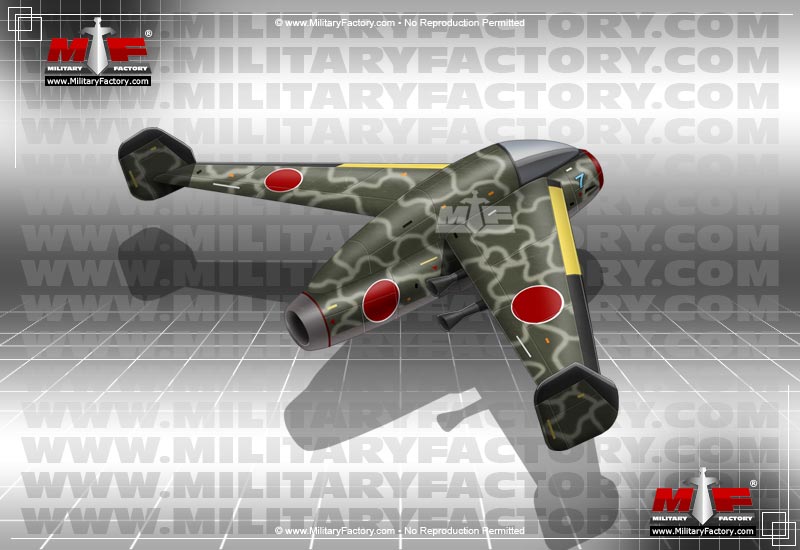