The Heinkel P.1078B project made up the second of three P.1078 jet-powered fighter projects for the Heinkel concern during World War 2.

Authored By: Staff Writer | Last Edited: 09/14/2017 | Content ©www.MilitaryFactory.com | The following text is exclusive to this site. 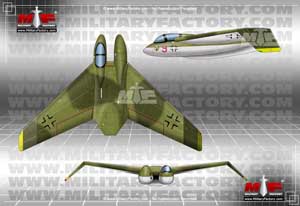 The various fighter programs of wartime Germany in World War 2 produced a bevy of fantastical design initiatives. Heinkel developed a line of jet-powered fighters following the P.1078 project designation beginning with the P.1078A, a rather conventionally-arranged development featuring swept-back wings cranked upwards near the wingtips, a nose-mounted intake for aspirating the single jet engine and seating for one a lightly-framed canopy offering good vision. The tail was of a traditional design sporting a single rudder fin and low-set tailplanes. A tricycle undercarriage was fully retractable and powered.

The evolution of the P.1078A became the asymmetrical P.1078B, a tailless concept interceptor utilizing the same 40-degree wing sweep, single engine installation, powered undercarriage and single-seat cockpit. However, this design proved a vast departure from the preceding offering in that it lacked a tail component meaning that no vertical or horizontal tailplanes were fitted. Additionally, the fuselage incorporated a dual-gondola arrangement in which the cockpit was set to a portside gondola protruding from the forward fuselage and a armament (with radar emplacement) was set to a starboard side gondola. This arrangement allowed for a shorter fuselage length to be used. The jet engine would be aspirated through an intake opening located between the two gondolas at the front of the fuselage. One other design feature of note was the nose leg landing gear was situated under the starboard side gondola. Power was to be served through an HeS 011 series turbojet engine while armament was to be 2 x 30mm MK 108 cannons. Onboard radar would have allowed the P.1078B to function as a night fighter. Projected performance included a maximum speed of 1,025 kmh (637 mph).
Advertisements

At the outset of P.1078B design, the aircraft was intended as an all-wing aircraft to incorporate the smallest possible fuselage available. The fuselage would be used to house the powerplant, cockpit, avionics and armament. The large surface area also improved internal space for fuel stores. Heinkel engineers presented the concept to Ernst Heinkel himself though it was greeted with mixed opinion. Some qualities, such as the cranked wings, proved worthy of follow up research while other qualities, such as the twin-nose layout, proved rather limiting for a fighter pilot trusting his eyes more than anything (the starboard side gondola would have obscured the right side view from the cockpit).

As such, the P.1078B only ever evolved in paper form and was never made ready for prime time testing nor production. The P.1078 line appeared in one more iteration as the P.1078C fighter form - another tailless interceptor design with a stout fuselage, single engine installation and swept-back wings with revised bend. The end of the war in Europe in May of 1945 signaled the end of all development of the P.1078 projects.
Advertisements

(Showcased performance specifications pertain to the base Heinkel He P.1078B production variant. Compare this aircraft entry against any other in our database or View aircraft by powerplant type)
PROPOSED:
2 x 30mm MK 108 cannons in starboard side gondola front. 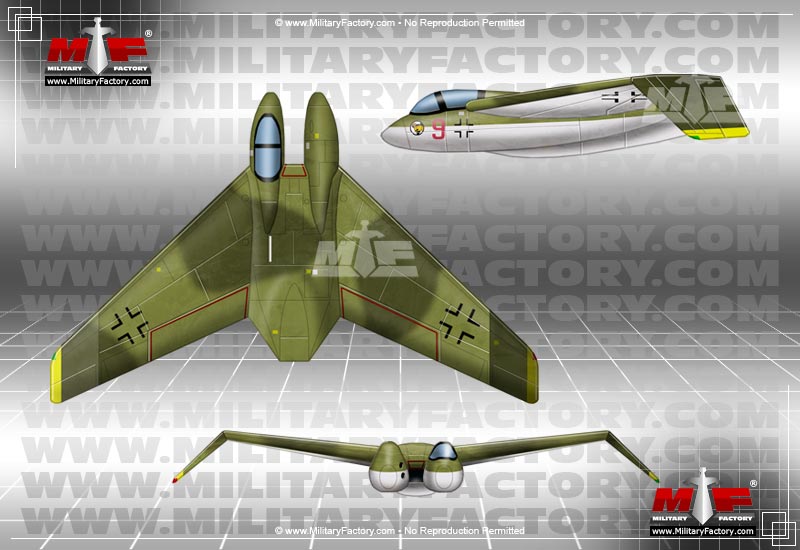