The Sikorsky S-97 Raider, based on the impressive X-2 Technology Demonstrator, is in contention for the US Army Armed Aerial Scout helicopter program.

Authored By: Staff Writer | Last Edited: 08/28/2020 | Content ©www.MilitaryFactory.com | The following text is exclusive to this site. 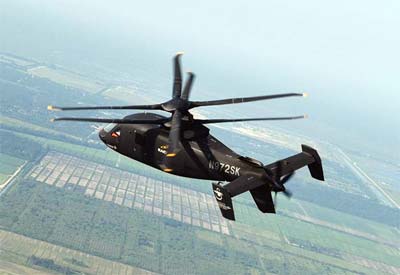 While helicopters have evolved since their mainstream inception in the 1950s, the "rotorcraft" has remained largely conventional and true to its roots. With the advent of the US Army's Armed Aerial Scout (AAS) program - intended to replace venerable Bell OH-58 Kiowa series - Sikorsky has responded with its S-97 "Raider" compound rotor concept. The S-97 incorporates a coaxial main rotor configuration, each mounting four blade assemblies, as well as a six-bladed "pusher" propeller in the tail to achieve stated program goals. The Sikorsky S-97 development is based on its award-winning "X-2" technology demonstrator and, in a militarized form, will be capable of strike, troop transport and fast reconnaissance sorties on the modern battlefield. The Sikorsky product includes a bevy of industry names including Northrop Grumman, BAe Systems, Honeywell, Garmin, Goodrich, Esterline, Kamatics, Hamilton Sundstrand and Ametek among others.

The US Army revealed its AAS program in March of 2010 to which Sikorsky reacted with their S-97 program in October. Prior to the announcement, Sikorsky garnered a great deal of data from its one-off, two-seat X-2 prototype serving as a technology demonstrator and powered by a single LHTEC T800-LHT-801 series turboshaft engine of 1,300shp to 1,800shp output. First flight of the type was recorded on August 27th, 2008 with evaluations running until July 14th, 2011 to which the aircraft has since been retired from operation. The X-2 concept proved high-speed coaxial rotor flight as a sound viable propulsion method for helicopters and recorded a maximum speed of 299 miles per hour (an unofficial record for a compound helicopter) with cruise speeds at 288mph (250 knots) while sporting an efficient operational range of 808 miles on internal fuel stores. On May 4th, 2009, a Light Tactical Helicopter mock-up was showcased based on the X-2 technology.

As it stands today (2013), the S-97 prototype design incorporates the General Electric T700 turboshaft engine which would eventually be replaced by a more potent offering from the "Improved Turbine engine Program" (ITEP) in time, promising better performance and higher output. As in the X-2 before it, the Raider will utilized a twin main rotor system each fielding four composite blades and coupled to a split-torque transmission system. The powerplant will also drive a six-bladed propeller assembly (arranged in a "pusher" configuration) at the rear of the design for the high-speed flight requirement. Composites will also be utilized throughout the construction of the fuselage as a weight savings measure. The undercarriage will be wholly retractable for a more "stealthy" in-flight profile. The empennage will sport a pair of outward cranked vertical tail fins emanating from short horizontal planes as well as a centralized ventral rudder ahead of the trailing propeller. Tracking and targeting systems will be mounted to a chin fairing and the cockpit will sport digital fly-by-wire controls for precision handling and force-feedback with much of the available functionality being installed directly to the primary flight stick. Autonomous flight will be built into the design while a standard operating crew of two pilots (seated side-by-side) will be normal. A midships cabin will be featured aft of the cockpit and showcase seating for six combat infantry. Entry/exit of the cabin will be by a rectangular sliding doors fitted one to each fuselage side. The pilots will enter/exit through hinged automobile-style doors and sit behind wide-angle canopy glass.

Overall dimensions of the S-97 prototype include a running length of 35 feet and a rotor diameter of 33 feet. This compact footprint will allow up to four Raiders to be transported to war theaters in the belly of a Lockheed C-17. Gross weight is 8,950lb with a maximum take-off weight of 11,400lb.

Performance estimates include a cruise speed of 253mph (220 knots) with an operational range of 354 miles (mission endurance time of 2 hours and 40 minutes on internal fuel). The aircraft's service ceiling will be approximately 10,000 feet. Due to the unique design nature of the Raider, the Sikorsky product expects to improve upon maximum speeds, mission endurance times, hover altitude, payload capabilities, acoustic detection levels and turning radius qualities of conventional rotary-wing aircraft.

As of this writing (May 2013), Sikorsky will deliver two S-97 prototypes which began construction in late 2012. First flight is projected for sometime in 2014.

In many respects, the Sikorsky S-97 product - should it come to fruition - will combine the key qualities of several helicopter systems of note: the abandoned 1970s-era Lockheed AH-65 "Cheyenne" attack helicopter (which utilized a pusher propeller to reach high speeds), the cancelled composite-heavy Sikorsky RAH-66 "Comanche" light attack "stealth" helicopter, the Russian Kamov Ka-50 "Black Shark" attack helicopter (with its coaxial main rotors), the Soviet/Russian Mil Mi-24 "Hind" (with its inherent troop carrying capability) and the relatively compact footprint and agile handling of the Bell OH-58 "Kiowa" light helicopter. For comparison, the listed maximum speed for the Kamov Ka-50 is 196 miles per hour while the Lockheed AH-65 Cheyenne managed 244 miles per hour (225mph cruise) during testing.©MilitaryFactory.com
Note: The above text is EXCLUSIVE to the site www.MilitaryFactory.com. It is the product of many hours of research and work made possible with the help of contributors, veterans, insiders, and topic specialists. If you happen upon this text anywhere else on the internet or in print, please let us know at MilitaryFactory AT gmail DOT com so that we may take appropriate action against the offender / offending site and continue to protect this original work.

September 2013 - Aurora Flight Sciences, who was charged with manufacturing the two composite fuselages for testing, delivered the units to Sikorsky.

August 2017 - It was revealed that, in early August, one of the two Raider prototypes suffered damage from a hard landing.

August 2017 - Sikorsky has begun construction of a second flyable prototype for the Raider program.

April 2018 - The second S-97 prototype began its ground-testing phase. A first-flight is scheduled for June 2018. The second unit replaces the first in the program, which reached 150 knots in testing.

May 2018 - The S-97 has completed ground-testing with a first-flight scheduled for June 2018. This will be a return-to-the-air for the series which has been delayed by the August 2017 hard landing incident.

June 2018 - The S-97 Raider prototype returned to the air on June 19th for the first time since its August hard landing.

July 2020 - The S-97 has flown, for the first time, alongside (in formation) the SB-1 Defiant at Sikorsky's West Palm Beach facility for U.S. Army authorities.

(Showcased performance specifications pertain to the base Sikorsky S-97 Raider production variant. Performance specifications showcased above are subject to environmental factors as well as aircraft configuration. Estimates are made when Real Data not available. Compare this aircraft entry against any other in our database or View aircraft by powerplant type)
PROPOSED (on external fuselage wingstubs):

General Assessment
Firepower
Performance
Survivability
Versatility
Impact
Values are derrived from a variety of categories related to the design, overall function, and historical influence of this aircraft in aviation history.
Overall Rating
The overall rating takes into account over 60 individual factors related to this aircraft entry.
68
Rating is out of a possible 100 points.
Relative Maximum Speed
Hi: 300mph
Lo: 150mph
This entry's maximum listed speed (253mph). 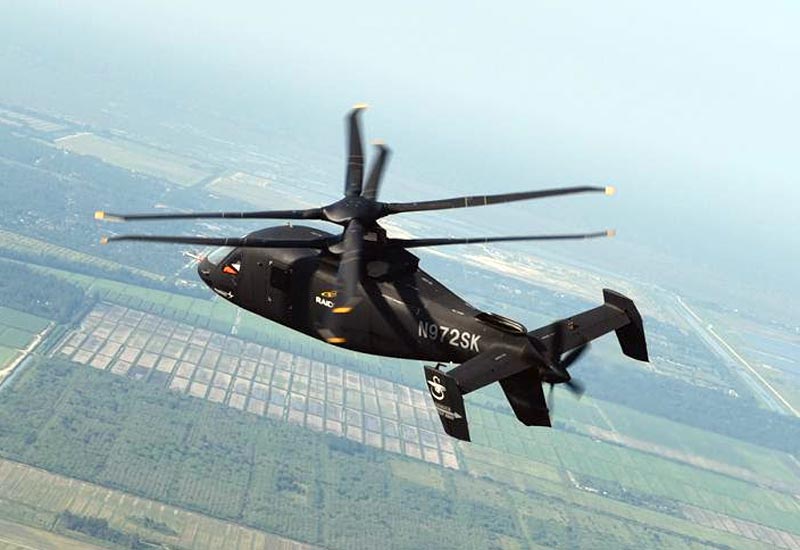 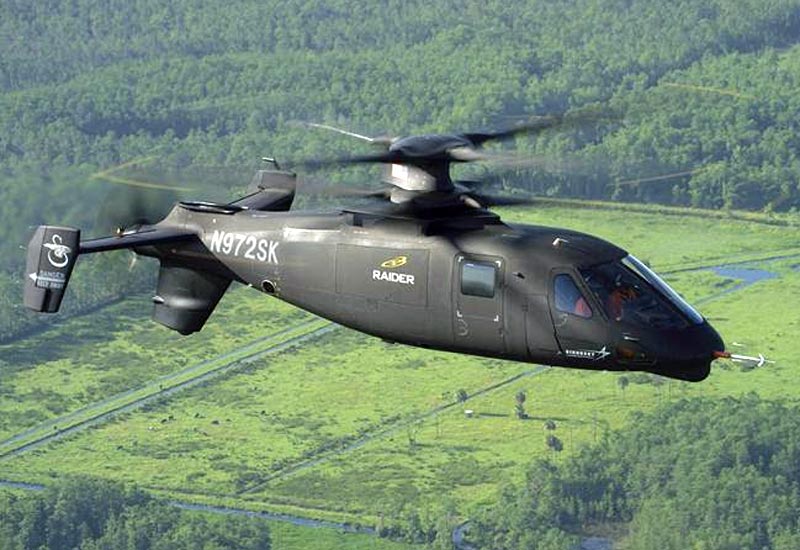 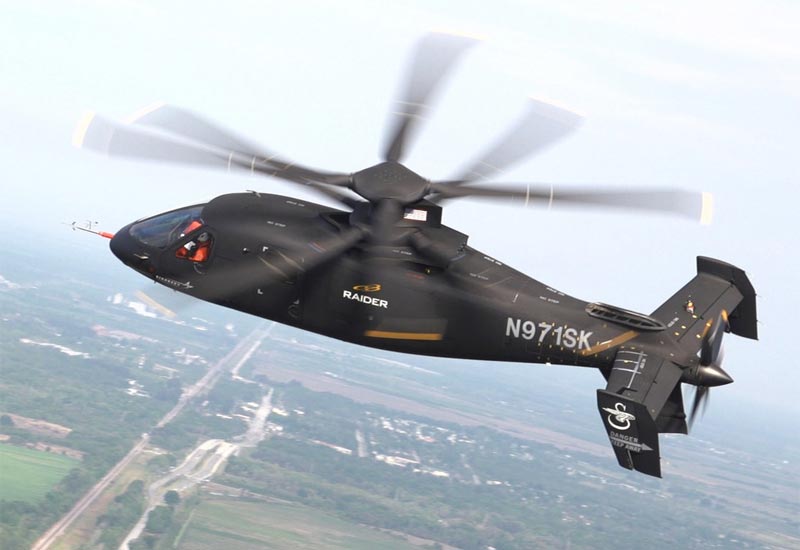 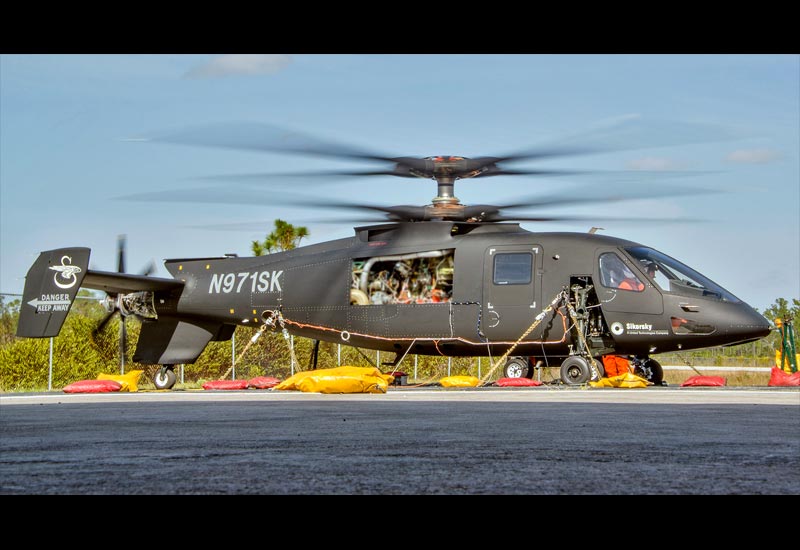 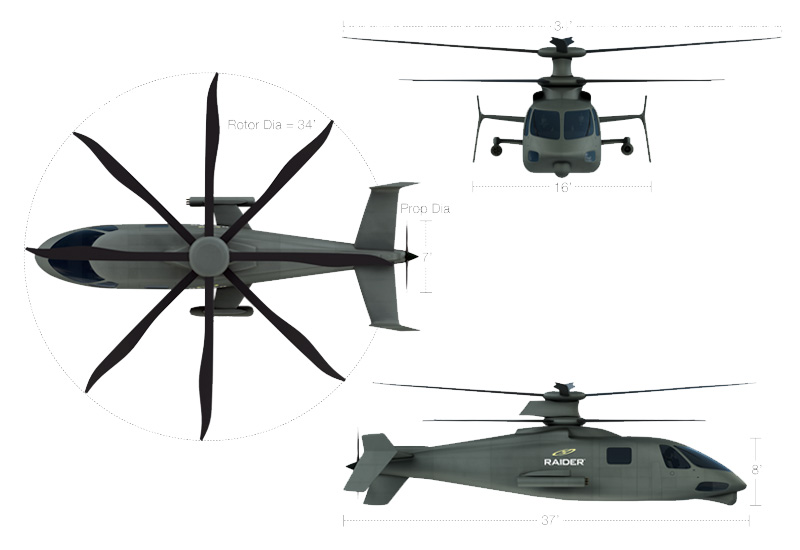