The German Heinkel He 162 was of an advanced, single-seat, single jet engine design of World War 2 - it appeared in limited numbers towards the end of the conflict.

Authored By: Staff Writer | Last Edited: 06/24/2019 | Content ©www.MilitaryFactory.com | The following text is exclusive to this site. 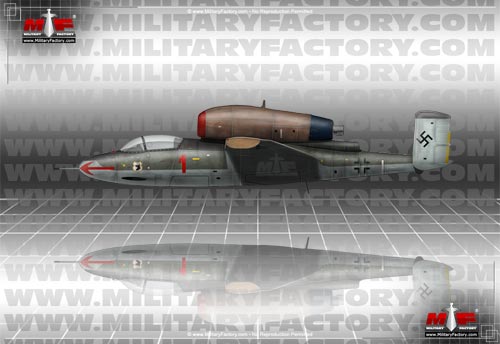 The Heinkel He 162 "Volksjager" (the "People's Fighter") was a hasty solution to the German problem of the Allied bombing campaign. The campaign was spearheaded by daylight bombing raids led by the Americans and nighttime incursions led by the British. Into 1944, the campaign had wreaked major havoc on German infrastructure, war production, and worked to demoralized a once-stout fighting nation. It was realized that a counter to these massed formations of heavy bombers, that also included pesky escort fighters, was desperately needed - one that went beyond the capabilities of the limited Messerschmitt Me 163 "Komet" rocket-powered interceptor and the complex and expensive Messerschmitt Me 262 "Schwalbe" jet-powered fighter.

With this in mind, the German Air Ministry finalized specifications for a new single-seat fighter-interceptor on September 8th, 1944. The requirement called for a new, economically-minded, lightweight fighter form that could be mass-produced in short order and use as few war materials as possible. In addition to this, the aircraft would not exceed 4,410lb, require very little maintenance, and very limited training. It was theorized that, with this new fighter, the Luftwaffe could simply overwhelm the Allied bomber formations, either drawing off the fighter escorts to leave the bombers to face ground-based fire or prop-driven interceptors or tackle the bomber combat "boxes" directly. Performance would have to meet or exceed that as offered by the definitive forms of the great Allied fighters, namely the North American P-51 Mustang and the Supermarine Spitfire.

Six of the usual German wartime defense players were notified of the requirement, the list including Arado, Blohm & Voss, Focke-Wulf, Junkers, Heinkel, Horten, and Messerschmitt. The Air Ministry laid down a tight schedule, hoping to have the aircraft ready before the end of 1944 and ready to enter serial production as soon as early-January 1945. Authorities put further pressure on the project to deliver up to 4,000 aircraft per month on a very optimistic manufacturing schedule.

On September 15th, 1944, two designs were selected from the submitted batch, the P.211 belonging to Blohm & Voss and the P.1073 belonging to Heinkel. Between the two, the Heinkel submission also included a mockup which helped to seal the deal and provide the basic framework of what would become the He 162. The He 162 was known to Heinkel engineers as the "Spatz", or "Sparrow", while the project was recognized by the Air Ministry as the "Volksjager" - "People's Fighter". Still others knew the aircraft by the project's codename of "Salamander".

This particular Heinkel entry ended up becoming one of the more unique of the jet-powered design forms to emerge from Germany during the last months of the war. It seated its single pilot under a largely-unobstructed, two-piece canopy near the nose and twin autocannons were buried under the frontal section of the fuselage. The fuselage was elegantly shaped for ultimate streamlining, housing all pertinent operating systems such as the cockpit, avionics, and fuel stores. The wing mainplane members were relatively short span-wise and mounted at the shoulder while be positioned near midships. The tail unit, one of the more unique design qualities of the He 162, involved a pair of rudders straddling upward-cranked horizontal planes.

Splitting the fins was the single turbojet housing which was, rather interestingly, fitted over the fuselage as opposed to under it, under the wings, or buried within the fuselage proper. In this way, the engine could be cleanly aspirated from its front-mounted intake and exhausted through its unobstructed rear port, the jet wash made to pass over the split tail arrangement without issue. This also simplified any ductwork from intake to exhaust considerably. The engine-of-choice became the BMW 003E series turbojet which promised an output of around 1,765lb thrust.

To complete this fighter, Heinkel engineers elected for a wholly-retractable tricycle undercarriage for ground-running and all three wheeled members would retract nicely into the fuselage.

Beyond the physical features and inherent capabilities of the lay the other part of the He 162 equation: qualified fighter pilots. By this time in the war veteran Luftwaffe pilots were in short supply due to losses and general wartime fatigue. It was therefore decided to man the new, somewhat disposable, fighter with airmen pulled from the "Hitler Youth". Training would be a short period of intense preparation though sometimes actual combat sorties would make up the lack of classroom experience. This also required making an aircraft that was relatively easy to fly meaning simple controls and a clean instrument panel. To aid in the survivability of the pilot, the He 162 was given a crude form of ejection seat, becoming one of the first military aircraft to offer this potentially life-saving feature.

A first-flight of an He 162 prototype was recorded on December 6th, 1944 and service introduction followed as soon as January 1945 - such was the desperate war situation for Germany. In service, the aircraft proved a handful to fly, even for seasoned pilots, and resulted in deaths both during the testing period as well as during actual service. The airframe was, however, noted as quite rugged and designed to be able to withstand excessive forces of a dive. The dorsally-mounted engine installation was found to not play well with the shoulder-mounted wings, adding unnecessary turbulence in flight particularly at higher speeds.
Advertisements

The first operational test squadron was formed by the Luftwaffe as soon as January 1945 and this was followed by the first operational combat squadron brought online that February. March was used to perfect training (this done under the constant threat of daily Allied attacks from the air) and the first combat sorties of the He 162 were finally had in April 1944. In-the-field results were mixed: the He 162 held the performance figures to run down any Allied aircraft of the period but were highly susceptible to being shot down on landing approaches. Additionally, structural deficiencies and engine issues were common enough to ensure more He 162s were lost to non-combat causes than those shot down.

The impact of the He 162 was further limited by its late arrival into World War 2 and, as such, the He 162 was never truly able to meet its full potential nor could engineers enact any major changes to rectify its short comings. Eventually, the Soviets closing in from the East and the Allies arriving from the West meant that the completed and incomplete stocks of He 162 all fell into enemy hands. These were then thoroughly evaluated, with great interest, during the immediate post-war years though the design was given up for good rather quickly - ending its days as museum pieces for most.

Total production of the He 162 reached about 320 units (sources vary on the exact numbers) before the end of the war. Of this total, between 120 and 200 examples were actually deemed operational with a further 600 to 800 airframes having reached various stages of production.

During the course of its short life, the He 162 appeared in several realized, and many proposed, forms. The line began with the original ten pre-production models (He 162A) under the He 162 A-0 designation. Then came the A-1 models with their 2 x 30mm MK 108 cannon arrangement (the guns limited to 50 projectiles each) and the A-2 armed through the more definitive arrangement of 2 x 20mm MG 151/20 autocannons (120 rounds per gun). A models performed at near 490 miles-per-hour and ranged out to 605 miles while reaching a ceiling of 39,000 feet.

The A-3 variant was a proposed He 162 with new, strengthened nose assembly fitting 2 x 30mm MK 108 autocannons. The A-8 was another proposed form powered by a Jumo 004D-4 turbojet engine of 2,300lb thrust set to increase operating speeds to nearly 550 mph. The A-10 was a proposed He 162 dispensing with the turbojet altogether and mounting twin Argus As 014 pulse jet engines instead, these seated over the tail.

The B-1 was to take on the Heinkel HeS 011A turbojet set atop a lengthened fuselage - this would have solved the issue of range, as more internal fuel stores would be fitted, and controlling. The He 162C would have the same changes as the proposed B-1 with the added benefits of a swept-back, "gull-wing" style mainplane configuration to go along with a new "V-style" tailplane. 2 x 30mm autocannons were to make up this variants armament suite, the guns carried in oblique (upward-angled) installations to better engage the more vulnerable undersides of enemy bombers. The He 162D was similar in scope but its mainplanes completely swept forward for a very futuristic appearance (with the hope that handling could be improved). The He 162E was flight-tested with the "BMW 003R", the engine being a mating of the BMW 718 rocket engine with the BMW 003A turbojet engine. The He 162S became a twin-seat glider form used exclusively in training.

The Tachikawa Ki 162 was the last notable proposed form to come the He 162 line, this aircraft a locally-built Japanese interpretation of the German He 162. The aircraft was to be powered by a Lorin ramjet engine alongside an Argus pulsejet for maximum power - though little came of this proposal before war's end.
Advertisements

(Showcased performance specifications pertain to the base Heinkel He 162 Volksjager (Peoples Fighter) production variant. Compare this aircraft entry against any other in our database or View aircraft by powerplant type)
STANDARD:
2 x 20mm MG 151 automatic cannons OR 2 x 30mm MK 108 automatic cannons under the nose. 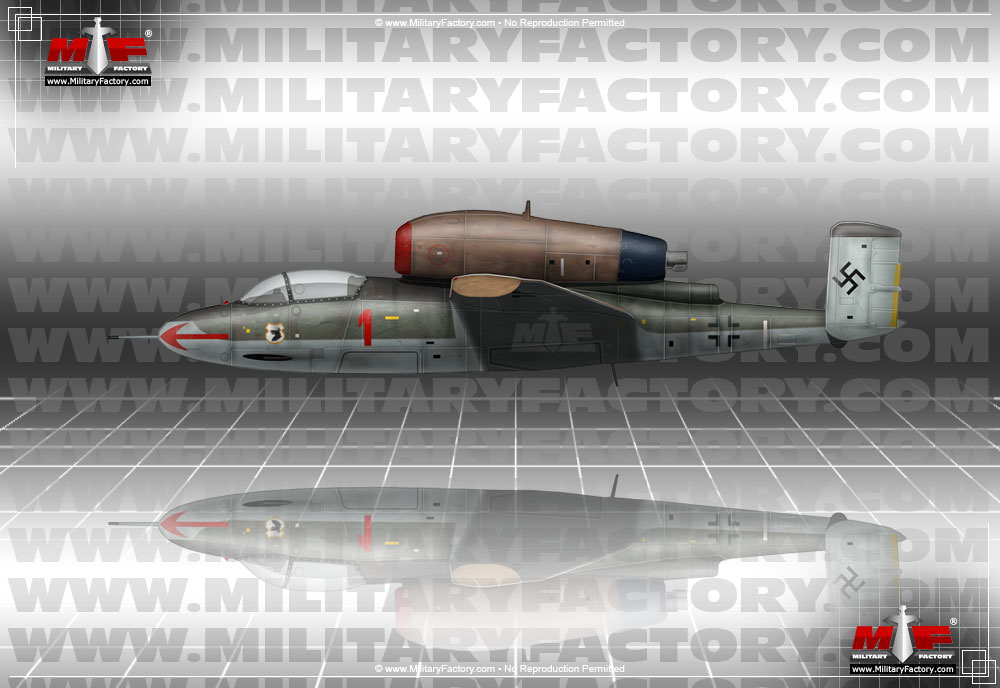 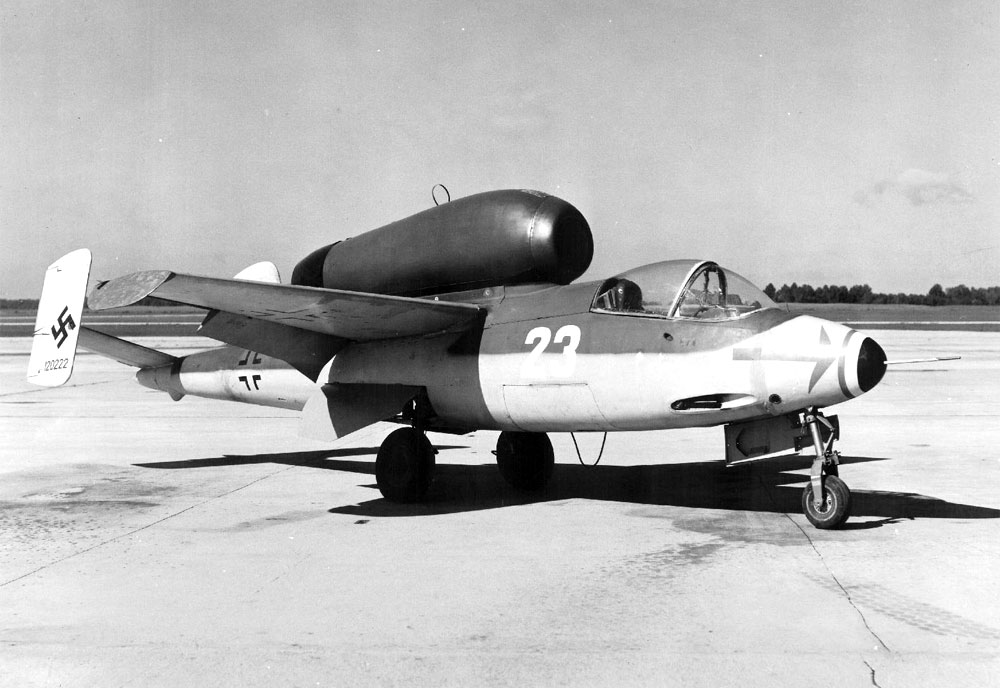 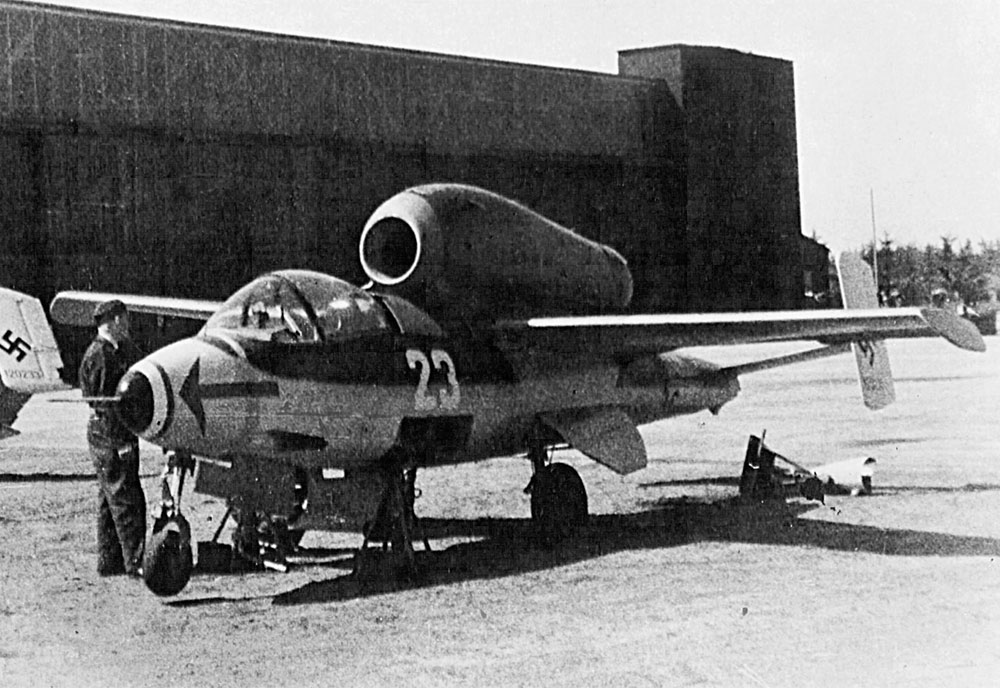