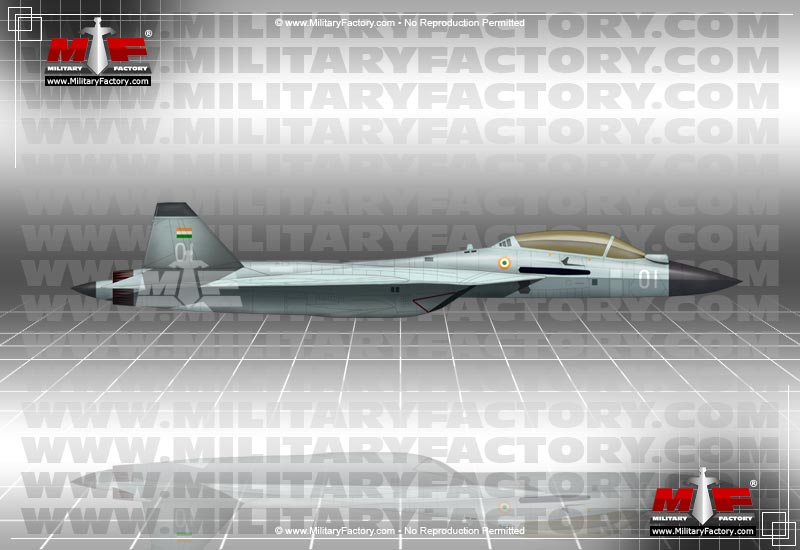 Authored By: Staff Writer | Last Edited: 02/13/2020 | Content ©www.MilitaryFactory.com | The following text is exclusive to this site.
In December of 2010, it was announced that a partnership deal had been reached between the governments of India and Russia on development of an indigenous 5th Generation Fighter to be based on the currently in-development Russian Sukhoi PAK-FA T-50 prototype. Hindustan Aeronautics Ltd (HAL) of India would be partnering with the Sukhoi concern to develop and Indian-centric version of the advanced stealth fighter for use by the Indian Air Force, replacing its existing fleet of Mikoyan MiG-29 Fulcrum and Sukhoi Su-30MKI ("Flanker-H") air superiority fighters - both aircraft with origins in Cold War, 1970s requirements. The $11 billion dollar deal will net the Indian Air Force an advanced all-modern fighter with introduction of the series tentatively expected for 2022. To date, the governments are scheduled to sign the deal which will provide India a working prototype to be delivered in 2014 with a follow-up prototype expected in 2017. A third would be joining these two in 2019 and all would serve as evaluation mounts to test various components, onboard systems and general handling and weapons delivery.

The Indian project was initially designated as the "Fifth Generation Fighter Aircraft" (FGFA) and is now (as of August 2012) known under the name of "Perspective Multi-Role Fighter" (PMF). It is no secret that the Russians have fallen behind in the Indian military procurement race and its commitment to deliver its advanced PAK FA fighter is a sign of increased desire for inclusion. As such, India plans on procuring 250 PAK FA (single-seat) and PAK FA derivative (two-seat) to which Sukhoi will benefit greatly - the PAK FAs will arrive initially but be outfitted with Indian software and electronics and support Indian weaponry. The Indian Air Force recently signed to procure the French Dassault Rafale in number (to replace its fleet of outgoing MiG-21s) for the interim while it also maintains its fleet of MiG-29 and Su-30 aircraft. The joint PAK FA/PMF endeavor is similar in scope to the Su-30M/Su-30MKI initiative - the Su-30M being the standardized Russian Flanker while the Su-30MKI is the Indian-based derivative with local modifications led by HAL.

Like its T-50 counterpart, the Indian PMF will sport inherent "stealth" features without the heavy use of sloped angles (more in line with the Lockheed F-22 Raptor than the Lockheed F-117 Nighthawk). It will feature the capability to "supercruise" which will allow the airframe supersonic flight without the need of fuel-hungry afterburner to be deployed. The PMF will also be all-modern with advanced fly-by-wire avionics, and all-digital cockpit, advanced weapons identification, tracking and delivery and Active Electronically Scanned Array (AESA) radar facilities - the latter to be housed in the nose. This will provide the PMF the ability to avoid enemy radar and homing missiles while being able to deliver advanced payloads of air-to-air missiles, air-to-surface missiles, anti-radiation missiles, anti-ship missiles and precision-guided munitions as needed. Composites will be used where possible to keep operational weights in check and eight of the sixteen proposed weapons hardpoints will be held internally to help reduce the aircraft's overall radar signature. Engines are expected to be comparable to the Saturn-Lyulka AL-41F turbofan series capable of afterburn with and output of over 34,000lbs thrust each and three Russian concerns are vying for the finalized powerplant rights. Like other 4.5 and 5th Generation Fighter mounts, the PMF will make use of "networking" between its aircraft fleet via secured data links. The two seat variant will sport a second cockpit in tandem at the expense of internal volume (and thus fuel stores and operational range); the second pilot will take a portion of the workload from the primary pilot, making for a more efficient weapons delivery system. Weapons of the PMF are expected to be largely Indian in nature which will lower the reliance on foreign procurement and increased logistical friendliness within the Indian Air Force circle. By and large, the Indian variant will largely resemble the Russian design externally but be of wholly-Indian design internally concerning its electronics, avionics and weapons suite.

Due to the on-going nature of the PMF program, specifications on this page are likely to change (numbers listed in this article are largely based on the existing PAK FA T-50 prototype).

November 2012 - The Indian government has since reduced the number of intended FGFA aircraft it plans to procure. Single-seat versions will now number 166 examples with 48 examples of the two-seat version. The Russian PAK FA remains in flight testing as of this writing (Early November 2012).

(Showcased performance specifications pertain to the base HAL Sukhoi PMF/FGFA production variant. Compare this aircraft entry against any other in our database. View aircraft by powerplant type)
(Proposed)

(Not all ordnance types may be represented in the showcase above)
Hardpoint Mountings: 16