A gun is made up of many parts, both internal and external, that have been refined over many decades of use. 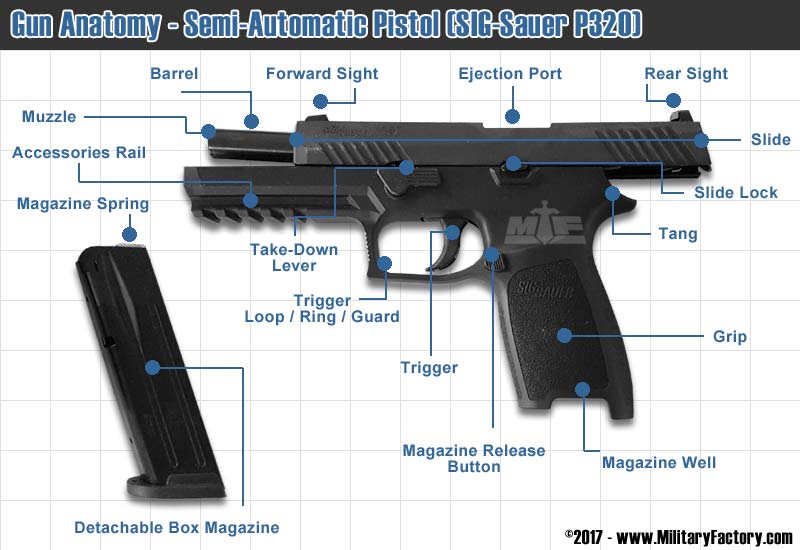 Barrel - The barrel is business end of any firearm. it is typically made of heavy-duty material to take on the abuse of imparted on the assembly by the forces involved. Barrels also are rifled along their internal wall to impart a rotation onto the exiting projectile - thus providing inherent stability and therefore aiding in accuracy.

Forward Sight - The forward sight is a forward protrusion that normally is used to align the forward section of the weapon with the rear and its rear sighting device. This also aids accuracy, allowing the shooter to manage well-placed shots.

Ejection Port - The ejection port is a port used to extract a spent or misfed/misfired shell casing or complete cartridge. It is a cutout along the middle portion of the slide and can also be used to check the condition of the firing chamber (i.e. to see if the chamber contains a live round or to clear a misfeed/misfire).

Slide - The slide is the complete assembly that houses the upper section of the weapon. This assembly is of metal to withstand the harsh forces at play when the gun is fired. The slide usually contains a ribbed pattern for gripping and is pulled back manually to load the gun. In subsequent shots, the slide is automatically recoiled and is part of the mechanism used to introduce a fresh cartridge from the magazine into the firing chamber.

Slide Lock - The slide lock is a simple locking device used to lock the slide in the rearward position. This can be done manually by the operator to ensure the chamber is empty or to expose the chamber to help clear a misfeed/misfire. Upon firing the final cartridge in the magazine, a semi-automatic weapon will engage its slide lock to let the user know the weapon/magazine is now empty of all available ammunition.

Tang - The tang is a protrusion that sits over the webbing of the firer's shooting hand. This structure assists the operator in managing the recoil of the weapon and also protects the hand from the slide assembly as it quickly moved rearwards and then forwards during the firing action.

Grip - The grip is used by the operator's dominant hand (shooting hand) for holding the handgun. A typical hold involves both hands, one wrapped around the grip and the other around both the grip and dominant hand.

Magazine Well - The magazine well is the well that accepts the magazine. It usually features smooth walls and grooves to direct the magazine up towards the firing mechanism and slide.

Magazine Release Button - The magazine release is used to eject the magazine from the grip of the handgun.

Trigger - The trigger is the lever used to manage the firing function of the weapon. Many modern guns rely on a Double-Action trigger meaning the simple act of pulling the trigger causes the hammer/striker to be cocked and released in one action.

Trigger Guard - The trigger guard is a fixed ring set around the exposed parts of a trigger lever. This only partially protects the firearm from discharging accidentally when kept/drawn in/from a holster.

Take-Down Lever - This lever is used to manage the field-stripping of the weapon. Field-stripping breaks the weapon down into several major components for cleaning and/or repair.

Detachable Box Magazine - The magazine is the housing used to hold cartridges. Cartridges are either single- or double-stacked depending on the magazine used and are spring loaded to assist in bringing the next available cartridge up to the firing chamber.

Accessories Rail - The accessories rail is used to mount any supported tactical accessory by the user. For handguns this typically involves laser aimers or flashlights.

Muzzle - The muzzle is the business end of the barrel assembly, the last part of a gun that the exiting bullet touches. Some barrels come threaded to accept a silencer or suppressor. Many gun models are marketed in different barrel lengths which also mean that the frame and slide of the gun must be lengthened to match.