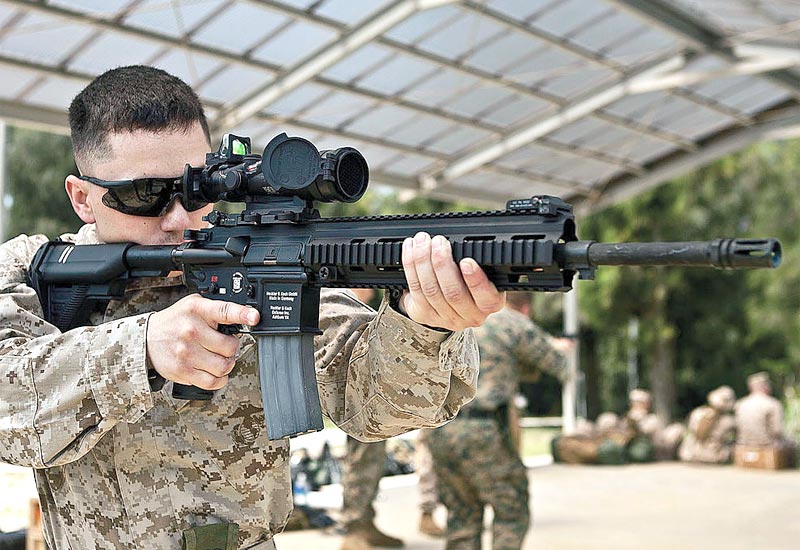 The Heckler and Koch M27 Infantry Automatic Rifle is based upon the in-service HK 416 series gun and may succeed the M249 LMG line in USMC service.

Authored By: Staff Writer | Last Edited: 12/28/2018 | Content ©www.MilitaryFactory.com | The following text is exclusive to this site.
Adopted by the U.S. Army and used by many other ground warfare forces of the world, the AR-15-based HK416 model automatic rifle from Heckler & Koch of Germany also forms the basis of the new United States Marine Corp's (USMC) M27 "Infantry Automatic Rifle" (IAR). The product was adopted in 2011 and has since seen frontline combat service in the Afghanistan Theater where it has been used to supplant some of the stock of the larger, heavier, belt-fed M249 SAW (Squad Automatic Weapon) / Light Machine Gun (LMGs). The M27 offers a lighter, handier form of automatic fire while chambered for the same 5.56x45mm NATO cartridge, feeding by way of a detachable box magazine. Several thousand examples of the M27 currently make up the USMC inventory.

Due to recent experiences in Iraq and Afghanistan, Marine infantry units have found a need for a lighter alternative to the clumsy, less accurate M249 system, particularly when doing combat in the tight confines of urban settings. A program was started in 2005 to find a weapon to fill the need for an intermediate-sized automatic weapon capable of feeding from a 100-round cartridge supply in 5.56x45mm NATO caliber. Eventually, the 100-round requirement was reduced to a standard 30-round detachable box magazine and several gun providers were contracted for testing samples. Eventually the German Heckler & Koch HK 416 was selected the winner in 2009 and the weapon was adopted into USMC service as the "M27" during 2010.

Initial in-the-field acceptance of the M27 over the trusted and proven M249 was slow as small numbers of the new gun began making their way into active combat zones. Because of the M27s select-fire capability, a feature lacking in M249s, the new weapon allowed variable fire rates as well as accuracy over range while featuring some commonality of parts with existing infantry-level weapons like the M16A4 assault rifle and M4 carbine guns (the M27 supports the base 30-round STANAG curved magazine box). Additionally, the functionality and versatility of the M27 allowed it to be used in the Designated Marksman Role (DMR), something not possible with the M249 which was largely a weapon used for suppression fire. Troops appreciated their new weapon's lighter load as well, particularly on long marches. To make up the difference in ammunition count between the belt-fed M249 and the magazine-fed M27, the magazine supply has been spread out about the members of the march, as many as twenty-two 30-round magazines equaling the typical ammunition load of the M249 section (about 600 total rounds).

As the HK 416 forms the foundation for the M27, its general design and functionality come along with it. This includes sections of Picatinny rail for installation of various tactical accessories including optics fits and grips. A short-stroke piston with rotating bolt is used in the gas-operated action. A free-floating barrel aids in accuracy over range. A foldable bipod can be used to support the front section of the rifle for when in the fire suppression role. Dimensions include an overall length of 37 inches with a barrel measuring 16.5 inches long. The adjustable stock can reduce the length to a more manageable 33 inches. Unloaded weight is 8 lb.

The internal make-up of the gun allows for a rate-of-fire of 700 to 850 rounds per minute to be achieved. Effective range is out to 550 meters at specific targets while general areas can be reached out to 3,600 meters. Sighting is typically through a standard 3.5x Squad Day Optic fit. A flip-up rear rotary diopter sight is coupled with a front post for traditional "iron" sighting, essentially acting as backup to the optics fit.

Due to the entrenched nature of the M249, the M27 is not an outright replacement for the storied light machine gun - at least not just yet - as troopers gain more experience in managing the newer, lighter automatic gun in the same role.

The M38 is a Designated Marksman (DM) form of the M27, under testing by the USMC. This model carries a 16.5" barrel and is chambered for the same 5.56mm cartridge used int he HK 416 series. Optics are different to suit to the DM role.

December 2017 - The M38 rifle has been identified with elements of the USMC's 3rd Battalion during training at Camp Lejeune (North Carolina).

December 2018 - The USMC will field initial-delivery M27 Infantry Automatic Rifles to active and reserve elements during 2019.