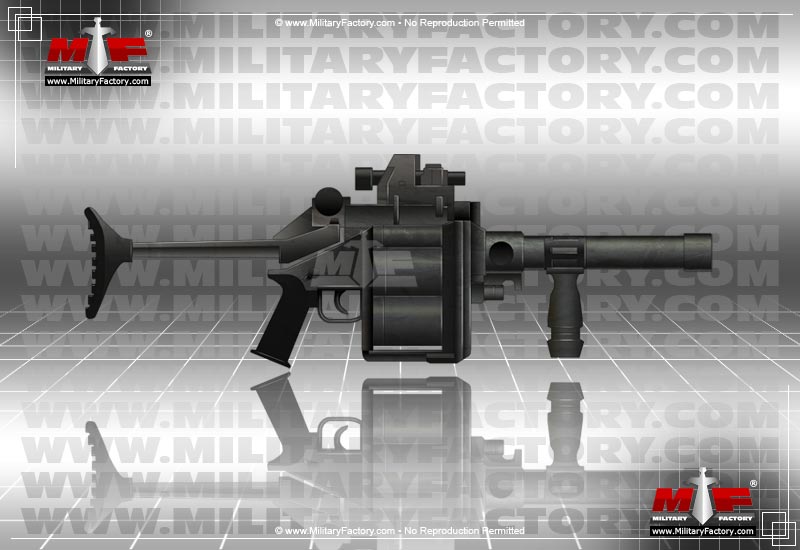 Authored By: Staff Writer | Last Edited: 07/08/2019 | Content ©www.MilitaryFactory.com | The following text is exclusive to this site.
The privately-owned firearms concern of Milkor Pty Ltd of South Africa has made a living on its line of excellent 40mm grenade launchers. Indeed, its Mr. Andries C. Piek is recognized as the "Faher" of the original Multiple Grenade Launcher (MGL), a line that began in the early 1980s and embodied by the MGL Y2. The MGL Y2 went on to be adopted by the army of South Africa (and others) and has since provided years of reliable service in-the-field under various rigors. While modernized in various forms such as the "SuperSix", theMGL Y2 remains the beginning of the line.

The MGL Y2 adopted an assault weapon-style arrangement utilizing an integrated pistol grip and adjustable shoulder stock support system. The magazine was akin to that of the classic Old West Colt firearms as it rotated along an axis, introducing each of the six chambers to the firing action. The barrel was affixed ahead of the design in the traditional way. The receiver allowed for optics to be mounted, broadening the tactical capabilities of the weapon (beyond the standard iron sights). It was cleared to fire various lethal and non-lethal 40mm grenade munitions and thusly was favored by groups beyond military types.

Dimensions of the system included an overall length of 30.6 inches, a barrel length of 11.8 inches and an empty weight of 11.68lbs. The action was of semi-automatic with use of the six-shot cylinder, allowing the operator to clear the cylinder within seconds if need be. Muzzle velocity was rated at 250 feet per second with a rate-of-fire of 90 rounds per minute listed.

The original production mark was the MGL Y2 of 1983. This was then followed by the Second Generation mark in the MGL Mk 1 of 1996.