The American M240 - based on the Belgian FN MAG - has proven a viable replacement for the long-running Vietnam-era M60 General Purpose Machine Gun.

Authored By: Staff Writer | Last Edited: 03/16/2022 | Content ©www.MilitaryFactory.com | The following text is exclusive to this site. 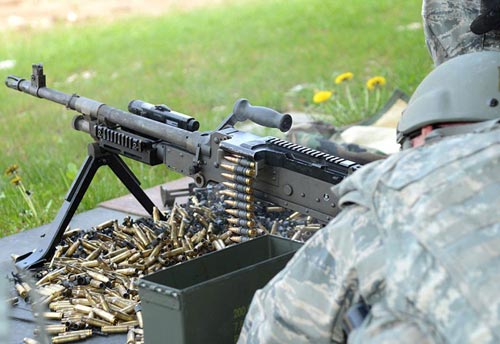 The M240 is the American copy of the Belgian Fabrique Nationale (FN) MAG-58 series of well-received, gas-operated, air-cooled, belt-fed General Purpose Machine Guns (GPMGs). It is formally designated as the "Machine Gun, 7.62mm, M240" in U.S. military nomenclature and is locally-produced under the FN Manufacturing label, FN Herstal's brand label in the United States. Manufacture began in 1977 and is ongoing while te weapon has seen extensive combat service throughout the Persian Gulf War (1991) and the US-led invasions of Afghanistan (2001) and Iraq (2003). Due to its design being nearly identical to the FN MAG, many key parts are interchangeable between the two designs.

The weapon was first adopted by U.S. forces, the USMC in particular, in 1976 as a co-axial tank and armored vehicle machine gun under the designation of "M240". It was installed in both the M60 Patton and M1 Abrams Main Battle Tanks (MBTs) before being added (as the revised right-side-feed M240C) as secondary weapons aboard the turrets of the M2 / M3 Bradley Infantry Fighting Vehicle (IFV) series.

Due to its growing reliability as a co-axial weapon, the USMC took on a follow-up stock of M240s with the intent of replacing their aging line of cumbersome M60 GPMGs. As such, the M240 was converted for platoon-level service as a portable support weapon, complete with buttstock and pistol grip with adaptability to USMC standard bipods and tripods. In this form, the weapon was formally adopted as the M240G in 1994, its issuance first falling to Fleet Marine Force.

It was the USMC's movement on the M240 that spurred U.S. Army interest in the type and the service then took its own close look at the weapon. It entered evaluations through the M240E1 and this was adopted as the M240B in 1995. The M240B differed from its USMC M240G counterpart in that it incorporated a molded heat shield over the barrel though, beyond this quality, the two weapons remained virtually identical to one another. In 1997, FN Manufacturing was granted a production contract for over 8,100 M240B units for the U.S. Army.

Resemblances to the Belgian FN MAG are apparent in the M240 including its large, rectangular receiver. Standard infantry forms feature an ergonomic buttstock as well as an underslung pistol grip and trigger unit. The barrel sits atop the gas cylinder and a hinged bipod can be fitted near the front of the gas tube. The barrel is capped by a slotted flash suppressor while the weapon feeds from non-disintegrating DM1 or disintegrating M13 linked belts through a left-side feed. The charging handle is set to the right side of the receiver and a carrying handle facilitates transport as well as supports the changing of an overheated barrel. Sighting is through a folding leaf arrangement at rear and a notched blade at front. Optics are also supported, particularly on variants with accessory rail sections set over the receiver.

The M240 is chambered for the 7.62x51mm NATO standard rifle cartridge which provides the needed penetration and engagement ranges for a light support weapon. This is managed through a gas-operated, open bolt action which allows for a rate-of-fire spanning 650- to 950-rounds per minute to be reached (though based on variant and gas setting). Muzzle velocity is rated at 2,800 feet per second with an effective range out to 2,000 yards and a maximum engagement range of over 4,000 yards.
Advertisements

With the variant designations taken order, the M240E4 was the developmental, infantry-level medium machine gun form eventually adopted by the US Army after the US Marine M240G model. This version showcased a span of perforated heat shielding which protected the firer while also deflecting heat signals from the sights. Operational weight of this variant was 27lbs and its formal designation became M240B.

The M240C was brought online as coaxial tank machine gun for the M2 and M3 Bradley and LAV-25 Infantry Fighting Vehicles (IFVs). This version required the traditional left-side feeding of the FN MAG/M240 mechanism to be reversed to feed from the right in an effort to seat the machine gun next to the turret's main gun mounting in the turret. The same weapon is also used in the M1 Abrams Main Battle Tank though in its original left-feeding form. Vehicle/tank forms were given a solenoid firing actuation system as opposed to the standard trigger group and the charging handle was replaced by a cable arrangement.

The M240E1 was developed for use in helicopters and fielded with spade grips and appearing on various mounting options. The weapon could be removed from its post and re-utilized as a standard infantry support weapon by way of an "Infantry Modification Kit". The M240D became the updated version of the M240E1 and includes a section of rail for optics support.

The M240G is the standard US Marine designation of the M240 system and is used in all manner of roles including medium machine gun support weapon and vehicle-mounted machine gun. The series is highly similar in scope and function to the US Army M240B model though lacking the perforated heat shield which, in turn, makes for a slightly lighter weapon to carry - 25.6lb weight. Rate-of-fire is variable through three available gas system settings and spans 650-to 950-rounds-per-minute. The M240E5 was brought along as an improved version of the M240D aircraft/ground model. A new flash suppressor was instituted and a section of Picatinny rail added over the receiver to support use of optics. The M240E5 evolved into the M240H production form.

The M240L is a lightened form utilizing improved, weight-saving techniques during its design and assembly. The variant first appeared in the US Army inventory in 2010 and weighs a manageable 22lbs - a 5lb weight-savings from the original US Army M240B.

Operators (beyond the United States) include the nations of Mauritius, Pakistan, Philippines and Spain.
Advertisements

Full-Automatic
Rounds are automatically ejected from the breech, a new cartridge stripped from the feed and set in the chamber, and rounds are continuously fired so long as the trigger is pulled and an ammunition supply exists. Open Bolt
System utilizes internal mechanism where bolt and associated working components are set to the rear of the receiver with no cartridge chambered; trigger actuation moves bolt forward, chambers cartridge, and fires bullet in single action - ultimately resetting during the complete cycle by way of the generated energy. Gas-Operated
Gas-operated system is featured, typically involving a gas cylinder and rear-driven piston directing energy to the bolt component. (Material presented above is for historical and entertainment value and should not be construed as usable for hardware restoration, maintenance, or general operation - always consult official manufacturer sources for such information) 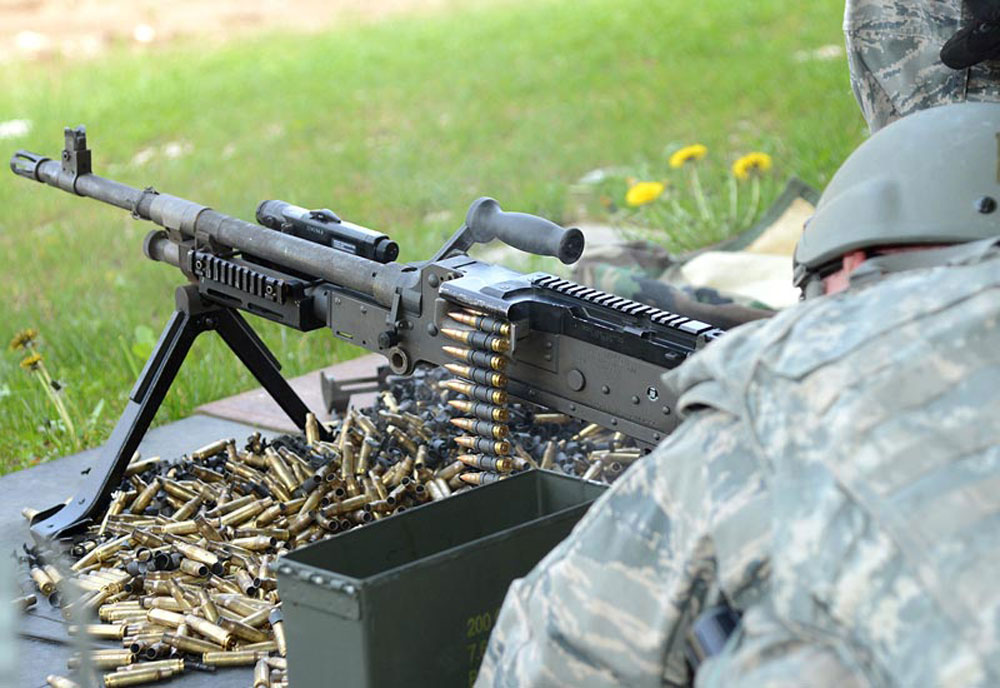 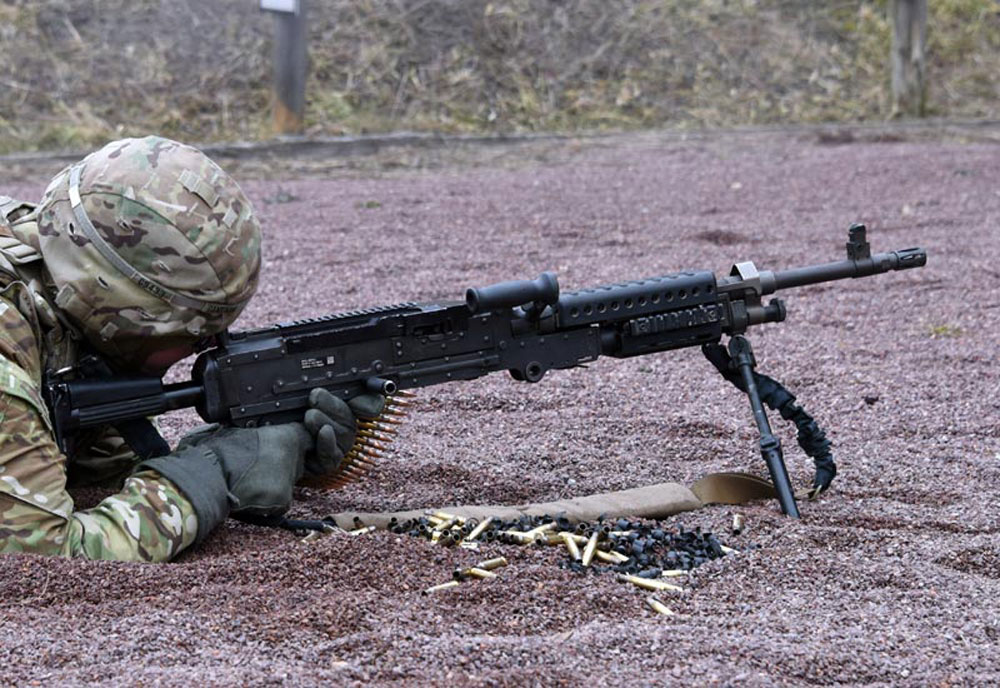 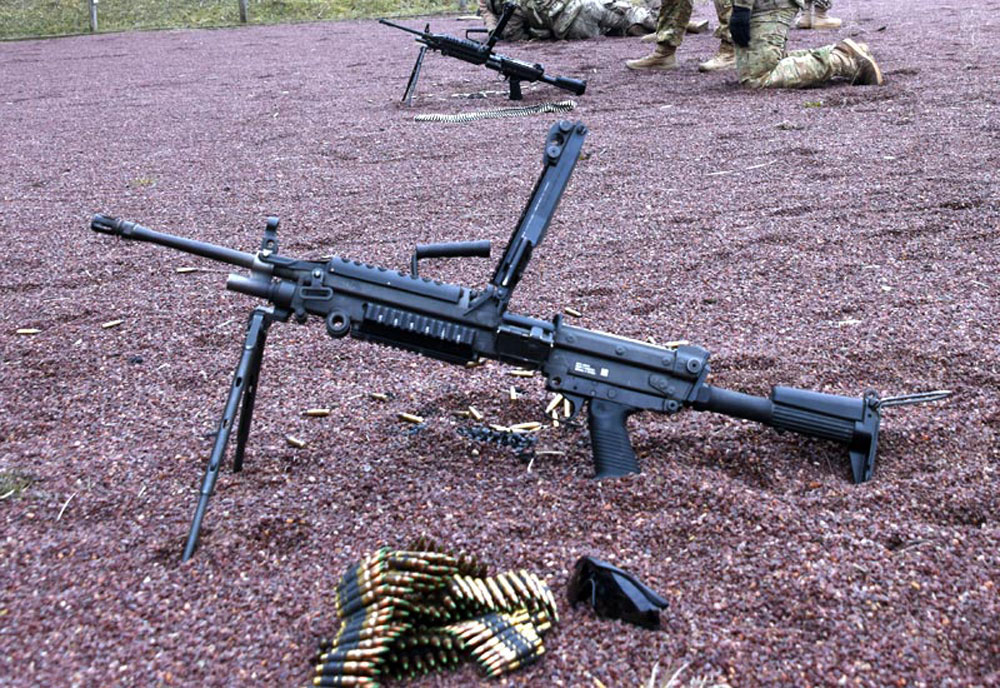 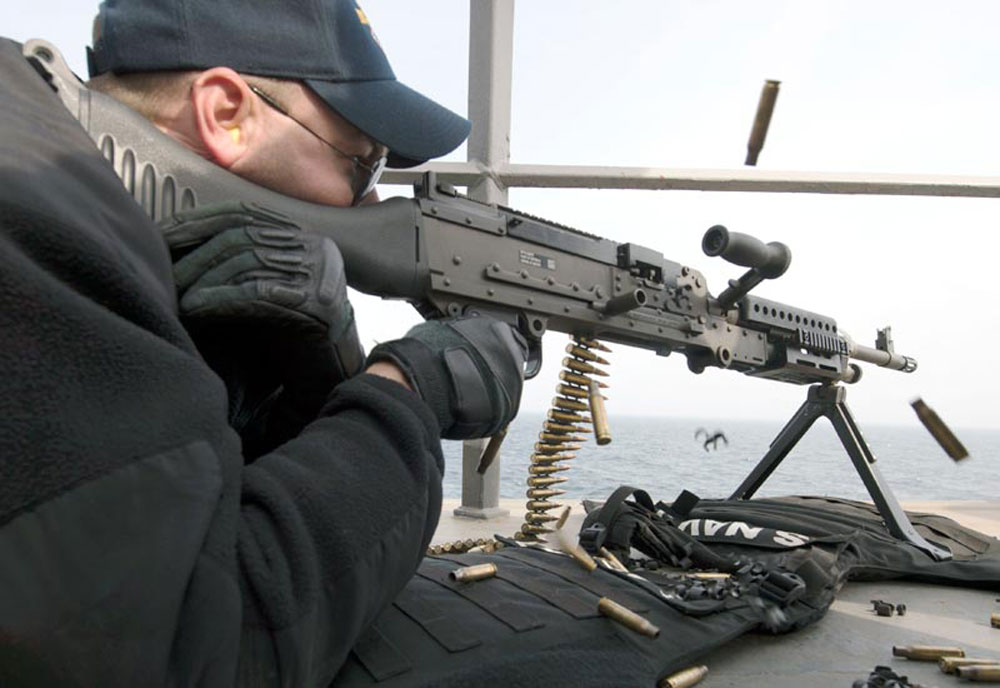 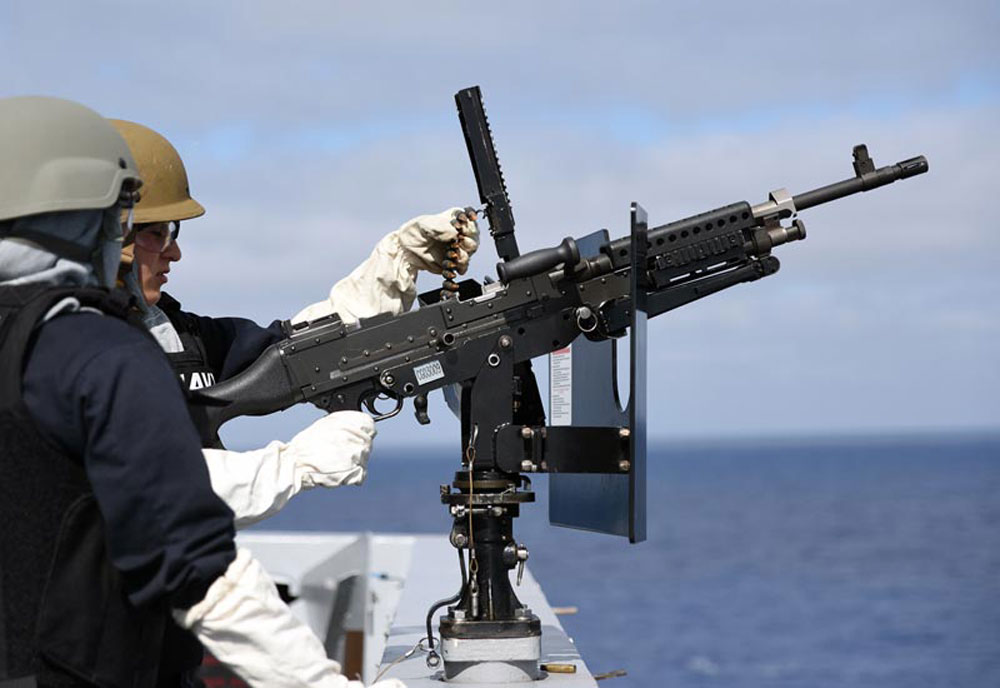 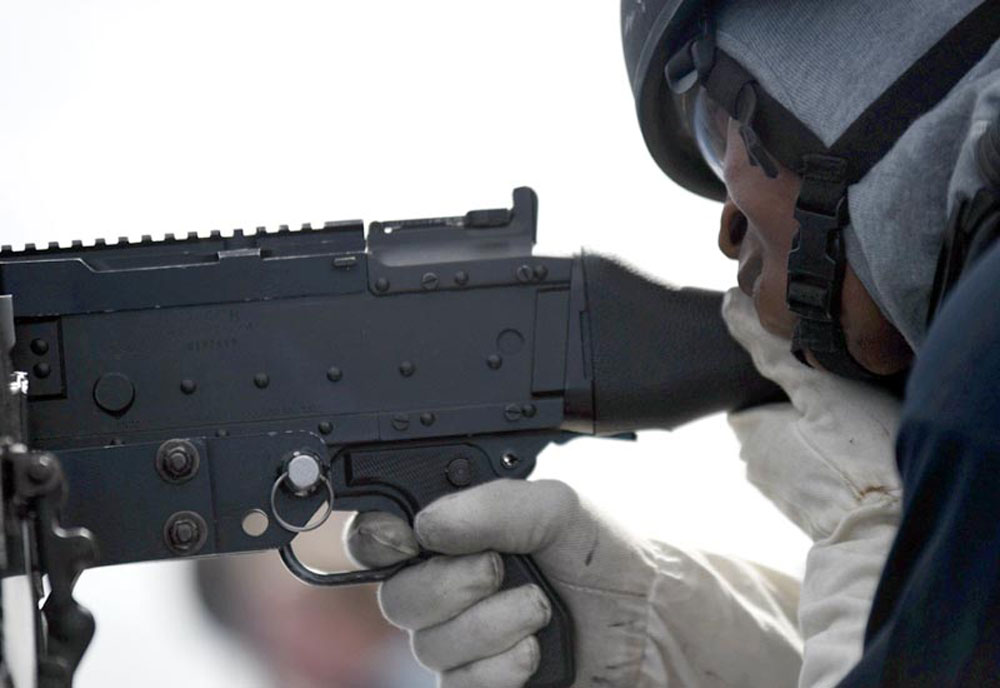 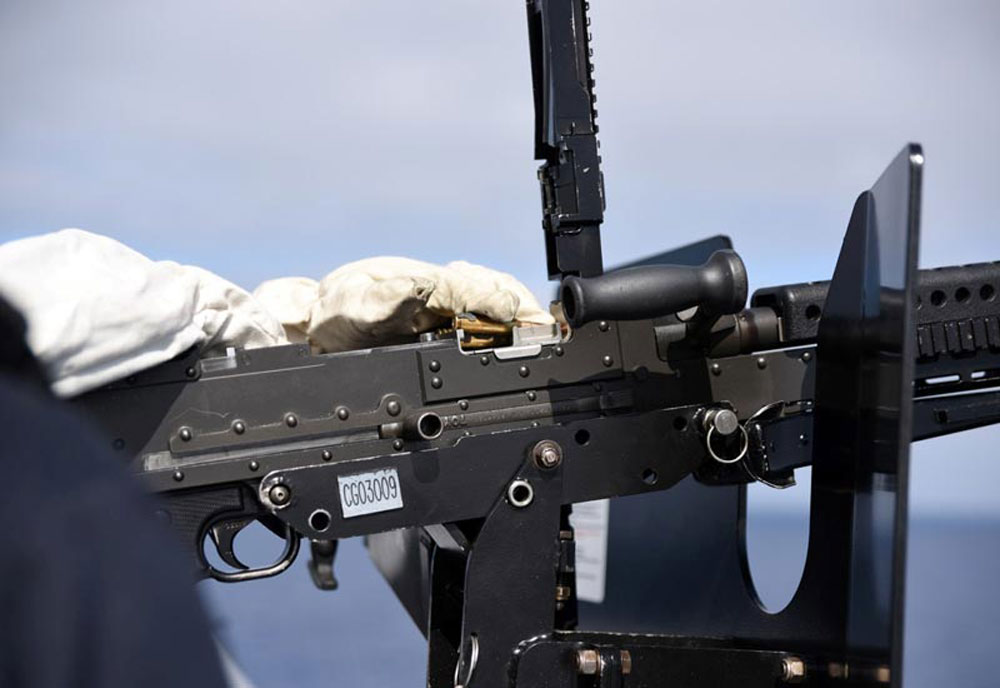 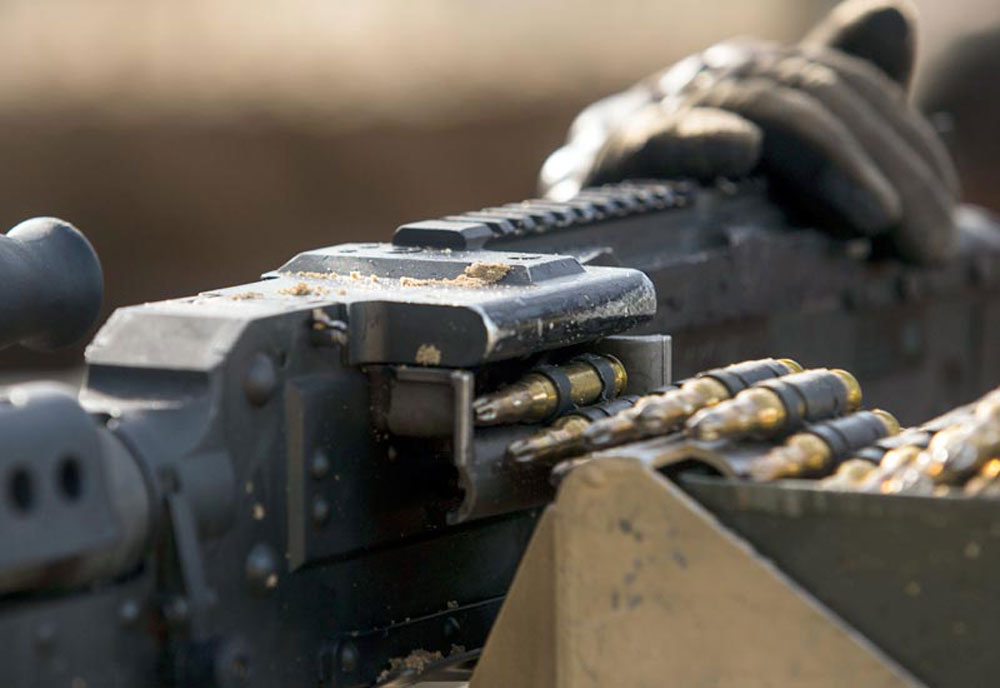 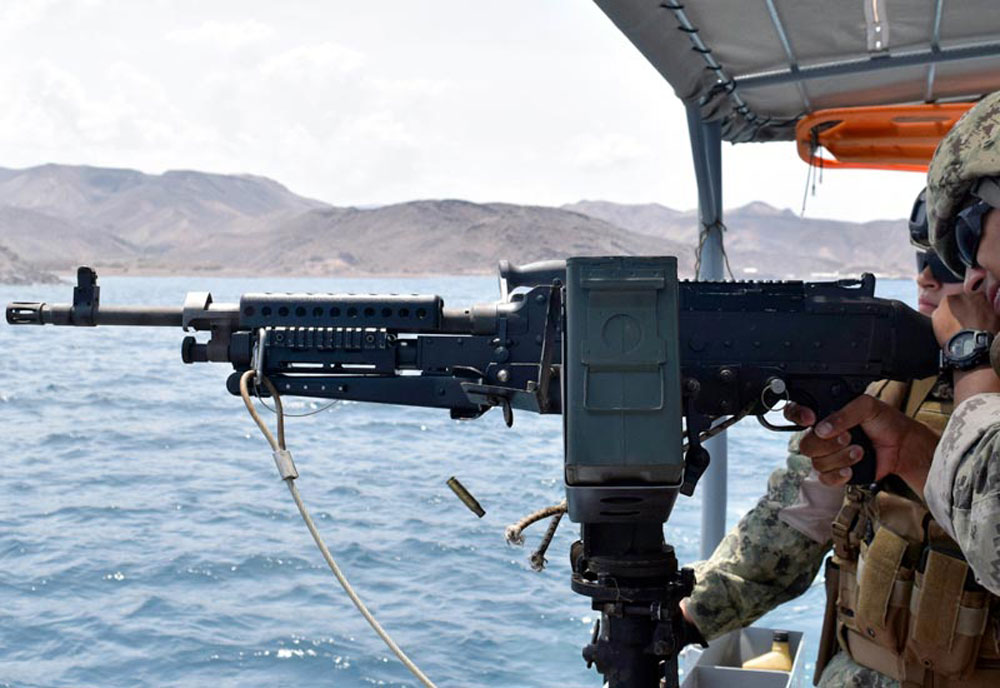 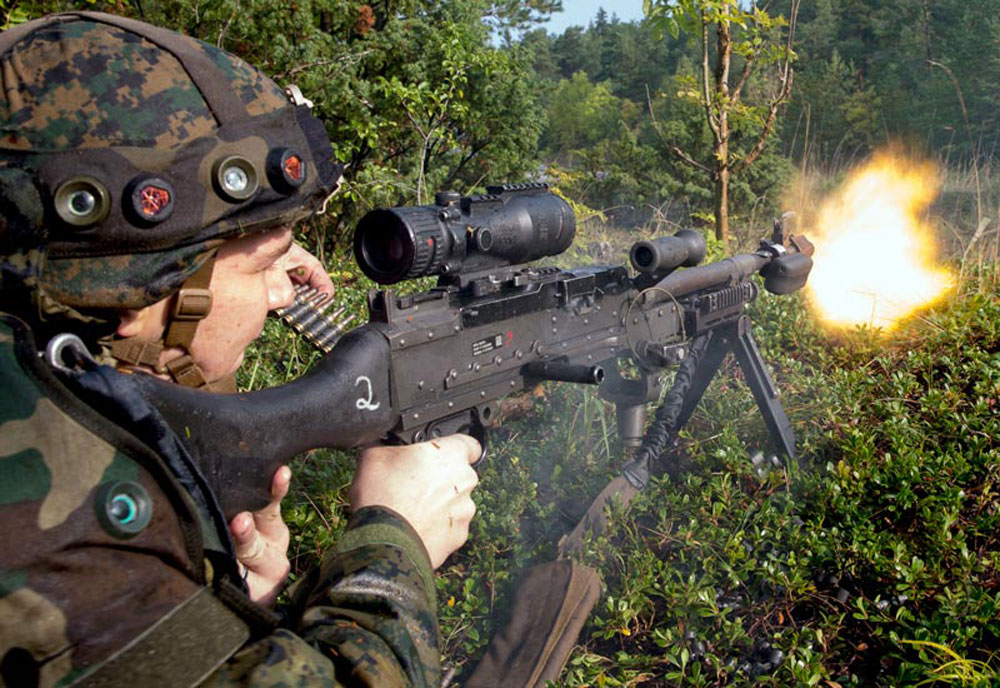 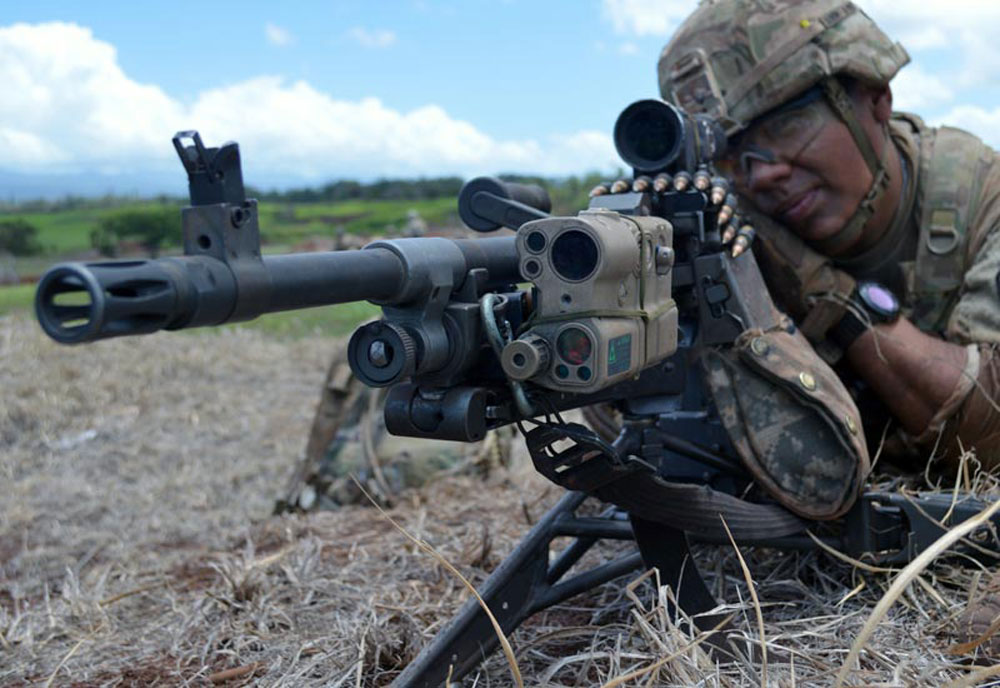