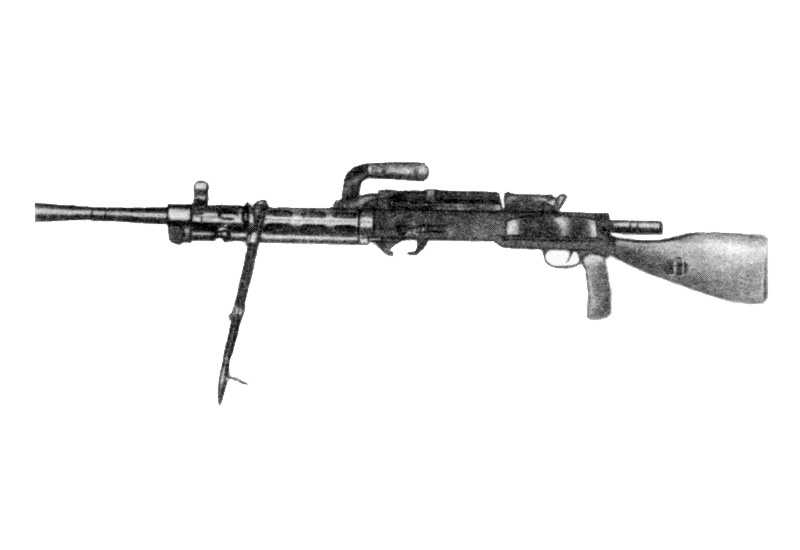 Left side view of the RP-46 company-level machine gun

The RP-46 Light Machine Gun was a further modification of the DP LMG of World War 2 fame.

While the Degtyarov DP Light Machine gun of 1928 served the Red Army quite well during World War2, the design was bettered in the 1943 revision known as the "DPM". A year following the close of the war, the DP family was furthered to become the "RP-46" general purpose machine gun. The key difference between the post-war design and its wartime counterparts was in the designated role - as a "company-level" machine gun intended to provide voluminous support fire of a repeating nature at range. This, therefore, necessitated that the weapon be fitted with a heavy barrel for the sustained fire role and the feed mechanism revised to accept belt ammunition. As its designation suggests, the RP-46 was adopted for Red Army service in 1946.

The basic design found in the DP/DPM family was more or less retained in the RP-46, particularly the crude pistol grip and simplified shoulder stock of the DPM itself. The gas-cylinder was mounted under the barrel as always and a bipod was set at the midway point of the barrel. The barrel was further shrouded by a perforated heat shield for proper heat dissipation required of the new role. The return spring cylinder protruded from the rear of the receiver in the common way as seen in the DPM. Some of the few notable additions to the RP-46 design included a conical flash hider over the muzzle, a quick-change barrel feature (also required of the sustained fire role) and a simple carrying handle. The latter two additions allowed a fire team to relocate to a new position at speed in support of infantry operations as needed. While the 50-round belt-feed mechanism was new to the RP-46, it still retained the capability to fire the 47-round "pan" magazines of the DP and DPM for obvious logistical reasons. Sights were set to the rear and front for some level of accurized fire. Total length reached 50 inches with a 24 inch barrel assembly. Overall weight was nearly 29lbs which made it heavier than her preceding forms and lessened portability in-the-field. Rate-of-fire was listed at 650 rounds per minute with a muzzle velocity of 2,755 feet per second. The RP-46 still utilized the tried and true 7.62x54R Russian cartridge in its gas-operated action.
Advertisements

The reach of the RP-46 was rather substantial and served communist allies and Soviet supporting nations well in her decades of service. Operators of the RP-46 included Albania, Algeria, Angola, Benin, the Central African Republic, China, Comoros, Congo-Brazzaville, Cuba, Equatorial-Guinea, Ethiopia, Laos, Libya, Nigeria, Seychelles, Somalia, Sudan, Tanzania, Togo and North Vietnam. The type made an appearance with the latter in the Vietnam War under ownership of the Vietcong. Production of the RP-46 was such that many can still be found in frontline roles of lesser-developed militaries even today. Consistent with other Soviet-designed weaponry, China eventually undertook local production of the RP-46 as the "Type 58".