The Vickers machine gun system had a spectacular operational run, earning nods in two world wars and countless regional conflicts the world over.

Authored By: Dan Alex | Last Edited: 03/19/2019 | Content ©www.MilitaryFactory.com | The following text is exclusive to this site. 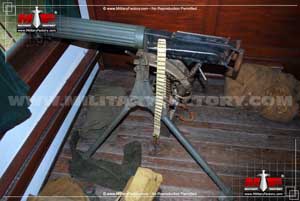 Like most other medium support machine systems born around the turn of the century, the British Vickers Medium Machine Gun originated from the revolutionary Maxim series of 1889 after the Maxim concern acquired competitor Nordenfelt (to become Maxim-Nordenfelt) in 1888 and, ultimately, became a part of Vickers in 1897 (as Vickers, Sons & Maxim). The Maxim type saw widespread acceptance, adoption and copy by many a world power during its operational tenure and appeared in varying forms. The Vickers copy - essentially an improved Maxim - was primarily differentiated from the original in its inversion of the toggle locking action. Vickers also took to reducing the overall weight of the original product and introduced aluminum in concert with the required steel fabrication process. The result was one of the most successful battlefield machine guns ever developed - a design that would see extensive combat service through two world wars and countless localized conflicts to follow. The type formally served with British forces from 1912 to 1968 while a plethora of global users were noted the world over.

The original Maxim machine gun was developed by American Hiram Maxim of Maine who became a British citizen in 1900. The weapon relied on one of the first uses of recoil operation known with patents appearing as far back as 1883. Maxims served well into the 1950s despite their late-1880s origins even seeing action in the Korean War (1950-1953).

The British Army adopted the new Vickers design in 1912 (as the "Gun, Machine, Vickers, .303in Mark 1") and it became its standard support machine gun thereafter. The weapon was initially categorized as a "heavy machine gun" though this designation later gave way to a medium classification upon the arrival of other truly heavy weapons. In the field, the design structure proved robust and the action was highly reliable. Key detriments lay in jamming at the feed and the generally slow rate-of-fire for a weapon of this class. As the Vickers Machine Gun was a complete weapons "system", the design was much more than the gun itself. The entire Vickers Machine Gun system consisted of the machine gun proper, the water condensing can containing the required water supply for cooling, the condensing hose running from the can to the barrel jacket, an optional integrated collimating sight at the rear of the receiver, a wooden ammunition box containing 250 rounds of .303 British cartridges served from fabric belts and the gun mount (Maxim-type sledge or - later - a collapsing tripod). A canvas jacket could be wrapped around the barrel jacket to reduce rising heat from blurring vision ahead of the sight. A muzzle booster could be fitted at the barrel business end for an improved rate-of-fire, providing additional recoil force to the firing action. The operator managed the firing action and traverse through a pair of spade grips fitted at the rear of the receiver. The hinged cocking handle was set to the right side of the body in a conventional fashion.

Of note here is the water-cooled nature of machine guns like the Vickers. These weapons relied on a steady water supply pumped into a barrel jacket that surrounded the barrel assembly. During firing, this action served to cool a hot barrel and prevent it from overheating and fracturing or deforming. The condenser can used in water-cooled machine guns - while supplying the barrel jacket with water - also served to condense some of the steam being generated by the heat of the barrel. If this were not so, the position of the machine gun and crew would be quickly given away to the enemy with the rising steam being the primary indicator. For the Vickers series, the water surrounding the barrel in the jacket would start to evaporate after roughly 750 rounds had been fired. A fresh water supply was as necessary as was an ammunition supply.

The Vickers fired the .303 British cartridge from a 250-round canvas belt. The cartridge was developed in 1888 and first adopted in the Lee-Metford service rifle series before becoming the standard British and Commonwealth cartridge around the world. The cartridge itself was a rimmed design with a noticeable bottleneck and a proven manstopper. The Vickers machine gun action itself revolved around a recoil operation with gas boosting capable of a sustained rate-of-fire of 450 to 500 rounds per minute. Muzzle velocity was rated at 2,450 feet per second with an effective range out to 2,190 yards - maximum ranges out to 4,500 yards though with less accuracy. Sighting was primarily through iron mountings but a collimating sight could be used for long-range service (introduced in 1943). The weapon weighed between 33lbs and 50lbs which required multiple crew for its operation and transport.

Due to the need for multiple components to make the Vickers an effective fighting tool, at least three personnel were required in its management. The primary operator managed the firing function while the secondary operator managed the ammunition supply and feed while helping to clear jams as needed. The third operator supported the initial two and managed the critical water supply during combat. For transport, the weapon was broken down into gun, mounting, ammunition and water supply before relocating to new positions. As such, the Vickers was a cumbersome and heavy breed of weapon but this was somewhat offset by her tactical value and her repeating firepower were well appreciated in warfare. While the weapon could be traversed from left to right in the normal sense, it could also provide plunging arc fire as an ad hoc light "artillery" weapon if need be.

In practice, the Vickers reliability was showcased through all types of abuse and fighting environments. The weapon could get wet, dirty or muddy and remain as capable as the day it left the factory lines and in the brutal, unforgiving nature that was trench warfare, this reliability was very much respected. Furthermore, it could be used as an offensive or defensive minded weapon as needed - supporting allied troop actions or defending key positions with equal fervor and no modification required. The type prove so effective that it was adopted for use in all manner of aircraft, naval surface ships and vehicles. As a battlefield support weapon during World War 1, the Vickers gave an excellent account of herself and was well-liked by her crews - considered by many to be the best machine gun of the conflict.
Advertisements

During World War 2, leftover stocks of Vickers guns came into play once more. Large quantities were lost in the Dunkirk evacuations and thusly production ramped up to meet demand - now incorporating time-saving measures to produce guns in quantity. Early versions of the Vickers Machine Gun thusly featured corrugated jackets while these later streamlined forms now sported smooth jackets. The Mark 8Z "boat-tailed" cartridge was also introduced during the war to provide increased ranges out to 4,500 yards and keep the turn-of-the-century weapon viable for one more World War.

The initial production model became the Mk 1 form which served until 1968. The Mk 1* was an air-cooled aircraft derivative mounted to fighters beginning in 1916 (World War 1) with reduced weight (28lbs) and revised barrel jacket. The Mk 2 was brought online in 1917 and based on the airborne Mk 1* series with further reduced weight (22lbs). The aircraft-bound air-cooled Mk 2* soon followed in 1927 and was highly based on the Mk 2 before it though with a revised feed mechanism - feeding from either the left or right side - producing the Mk 2*(a) and Mk 2*(b) subvariants respectively. In 1928, the Vickers Mk 3 was unveiled and this was based on the Mk 2* with a longer flash hider for use on aircraft. The Mk 4 was developed during the span of 1929-1930 as a vehicle weapon but only completed as working prototypes. The Mk 4B was similar in scope and fitted to vehicles with a redesigned barrel jacket. The Mk 5 of 1932 was another aircraft-mounted version based on the Mk 3 with redesigned receiver access. The water-cooled Mk 6 of 1934 was based on the Mk 4B and intended for vehicular use as was the similar Mk 6*. The mount was improved as was the barrel jacket. The Mk 7 was another vehicle-mounted machine gun system and based on the preceding Mk 6. This sported a reinforced mounting system with a heavier barrel jacket. Many Vickers aircraft machine guns were replaced by other more capable types before World War 2. The Vickers, as anti-infantry machine guns on heavy-class tanks, were largely replaced by the Besa series marks though it saw extended service on light- and medium-class types until the end of World War 2.

A large heavy duty version of the Vickers design existed in 12.7mm form and known rather informally as the "Big Vickers" or "Vickers .50". These were produced in marks Mk 1, 2, 3, 4, and 5 and utilized by the United Kingdom and Ireland from 1932 onwards. The Mk 1 proved the developmental model while the Mk 2, 4 and 5 were base support and vehicle-mounted versions until largely replaced by Besa machine guns. The Mk 3 was a navalized variant for use on ships.

As the Vickers Machine Gun soldiered on into the Cold War with British Army forces, it was not until the arrival of the L7A1 General Purpose Machine Gun of the mid-1960s that the Vickers design was formally removed from frontline service. British Royal Marines continued use of the type into the 1970s. When the Vickers Machine Gun was offeredfor overseas purchase it saw large-scale success. To coincide with local requirements, the Vickers system was applicably chambered. As such, the type also existed in 6.5mm Arisaka (Japan), 7x57 Mauser (Germany), 8mm Lebel (France) and 7.62x54R (Russia) calibers to name a few. During the Cold War, it was modified to take the 7.62x51mm NATO cartridge.

The United States Army utilized the British design as the "US Machine Gun, Caliber .30in, M1915" with local production under license through Colt, seeing service in World War 1 with American troops. These were naturally revised to accept the US-standard .30-06 cartridge (M1906). The Mexican Army procured the American version in 1922 and knew these as the "Ametrallador Modelo 1915". In 1925, Lithgow of Australia began localized production of the Vickers Mk 1 series and were more or less direct copies utilizing the same .303 British cartridge. In Australian Army use, the Vickers was later replaced in service by the MAG 58 series. India and Pakistan were long-time users of the Vickers series and still hold many in active reserve today (2012).
Advertisements 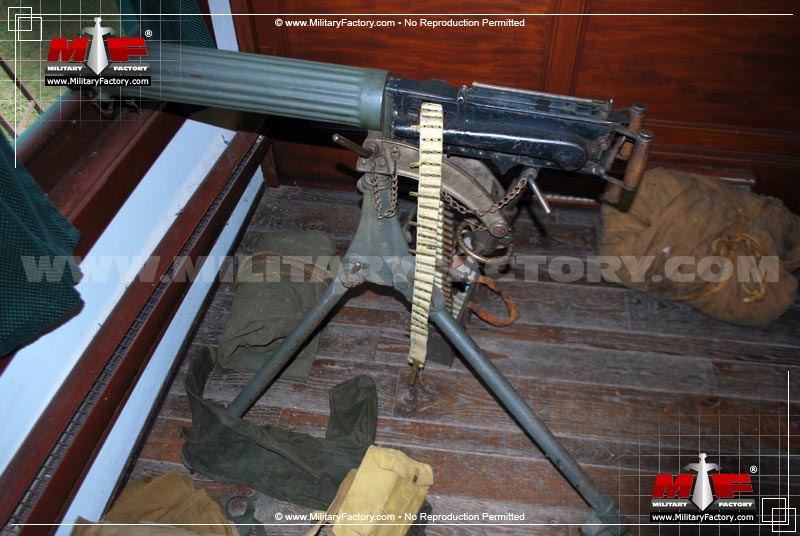 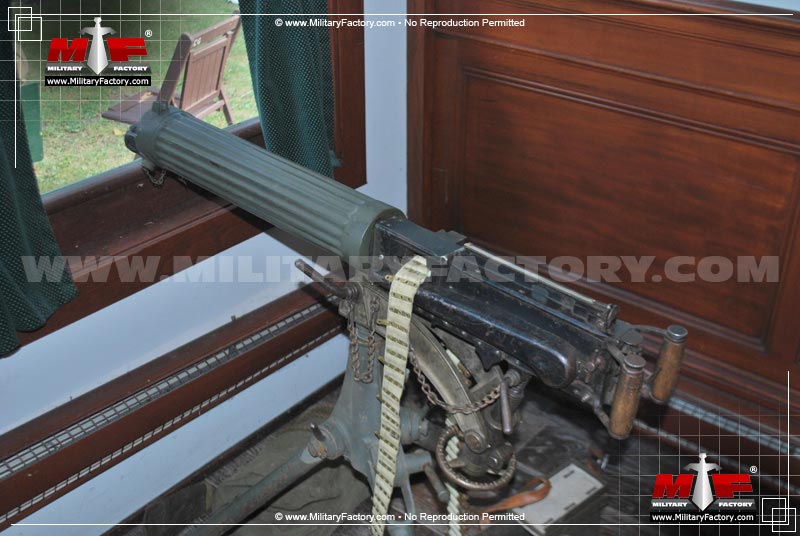 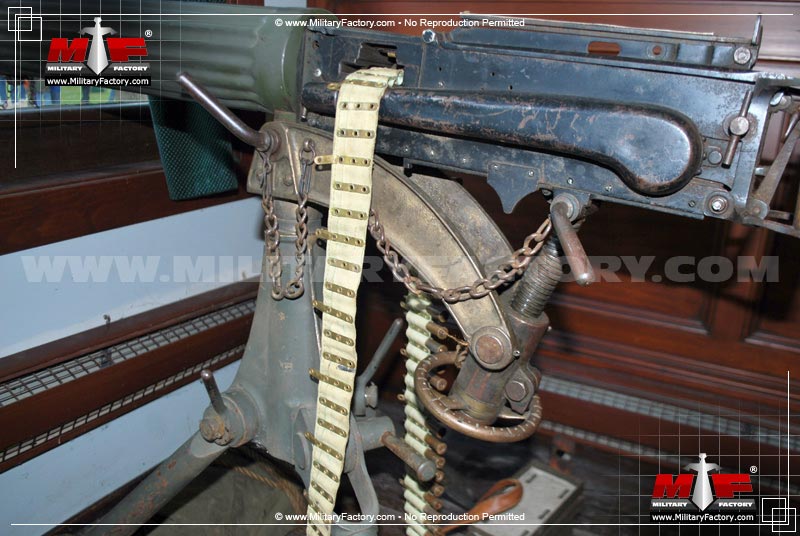 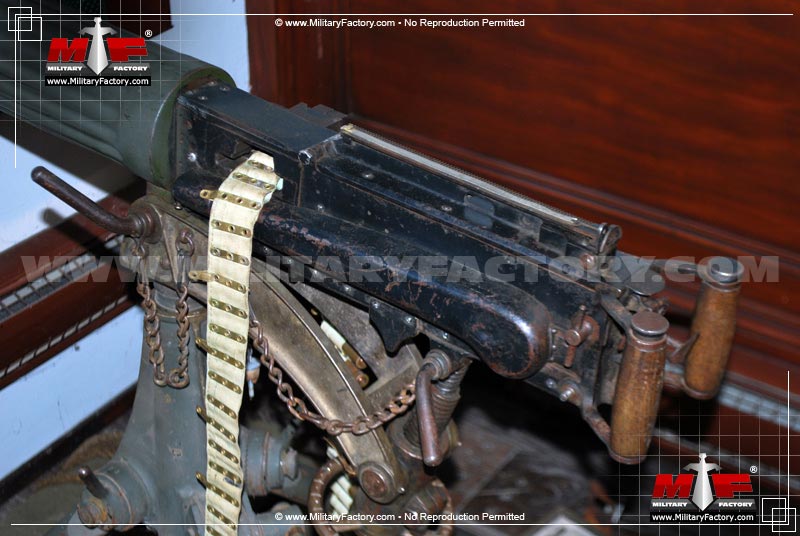 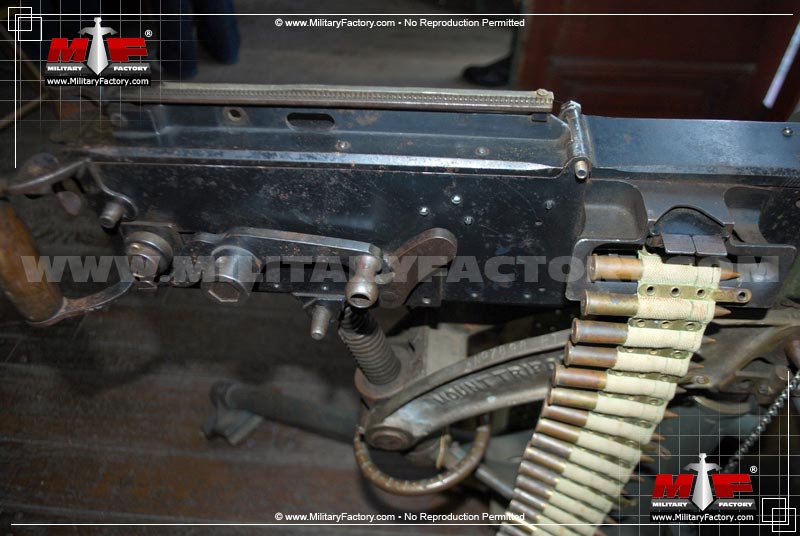 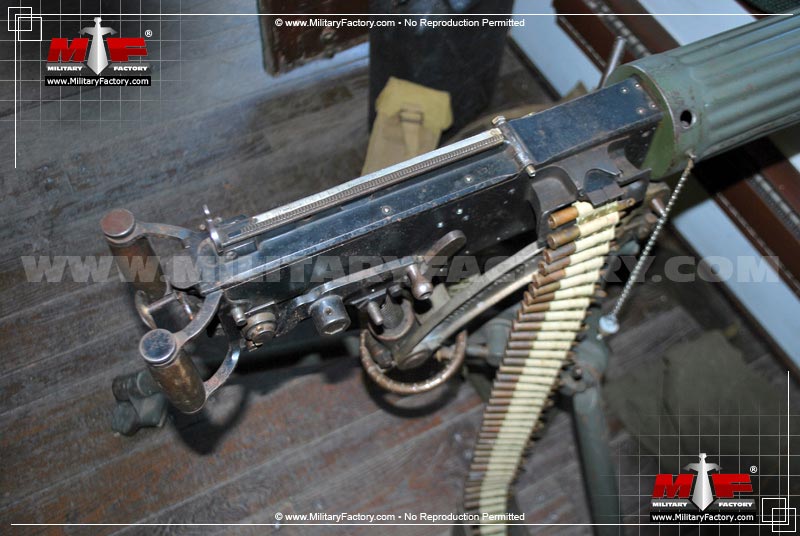 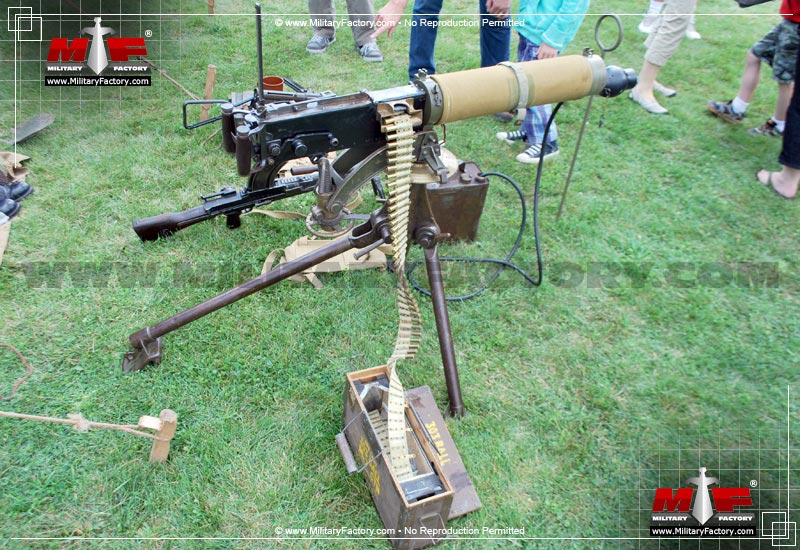 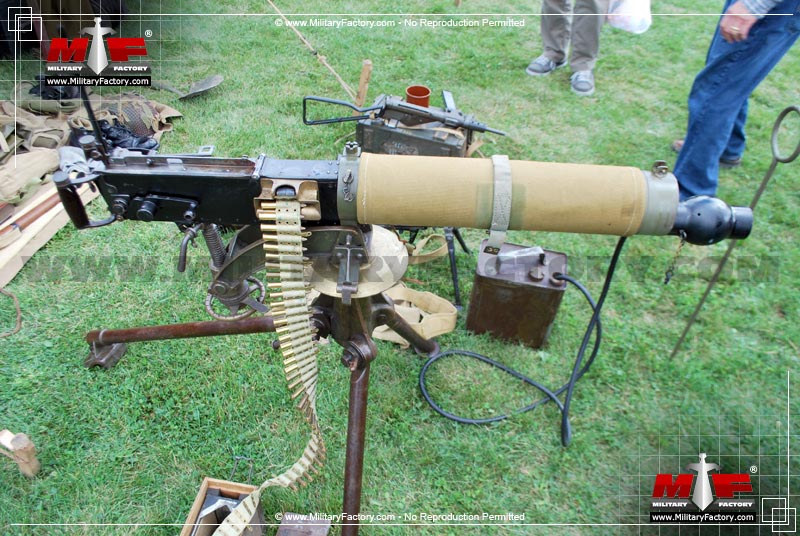 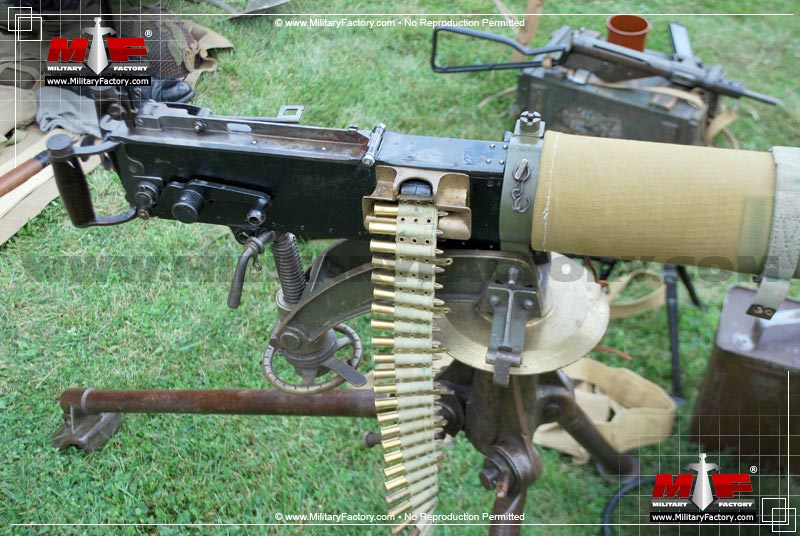 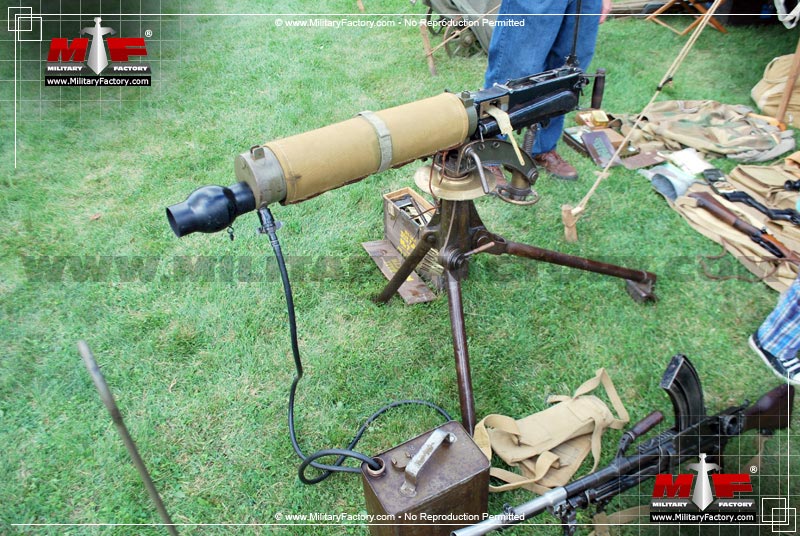 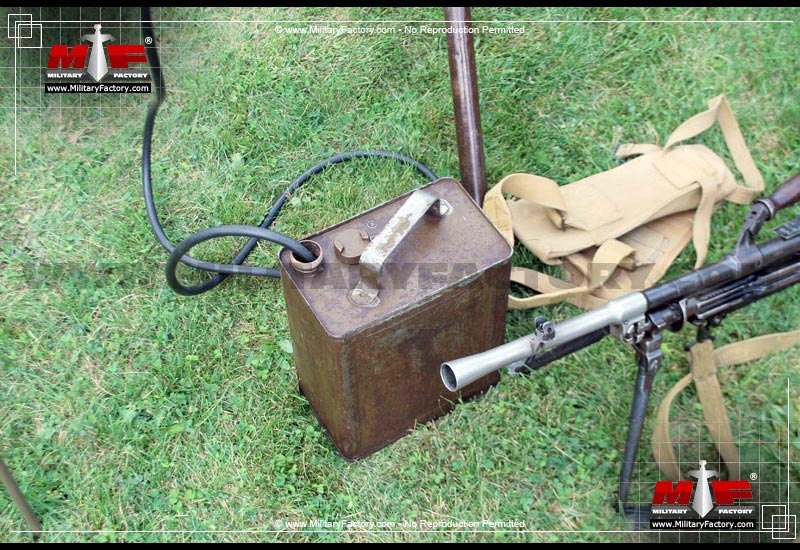 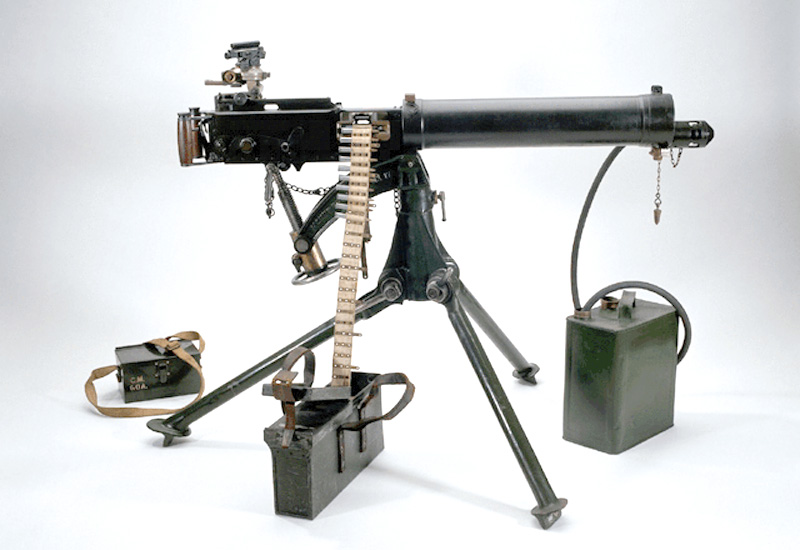