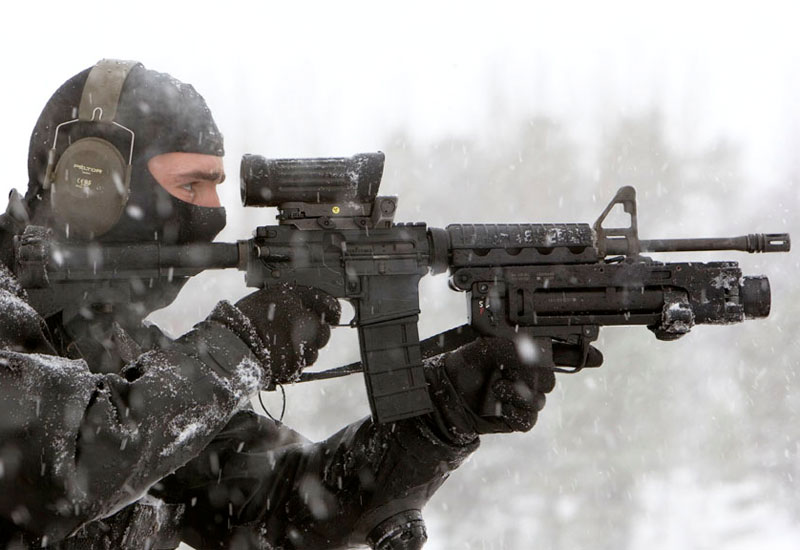 An operator with his fully-laden C8 Carbine assault weapon

The Canadian C8 Assault Carbine is nothing more than a compact version of the Army C7 Rifle.

Authored By: Staff Writer | Last Edited: 06/14/2021 | Content ©www.MilitaryFactory.com | The following text is exclusive to this site.
The Diemaco (now Colt Canada) C8 is the "assault carbine" form of the C7 - the C7 being the standard-issue assault rifle of the Canadian military - equivalent to the American M4 carbine series. The C7 began life in 1984 as a modified version of the American Colt M16A2 Assault Rifle and has since been improved into several viable forms to suit Canadian Army requirements. The key differentiating feature between the C7 and the M16A2 was its use of a full-automatic fire mode. The C8, therefore, shares the same internal working components as the C7 before but sports a shortened forestock and barrel as well as a telescoping butt for use in more confined spaces or close-in combat. The C8 was originally intended for issue to vehicle crews but has since been branched out to include issue to special forces elements, paratroopers and the like - soldiers requiring the facilities of a more compact weapon. Like the C7 family, the C8 also makes use of the 5.56x45mm NATO standard cartridge and this is also from a 30-round curved detachable box magazine. The barrel measures in at 14.5 inches.

The original C8 carbine line has since been broadened to fulfill a variety of Canadian military requirements. The C8A1 is an improved version of the original with a detachable carrying handle and upper receiver utilizing a C79 optical sight. The C8SWF (Special Forces Weapon) has a longer, heavier barrel for assault rifle-type functionality in-the-field. Support for an underslung 40mm grenade launcher is also noted. This version sees service in the British special forces as the "L119A1". The C8FTHB (Flat Top Heavy Barrel) is another version improving upon the basic C8 design featuring a heavy barrel and standard C79 optical sight support. The C8CQB (Close Quarter Battle) is a refined short-range weapon. The Diemaco PDW (Personal Defense Weapon) is similar in scope though a much more compact C8 carbine form.

Diemaco operated under its own label under a Colt production license up until 2005 to which then it was absorbed under the Colt Firearms banner to become "Colt Canada Corporation".

*May not represent an exhuastive list; calibers are model-specific dependent, always consult official manufacturer sources.
**Graphics not to actual size; not all cartridges may be represented visually; graphics intended for general reference only.
Rate-of-Fire
900
rds/min
Muzzle Velocity
2,953 ft/sec
(900 m/sec)