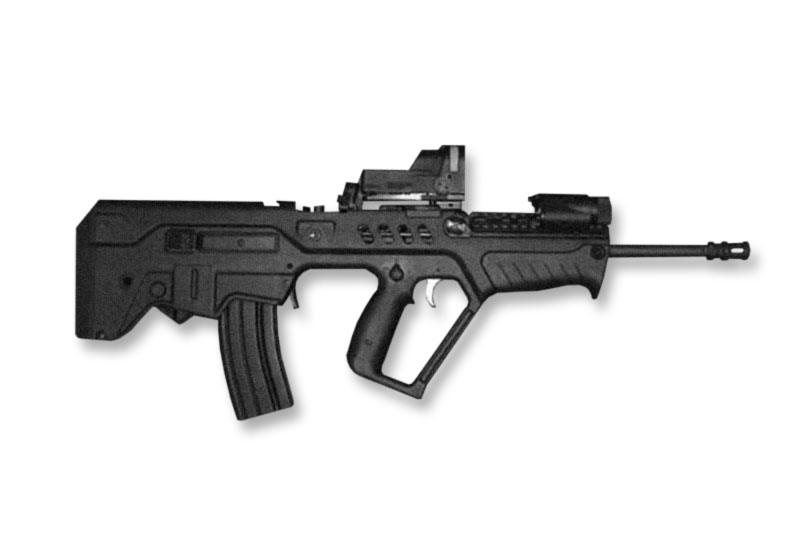 For decades the Israeli Army relied upon its trusted and true line of Galil and M16 automatic weapons in its various battlefield guises - assault rifle, carbine, sniper and designated marksman forms to name a few. In 2001, there was a change in the wind, for the new standard Israeli infantry assault rifle became the TAR-21 "Tavor" designed and produced by Israeli Military Industries (IMI). Design work on the rifle began in 1991, ultimately yielding a product in the "bullpup" configuration. The drive behind the project was in creating a firearm more suitable for the close-quarters nature of urban warfare - a class of warfare that the Israeli Army is exposed to on a daily basis - while still retaining strong medium-range, open environment capabilities.

The bullpup configuration had already been gaining steam in the military realm with many armies realizing its inherent benefits (though there are, consequently, limitations in turn). The "bullpup" layout mainly sees the internal operating action of the automatic weapon relocated aft of the trigger unit and pistol grip. This allows the stock to incorporate much of the internal functionality that is usually housed in a conventional received on a standard-designed long firearm. What this does is allow the assault weapon to utilize a full-length barrel in a more compact form - essentially maintain the ability to fire a rifle-caliber cartridge from a carbine-like body. The compact form provides a more sound hold, closer to the body, and plays well in urban fighting environments. The user's firing hand is situated under the middle of the weapon's body with the rest of the weight being balanced out by the shoulder region and a second hand on the foregrip.

Some bullpup detractors cite the proximity of the cartridge ejection port to the firer's face as well as a propensity for the bullpup design to favor right-handed shooter. Additionally, the closer muzzle means that the operator must exact due diligence in avoiding passing his/her hand in front of the firing weapon. Since the internal function of the weapon is concentrated mainly to the rear of the weapon, this region of the gun supports most of the weight, thusly adding to difficulties in controlling the weapon during full automatic fire ("muzzle climb"). Despite these limitations, the bullpup configuration is optimal for close-in fighting - ranges usually within the scope of the standard infantryman. The Austrian Steyr AUG was one of the first notable widespread uses of the bullpup configuration.

Following the 1982 war with Lebanon, Israeli authorities recognized the limitations of their current stock of infantry assault weapons, particularly when it came to urban warfare. It was not until 1993 that a serious internal move to find a suitable automatic weapon replacement was enacted resulting in the birth of the Tavor project of 1994 headed by Zalmen Shebs. With the selection of a bullpup configuration, the team introduced the design to the Israeli Defense Force in 1995. In 1997, the IDF was beginning to put the Tavor through its initial paces, primarily feeling out the weapons ergonomics and functionality within the scope of the standard IDF infantryman. 2000 marked the start of heavy testing in the field, exposing the weapon to the brutality of war. In 2002, the Tavor was issued to one IDF company for true in-the-field exposure. In 2003, the IDF officially announced its intent to procure the Tavor assault system - as the TAR-21 - in quantity, making it the standard-issue IDF assault rifle. Initial batch production resulted in first production-quality examples being delivered in 2006.

Following in line with other new-generation bullpup automatic weapons, the TAR-21 makes use of lightweight composites in its construction to maintain a more manageable operating weight. The bullpup layout also allows for a more ergonomic hold, particularly over the course of many hours of work for the average soldier on patrol. While ambidextrous facilities are uncommon in many standard-issue assault rifles, essentially favoring right-handed shooters, the TAR-21 actually makes use of an internal function that allows the weapon to eject spent shell casings to the left of the right of the firer - being a truly ambidextrous end-product. However, to take advantage of this feature, the rifle must be opened up and slightly reworked before use. Like other new bullpup designs, the TAR-21 also makes use of a red-dot sight as standard. Other optics of choice can be fitted as well for more accurized fire.
Advertisements

In keeping with previous Israeli Army policies, the TAR-21 accepts the M16-style STANAG magazine family. The weapon fires from a variety of magazine counts while a 30-round count is assumed as standard. Each magazine is curved in the usual M16 fashion and sports a double-column staggered approach. Magazines are inserted into the magazine well aft of the pistol grip. The operator can also manage a safe, semi-automatic or full-automatic mode through a selector switch. The weapon is primarily chambered for the 5.56x45mm NATO cartridge but is also available in the 9x19mm Para and 5.56x30mm INSAS (Indian Army) chambering. The firing action is gas-operated with a rotating bolt system which allows for rates of fire up to 900 rounds per minute with a muzzle velocity nearing 3,000 feet per second. Effective range is out to 1,800 feet based on ammunition type selected.

Since its inception, the TAR-21 has been seen in various forms. The base "TAR-21" designator marks the standard-issue infantry assault weapon. The GTAR-21 is similar in its layout though holds provision for the M203 40mm breech-loaded single-shot grenade launcher - a common fixture in the M16 family of weapons. The CTAR-21 is a compact form of the TAR-21 rifle and takes the series more into the realm of a dedicated carbine. This shorter form - sporting a shorter barrel - allows for it to be used in confined spaces for close-quarters battle. This is ideal for special forces units, commando elements and perhaps maybe even vehicle crews. The MTAR-21 - or "Micro Tavor" - is designed as an even more ultra-compact form of the TAR-21 weapon system, primarily for issue to special forces elements. What makes the MTAR-21 unique is its ability to be modified into a 9mm submachine gun form with a higher rate-of-fire, firing a pistol-type cartridge instead of the rifle-caliber breed. It is also designed to take on an underslung 40mm grenade launcher as well as a suppressor. The STAR-21 is a designated marksman form, meaning that it is issued at the squad-level to elements trained as sharpshooters (not snipers per se). The designated marksman unit allows for accurized, repeat fire at range, which helps to engage targets beyond the range of the standard assault rifle. These versions are issued with a stabilizing bipod assembly (which folds under the forestock) and the Trijicon ACOG 4x telescopic sight as standard. A civilian version of the TAR-21 exists as the Tavor Carbine TC-21 and offered in semi-automatic fire only.

Despite its relative "newness", the TAR-21 family of weapons is already in widespread circulation with those foreign armies allied to Israel or believing in its excellent gunsmithing history. This includes Azerbaijan, Brazil, Colombia, Ethiopia, Georgia, Guatemala, India, Nigeria, Philippines, Portugal, Thailand and Ukraine. The Thai Army is replacing its M16 rifles with the Israeli TAR-21 family. Ukraine is expected to license-produce the weapon locally. India stands to be one of the largest users of the TAR-21 family with its $17.7 million deal signed in 2002 for thousands of TAR-21 automatic weapons from Israel. Indian TAR-21 rifles are designated as "Zittara" for the Indian Army. They are joined by Georgia, having secured thousands of TAR-21s through a $65 million deal.