The AS Val is a specialized suppressed assault rifle used primarily by Russian forces. 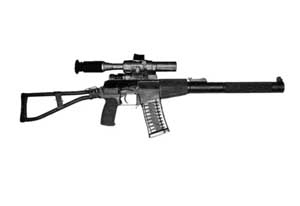 The AS Val is a specialized automatic firearm of Soviet-era origin - essentially an assault rifle weapon system with a permanent silencer installed for clandestine operations. The weapon was designed by the TsNITITochMash state design bureau while production was charged to the famous Tula Arms Plant, the latter amazingly in existence since 1712. The AS Val first appeared in Soviet inventories in 1987 and has since been issued (primarily) to special forces (including Spetsnaz) and top-level security groups though it has also become a staple of the regular Soviet/Russian Army over time.

The heart of the AS Val is its "subsonic" ammunition which works extremely well in conjunction with the silencer component. The weapon is chambered for the "9x39mm SP-6" cartridge which is a rifle-caliber 7.62x39mm case with a special "widened" neck designed to accept a 9mm bullet - the latter a cartridge very common to semi-automatic pistols and submachine guns. This modified Soviet/Russian cartridge has continued to find growing use throughout other specialized weapon families of the Russian military since its inception. As a whole, the AS Val is key to the stealthy nature required of certain combat elements - where neutralizing unsuspecting sentries or fighting one's way out of trouble without garnering unneeded attention is something of a trademark.

Outwardly, the AS Val showcases conventional lines consistent with other assault rifle designs. The receiver holds the major internal working components while the trigger group and pistol grip are well-integrated into the weapon's layout. The trigger is large, suitable for a gloved hand, while the pistol grip is rather plain and not as rearward-angled as in other Kalashnikov-style weapons. The buttstock consists of a metal framework and is collapsible over the left side of the receiver. Its skeletal nature ensures a lighter overall weight and does not impede regular gun functions for the charging handle and ejection port are set to the right side of the body. Magazines are fed just ahead of the trigger group and include 10-, 20- or 30-round detachable, curved box magazines though the 20-round version appears as the standard for the series. The specialized cartridges stacked within the magazine make the magazine deeper than a traditional box. A magazine release is noted just aft of the magazine well and ahead of the trigger component - a Kalashnikov identifier. There is a short forend handgrip set ahead of the receiver and magazine regions. Ahead of this is the principle identifying feature of the AS Val - the heavy duty silencer which appears as nothing more than a featureless cylinder simply added to the gun structure. The silencer is designed and constructed in such a way that the weapon can fire on full-automatic consistently without the silencer assembly suffering any irreversible fracturing in the short-term. A selector switch near the trigger allows for full-automatic or single-shot fire modes. The sights are affixed to the silencer assembly which clears the upper receiver from structural "clutter". Therefore, scopes or other accessories can be affixed to the weapon. Sighting does include standard adjustable iron fixtures (rear sector sight, front post) while various optics (including night scopes) can be installed along the top of the receiver.

The firing action of the AS holds origins in the tried-and-true Kalashnikov pattern and consists of a conventional gas-operation with a rotating bolt. As in other Kalashnikov guns, the gas cylinder is set above the barrel. Rate-of-fire is approximately 900 rounds per minute with a muzzle velocity of about 970 feet per second. As with most "silenced" weapons, range is limited when compared to that of traditional, non-silenced assault rifles - the AS Val managing effectiveness out to 300 meters with a maximum "reach" out to 400 meters. This is largely due to the heavier cartridge and sound suppression system, which lower the muzzle velocity considerably. Overall length of the weapon with the stock extended is 35 inches while a folded stock creates a more compact 24-inch form - suitable for close-in fighting. Unloaded weight is roughly 6lbs.

To date, the AS Val has seen published combat actions in the 1st and 2nd Chechen Wars as well as in the short-lived Georgian conflict of 2008. In the latter action both the Russian and Georgian special forces utilized the weapon.

The VSS "Vintorez" silenced sniper rifle is very similar to the design of the AS Val silenced assault rifle though it is differentiated outwardly by its fixed, hollowed buttstock and a specialized telescopic sight for long-range work.
Advertisements

Cuba; Georgia; Russia; Soviet Union
(OPERATORS list includes past, present, and future operators when applicable)
✓ Automatic Function
Features a mechanical function to automate the firing action. ✓ Assault Rifle
Modern class of long gun featuring select-fire properties, automatic internal function, and magazine feeding. ✓ Silenced
This weapon is either inherently silent/suppressed or can be made so through special assembly added at the muzzle, specialized subsonic ammunition or a combination of both. ✓ Special Purpose
Special purpose weapon for a specially defined battlefield role.

AS Val - Base Series Designation 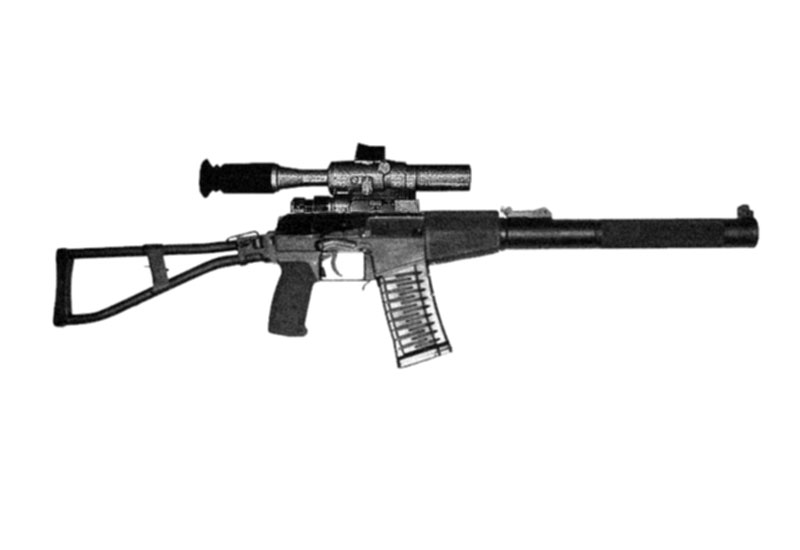