The AK-63 Assault Rifle is a local Hungarian copy of the Soviet/Russian AKM series with a few alterations. 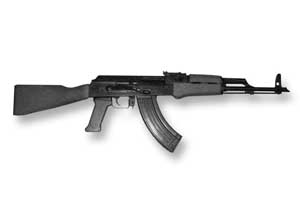 Hungary, falling under the Soviet sphere of influence during the Cold War, made extensive use of the world-famous Kalashnikov AK-47 series of assault rifles debuting in the post-World War 2 world. The type proved a fixture in countless conflicts and battles throughout the decades to follow and owed much of its original design initiative to the German StG44 - oft-termed the "Father of Assault Rifles". In the early 1960s, authorities decided to modernized their AK-47s and moved away from the identifiable Kalashnikov-style wood furniture. The resulting design became the "AKM-63" of 1963 which saw its solid wood stock replaced with a plastic version while vented steel sheeting was used along the forend. A plastic forend grip was also added. By all accounts, the Hungarian version was nearly identical to the Soviet AKM design (upgraded AK-47) of 1959 - even in overall performance.

The AKM-63 was further evolved to become the Hungarian "AMD-65" assault rifle of 1965, this being nothing more than a compact version intended for use by vehicle crews where its smaller nature made it a viable weapon to fire from within the confines of armored carriers. The AMD-65 sported a shorter barrel, folding butt and plastic forward pistol-style handgrip. While the AMD-65 worked to establish itself, the basic AKM-63 itself was utilized until the late 1970s to which Hungarian authorities then charged the local firm of FEG to design, develop and produce a more "economically-friendly" version and address some tolerance issues. Design work ensued and, in 1977, the AK-63 emerged as the new standard-issue Hungarian Army assault rifle, replacing the AMD-65s and AKM-63s then in service, and still following the lines of the Soviet AKM. During its reign, FEG (defunct as of 2004) provided customers with a diverse set of products ranging from military small arms to water boilers.

The AK-63 was ultimately produced in two distinct forms differentiated by their style of shoulder stock - the AK-63F was the solid wooden stock version while the AK-63D sported a folding metal stock (ala the Soviet AKMS). Both versions eventually made their formal entry into the Hungarian Army and were denoted by their "AMM" and "AMMSz" respective designations. The "AK-63MF" then emerged as a modernized version of the AK-63D and this brought along with it Picatinney rail support for the installation of various optics, lights and aimers. Additionally, the model featured a telescoping buttstock assembly for a more compact end-product. A relatively rare, semi-automatic-only variant - the SA-85M - was developed and manufactured specifically for civilian sale in the lucrative United States gun market with importation handled by Kassnar of Pennsylvania. Their numbers were, however, limited due to the 1989 assault weapons import ban making them an extreme rarity today.

Like all other Kalashnikov AK-47-related assault rifles, the AK-63 series made use of the Soviet 7.62x39mm cartridge and relied upon a gas-operated, rotating bolt firing action. Externally, the AK-63 appeared as a clone of the Soviet-era counterpart in its overall presentation save for a few Hungarian-inspired alterations. The weapon was set to fire from 10-, 20- or 30-round detachable metal curved box magazines with a rate-of-fire equal to 600 rounds per minute.

The AK-63 family has gone on to see its own fair share of combat action around the world. Key involvement has been noted in the Iran-Iraq War (1980-1988) to which both sides utilized the weapon in the bloody conflict, the Salvadoran Civil War (1980-1992), the Gulf War (1990-1991), the Croatian War of Independence (1991-1995) and - more recently - the Libyan Civil War of 2011. With that said, the AK-63 remains in large scale use both within Hungary and elsewhere.
Advertisements 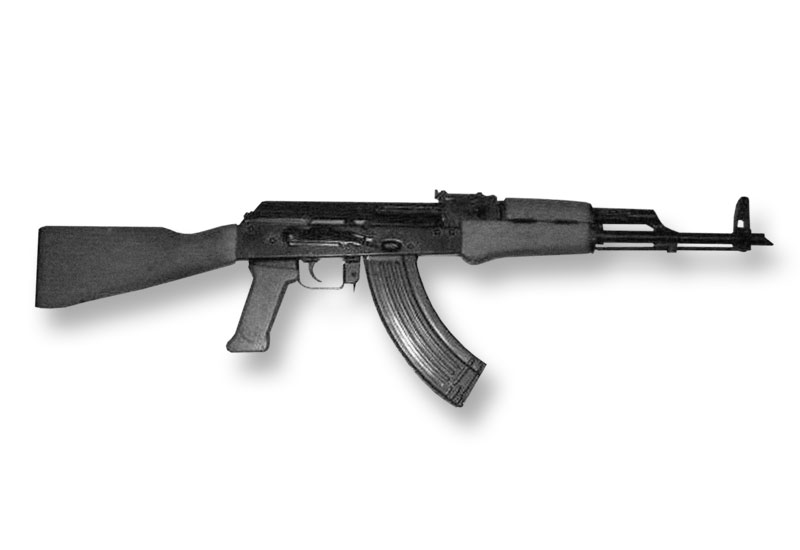 Right side view of the Hungarian FEG AK-63 Assault Rifle