Developed to replace the famous Luger 08 pistol, the Walther P38 went on to make its own well-recognized history during and after World War 2.

Authored By: Staff Writer | Last Edited: 10/19/2017 | Content ©www.MilitaryFactory.com | The following text is exclusive to this site. 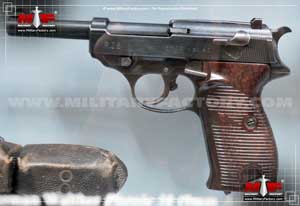 The Walter concern of German designed and developed the "Pistole 38" ("P38") semi-automatic pistol as a direct replacement for the famous Pistole Parabellum 1908 - better known as the "Luger" or "P08" model. An excellent weapon for its time (it first appeared in 1904 with the German Navy), the sidearm was still a turn-of-the-century design at its core, lacking some of the newer features being encountered with handguns of the interwar period, and not wholly designed for expedient, lower-cost serial production. With the emergence of the Nazi Party in the early 1930s, and a rearming of the German ground military, though was given to adopting a modern service pistol to go along with the revitalized German soldier.

The Walther concern was founded back in 1886 and went on to develop a line of useful pistols in the run-up to World War 2 (1939-1945). Developments generally centered around concealable pocket designs which found favor with various markets around the world. Using this knowledgebase, Walther set to work on a pistol designed from the outset as a military sidearm, built for the rigors of battlefield abuse, with construction and assembly methods more suitable for mass production.

Walther's police-minded designs then evolved to become the Walther AP ("Armee Pistole") of 1936. This weapon sported a locked breech arrangement and featured a concealed hammer to prevent snagging. It was chambered in 9x19mm Parabellum, the standard German pistol cartridge, and fired from an 8-round detachable box magazine inserted into the base of the pistol grip. A short-recoil action was used and a iron sights allowed for the necessary training of the gun at range. The P38 was a Double-Action ("DA"), semi-automatic service pistol with ribbed plastic grips and a cut-out slide design - wholly unique in the grand scope of World War 2 service pistols where many mimicked the famous lines of the Browning M1911.

While only a few of the AP-models were manufactured, it was this design that was passed to the German Army for testing. While evaluations were underway, Walther offered the weapon to the civilian market as the Walther HP ("Heeres Pistole"). The Germany Army then came back and requested an external hammer be fitted as soldiers appreciated the quick recognition of the hammer status. Additional review eventually led to the gun's formal adoption in 1938 as the "Pistole 38" or "P38". 1939 also saw an order come in from the Swedish Army who looked to make the P38 their next standard service pistol as well.
Advertisements

When Germany committed to total war through its invasion of Poland in September of 1939, World War 2 had officially begun. Walther ramped up its production of the P38 pistol and this led to the Swedish order being cancelled and civilian market forms disappearing to shore up the German Army need. While primary manufacture of the gun emerged from Walther itself, Waffenfabrik Mauser AG and Spreewerke GmbH were also tabbed with serial production of the series. As more and more factories in foreign lands fell under the might of the German Army, so too did places like Fabrique Nationale of Belgium and Waffenwerke Brunn and Ceska Zbrojovka of Czechoslovakia contribute to the overall total of available P38s. Production for the German Army ran until the end of the war in 1945.

In practice, the P38 became a valuable sidearm for its operators. It was of a sound semi-automatic design whose operation proved excellent and reliable even under the most adverse of conditions. Indeed, soldiers praised its service along the Eastern Front where weather proved just a much an enemy as did the Soviets. Its design made for a weapon that was easy to clean or repair in-the-field and short range accuracy was well noted during close-quarters fighting. The P38 was nearly as prized by Allied soldiers as was capturing a fully-working Luger pistol in the fighting - such was the respect for this weapon.

With the end of the war in 1945, production of P38s was allowed to continue though none were meant for the German Army. Operators went on to include Austria, Finland, France, Italy, Norway, Pakistan, Portugal, South Africa and Sweden (among others). During the ensuing Cold War years, when Germany remained a politically and geographically divided nation under the victors of World War 2, the West German army was allowed to re-adopt their P38 as its standard service pistol. Renewed production for the Army from Cal Walther began in 1957 and the P38 remained the standard service pistol from that time until 1963 - one key difference lay in the aluminum frame now used over the original wartime model's steel frame. From late 1963 onwards, new post-war manufacture produced the "Pistole 1" ("P1") designation which brought about further subtle changes in design. The P1 was in service until retired in 2004 in favor of the modern Hecker & Koch USP ("Universal Self-Loading Pistol") as the "P8" detailed elsewhere on this site.

Some police and military forces today continue use of the famous P38 series. Manufacture has totaled about 1 million units.
Advertisements 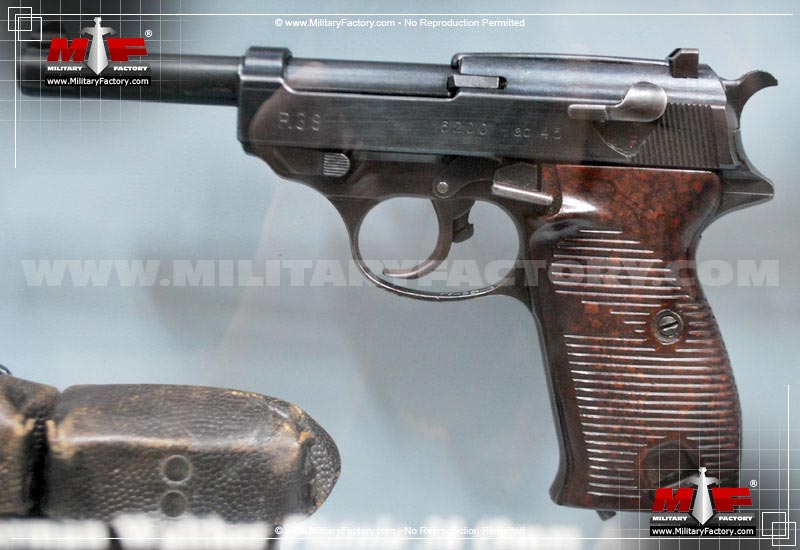 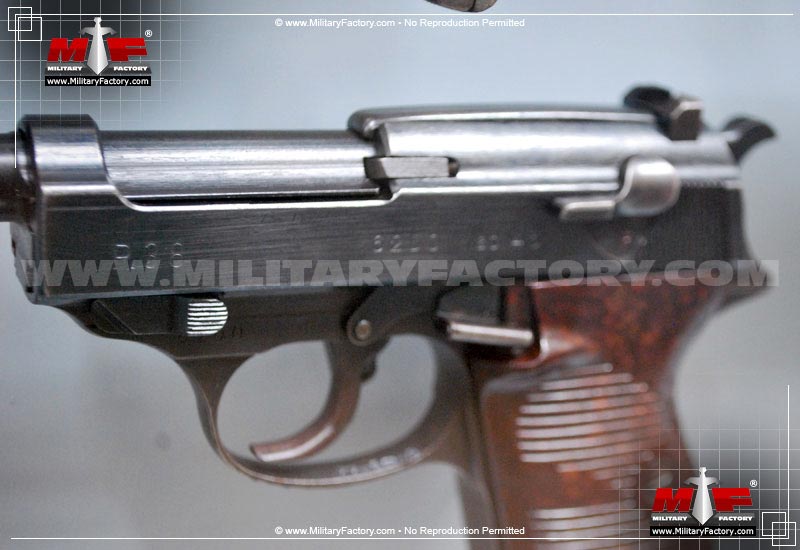 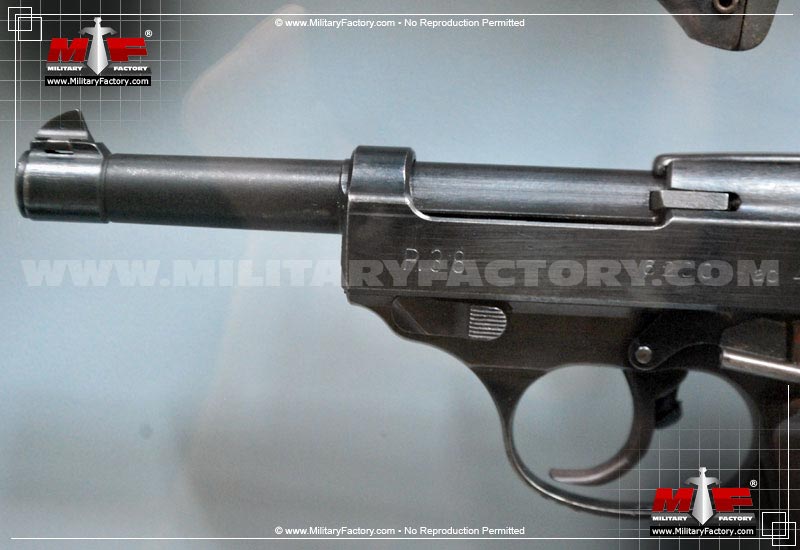 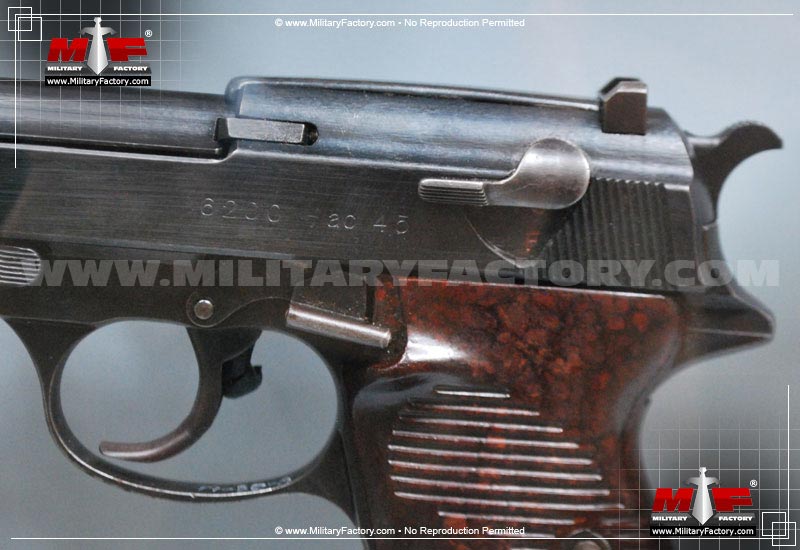 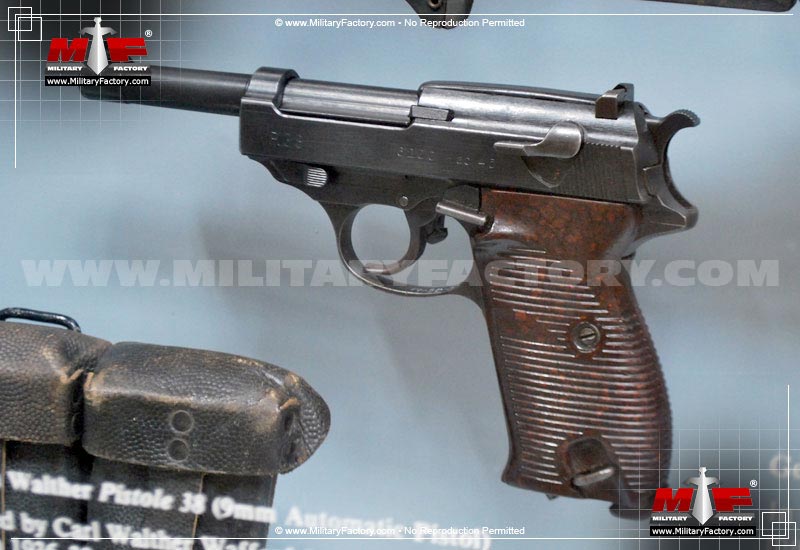 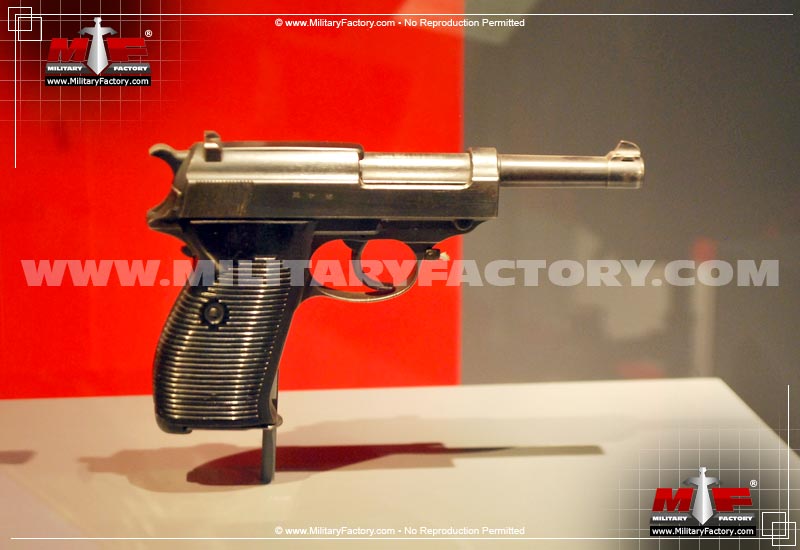 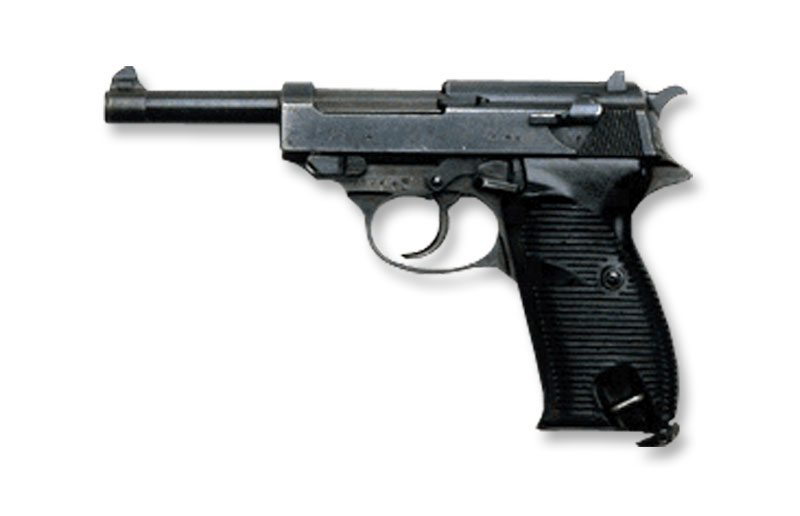