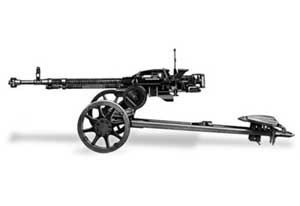 The Soviet DShK Model 1938 heavy machine gun was developed to a Red Army requirement prior to World War 2 (1939-1945) to replace the aged Maxim Model 1910 (Soviet designation of ("PM M1910"). The newer mark proved to be the same class of weapon as the well-accepted and respected Browning M2 and equally as popular the world over. The Model 1938 served throughout World War 2 with Red Army forces and into the Cold War in a more refined, modernized form. The sheer production numbers have given the DShK series such a reach that the weapon still enjoys widespread use even today (2013).

The Soviet military understood the value of quality heavy machine guns in its arsenal even prior to World War 1 when the Maxim Model 1910 (Soviet designation of "PM M1910") was in use. These weapons were entire systems consisting of the gun with integrated cooling jacket over the barrel, a heavy duty receiver design, basic spade grips, a wheeled carriage and included armored shield for the gunnery crew. The 140lb weapon was chambered for the 7.62x54mmR cartridge and managed a rate-of-fire of 600 rounds per minute through a short-recoil, toggle-locked internal action. The type was produced from 1910 to 1939 and became a stable of Imperial Russian / Soviet military use in that span while also seeing use with the forces of the Austro-Hungarian Empire, China, Estonia, Finland, Hungary, Iran, North Korea, Mongolia, Poland, South Korea, the Ottoman Empire (Turkey) and North Vietnam in time. Production was restarted after the German invasion of the Soviet Union in 1941 and spanned from then until the end of the war in 1945.

As steady as M1910s were, they proved exceedingly limited for a Soviet military looking to streamline its mobility for a future war with one of its many neighbors. As such, a new design was sought though one with the same in-the-field robustness as the Maxim design. Origins of the DShK series lay in an early initiative that brought together the work of Vasil Degtyaryov and Georgi Shpagin, the new weapon incorporating the gas operation and locking facility developed by the former with the feed mechanism developed by the latter. The design grew into a lengthy (though lighter) weapon chambered for the large 12.7x107mm Soviet heavy machine gun cartridge operating through a rotating cylinder feed system. The rotating system stripped a cartridge from the incoming belt magazine and delivered the cartridge to the chamber ahead of the bolt. The weapon sported a rectangular receiver with dual spade grips for a firm two-hand hold. Sighting was through a basic iron arrangement affixed over the receiver and barrel. The long-running barrel was partially shrouded by a section of cooling fins giving the weapon a throwback look to machine gun designs emerging in the 1920s and early 1930s. The muzzle was capped by a noticeably large brake while the gas cylinder - which was used in the action - was fitted under the barrel. The weapon was issued atop a rather clumsy and heavy steel-framed, two-wheeled carriage with tow arm - the same cumbersome unit of the preceding M1910 mark which, once again, limited the weapon's tactical flexibility. After passing the requisite state trials prior to acceptance, the weapon was adopted and formally recognized in inventory as the "Degtyereva-Shpagina Krupnokaliberny 1938" - or "DShK Model of 1938" or "M1938" for short. The DShK series gun weighed in at 75lb compared to the 140lb unit of the PM M1910.
Advertisements

The DShK became the standard heavy machine gun of the Red Army during World War 2. After the initial rush of German forces into the Soviet Union beginning in June of 1941 (through Operation Barbarossa), the Soviet Army lost much men and equipment during the ensuing confusion and subsequent fighting. Production of new weapons (now at relocated facilities) ramped up to extreme levels and Model 1938 machine guns appeared everywhere an in various battlefield roles as needed - either as suppression-minded offensive artillery-like weapons and defensive fixed gun positions to anti-infantry tank-/vehicle-mounted machine guns and anti-aircraft fixtures at strategic junctures. The DShK gave a good, healthy account of itself in the fighting that followed and became known as a reliable and lethal ranged weapon on par with the competing Browning design - its key detriment being the heavy wheeled carriage having to be towed by several personnel. While each gun element weighed in at a manageable 75lbs, when combined to the carriage, the entire system could exceed the 300lb mark. A slightly revised feed mechanism was adopted in 1940 after frontline experience dictated the change and this produced the "Model 1938/40" with its reworked receiver. Another major feed revision - the "Model 1938/46" (also known as "DShKM") with its revised feed now based on the RP46 belt-fed machine gun - appeared in the post-World War 2 world. The Model 1938 could be found on all manner of Soviet tanks as a cupola weapon or turreted coaxial defense system during World War 2 and a special tripod was developed for its use as standalone anti-aircraft weapon.

The production reach of the DShK Model 1938 series was such that it went on to see extensive combat service all over the world including heavy use in multiple high-level conflicts such as the Korean War (1950-1953) and the Vietnam War (1955-1975). The series proved a favorite of Eastern European, Asian, African and Middle East users alike, primarily due to Soviet sway in key regions and governance of nations that, today, now reside independent of Soviet/Russian rule since the collapse of the Empire in 1991. The Model 1938 has still been seen in recent combat, noting such actions in the Libyan Civil War of 2011 and the ongoing Syrian Civil War (2011-present). Coalition forces also faced it in their marches through modern Afghanistan and Iraq following the 2001 and 2003 invasions respectively. The DShK system has seen use by rebels and guerilla fighters atop makeshift "technical" vehicles in all manner of localized fighting against government forces, such is the proven adaptability of the DShK family of machine guns.

The DShK has been produced under license in Czechoslovakia (former), China, Iran, Pakistan, Romania and Yugoslavia (former). Over 70 users worldwide can lay claim to its battlefield usefulness and value.
Advertisements 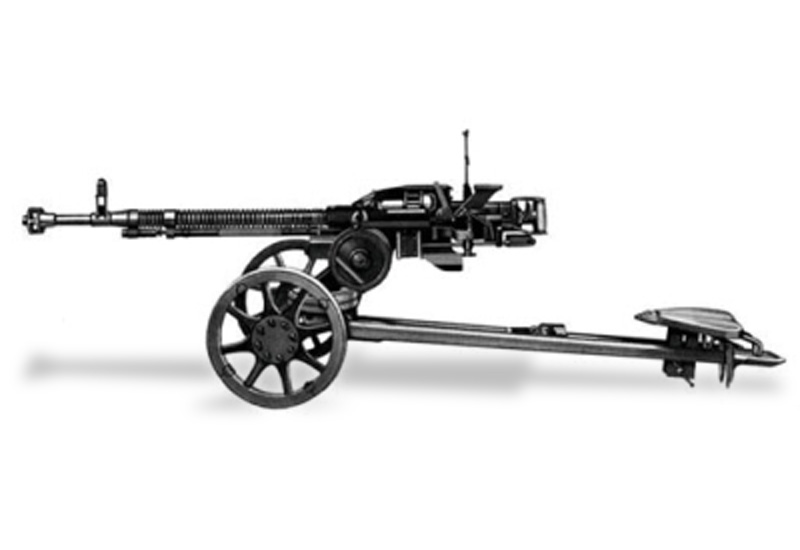