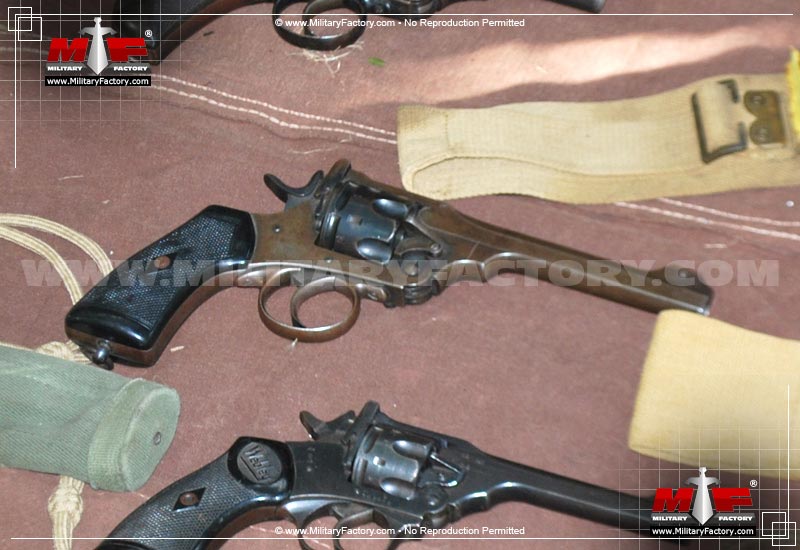 Authored By: Staff Writer | Last Edited: 08/09/2016 | Content ©www.MilitaryFactory.com; the following text is exclusive to this site.
The Webley service revolver first appeared in 1887 and manufactured under the P. Webley & Sons brand label, selected to replace the disliked Enfield Mk I and Mk II line. The revolver carried a largely conventional yet distinct appearance which included a hinge for the frame and barrel to move downwards, a short four-inch barrel assembly for maximum compactness and a "bird's beak" style butt. All other elements were basic including a curved grip handle integrated into the frame, an underslung trigger group with oblong ring and exposed hammer. As with other revolvers of the period, the Webley also features lanyard ring under the grip handle. A front sight was position over the muzzle in the usual way while rear sighting was through a notch assembly.

The revolver was chambered for the .455 Webley Mk II cartridge of which six were loaded by hand into each awaiting cylinder. The break-action design of the frame allowed the cylinder to move slightly forwards and expose any spent shell casings in the cylinder, these automatically dropping out on their own while ready-to-fire cartridges were (theoretically) retained. The action was similar to the one as featured in the short-lived Enfield Mk I/Mk II service revolver taken up as the standard British Army sidearm from 1880 to 1887. The Webley design operated from a double-action or double-action only (DAO) system and featured a muzzle velocity of 620 feet per second with an effective range out to 50 yards.

The Webley initially appeared through the Mk I production model. This was followed in 1895 by the Mk II which incorporated changes to the grip and hammer. The Mk III was a revised form of the Mk II with a new barrel and improved cylinder lock function. The Mk IV was offered from 1899 and onwards and was known as the "Boer War" model using higher quality materials in its construction. The Mk V was an improved design appearing in 1913 and included support for smokeless cartridge ammunition.

The final Webley revolver form in this series was the definitive Mk VI which served British and commonwealth forces throughout World War 1 (1914-1918) and into World War 2 (1939-1945). The variant was given a new grip handle and supported a field bayonet. All other characteristics was based on the preceding Mk V offering. The Mk IV proved its worth across the battlefields of two World Wars and lesser conflicts in-between. They were largely replaced by the newer Enfield No. 2 line of revolvers appearing in number from 1932 inwards. Mk VI models were produced up until 1921 and saw official and unofficial use into 1963. Approximately 125,000 were produced in all.