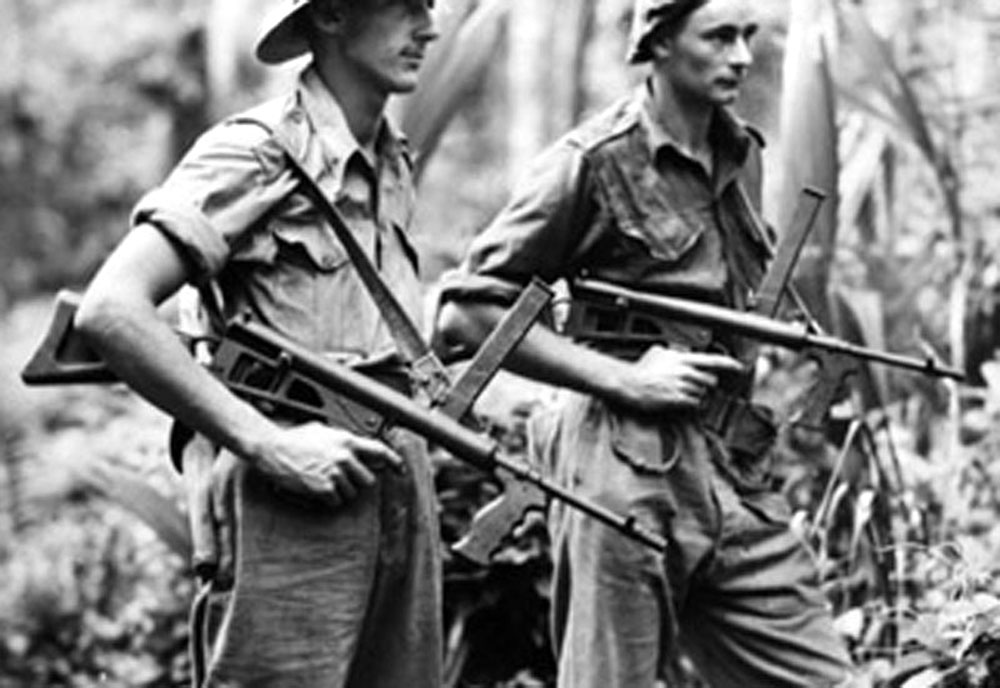 The Owen submachine gun was the only Australian-designed small arm of World War 2.

Despite its obvious battlefield value today, world militaries took some time to warm up to the idea of procuring and fielding submachine guns in quantity alongside their trusted and true bolt-action service rifles and support machine guns. A few submachine guns were available in the years following World War 1, chief among these being the famous American M1 Thompson gun while the first "true" submachine gun - the German Bergmann MP18 - was fielded at the end of World War 1 and saw service until 1945.

Prior to World War 2, the Empire of Japan had become a military-minded regional power and their invasion of the Asian mainland preceded their eventual expansion across the South Pacific towards Australia proper. Naturally, there was a certain uneasy feeling about the Japanese military setting up bases of operation so close to the mainland and Australia was therefore forced to create a military war industry that was - essentially - not in existence at the time. It would rely largely on the Commonwealth and America for her protection from a Japanese invasion - which was a very real threat.

Australian Evelyn Owen (1915-1949) was born an inventor and took a shine to firearms of all sorts, designing and building them from an early age. When Germany invaded Poland in September of 1939, and following British policy, Australia formally declared war on the European power. What this did was force the nation of Australia to modernize much of its infrastructure including that of heavy industry. As the Australian military lacked much in the way of producing their own weapons at the outset, they took on deliveries of foreign-developed aircraft, tanks and guns to stock their war-making inventory.

The Owen prototype sat unnoticed for some time until the gun was found by neighbor Vincent Wardell who happened to manage the John Lysaght Factories. Wardell saw the value of the weapon's design and construction and made it possible for Owens to be reassigned to the Army Inventions Board. Much convincing lay ahead for the Australian government was banking on the receiving thousands of the excellent Sten systems from Britain but work on the Owen proceeded nonetheless.

As such, Owen continued development of his gun while the Australian government finally took notice - the Army still being skeptical. The Owen gun was further developed into several similar yet distinct prototypes chambered to fire a different caliber cartridge for evaluation. The testing also pitted the Owen design against the tried-and-true American M1 Thompson and British Sten submachine guns, all three being exposed to the rigors of what might be expected on the battlefield. Of all the testing and all the cartridges fired under strain, the Owen design came out on top. As the Australian Army could not agree on the caliber for the Owen system, the government stepped in and decided on the 9x19mm Parabellum - a cartridge proven to work well for submachine gun type weapons and pistols within listed ranges. With history now set, the Owen weapon became known simply as the "Owen Submachine Gun" and formal acceptance into service occurred in 1940 as the "Owen Machine Carbine".
Advertisements

The Owen Submachine Gun sported a highly utilitarian appearance - certainly not the most beautiful firearm ever made. However, it was very functional, robust, reliable and required little training to operate with any level of effectiveness. The Owen was a simple weapon with simple construction, allowing for the mass production that the burgeoning Australian military required. Design was essentially a tubular, featureless receiver capped by a removable barrel assembly. The stock was skeletal to save on weight and construction material though some versions were also fitted with an all-wood stock and others with a "mutt" design featuring both wood and a metal frame. The lower portion of the receiver was "hollowed out" to which a simple pistol grip and trigger unit was affixed. The magazine feed was set across the forward upper end of the tubular receiver and fed by a vertical spring-loaded magazine (an early form utilized a drum-style magazine but this was later dropped in favor of a detachable box). This installation made for a very reliable feed mechanism for the cartridges therein were aided by both the magazine spring itself and gravity - the detachable box magazines fed 32 x 9mm cartridges in succession. There was a forward pistol grip for a firm two-point hold and this further showcased finger grooves for basic ergonomics. The barrel was rather nondescript and an early form showcased cooling fins at the base near the receiver though this design element was later dropped. Interestingly, the barrel was also designed to be "quick-changing" which prevented overheating under heavy sustained fire conditions - a design quality more akin to light machine guns than submachine guns. Sights were iron in their design and offset to the side of the receiver, this forced by the position of the vertical magazine. The firing action was the typical "blowback" system utilizing an open bolt. The internal compartmentalized arrangement of the receiver was such that it kept the integral components clear of debris that would have otherwise impeded the function. Overall, the Owen SMG weighed in at about 9lb and sported a 32 inch running length with a near-10 inch barrel assembly. Rate-of-fire was listed at 700 rounds per minute with a muzzle velocity of 1,380 feet per second and an effective range out to 135 yards.

Once accepted into service - and deliveries from Britain of Sten guns less likely - production of the Own SMG began out of the John Lysaght facilities and this was further bolstered by involvement of the Lithgow Small Arms Factory to which over 50,000 total examples were ultimately produced from a span of 1941 to 1945. The full production rate was limited to 2,000 units a month simply because the Australians lacked the facilities to produce more. The initial batches were hampered in their use for the promised ammunition supply was of the incorrect caliber. After logistics were settled, Australian soldiers could make effective use of their Owens against the Japanese, the weapon proving its inherent value across the often unforgiving nature of the jungle environment. The weapon was also seen in various camouflage paint schemes to reflect the fighting environment in question and some were also witnessed with short bayonets added alongside the barrels. The weapon was perfect for the close-range fighting required of Australian troops against the fanatical Japanese who often charged positions in suicidal actions. Additionally, special operations elements could utilize the more compact design in their clandestine missions or for scouting enemy positions prior to assault. Regardless of the abuses brought upon the Owen frame, the gun - more often times than not - refused to quit and earned her the nickname of "Digger's Darling". The gun could be dropped in rivers, lathered in mud and take on dust - only for its firing action to remain as new. In time, the forces of neighboring New Zealand were also using the weapon and the Owen gun even caught the interest of the United States, United Kingdom and the Netherlands. It is said that within the Australian Army, soldiers preferred nothing less than their homegrown Owen SMGs for, if the system held one fault, it was in her generally heavy overall weight that surpassing that of her contemporaries. However, a sure two-hand hold and use of the shoulder stock helped to alleviate such a fault.

All told, the Owen was produced in just two distinct forms - the basic model designated as the Mark 1 (1/42) and appearing in 1943 and the wooden butt model designated as the Mark 1 (1/43) appearing in 1943. The Mark 2 was to be a simplified production version but only appeared in prototype form by war's end. The US Army in Australia contracted for 60,000 Owen submachine guns themselves but the request was never fulfilled due to a lack of Australian machinery infrastructure and raw war materials.

With World War 2 coming to a close by September of 1945, the Owen SMG continued to soldier on in the post-war years. When full-scale fighting erupted on the Korean peninsula in the North invasion of the South, the Owen SMG went to war with Australian forces once more. In 1952, many Owens were completely rebuilt to help extend their service lives and a longer bayonet was added. Australian involvement in the Vietnam War also brought the Owen back into play, the old girl not a stranger to jungle warfare.

Amazingly, the "little submachine gun that could" survived her various global conflicts and served with Australian forces until the 1960s to which it was ultimately replaced by the F1 Submachine Gun series entering service in 1963. This weapon also saw service in the Vietnam War with Australian forces, utilized the 9x19 Parabellum cartridge, made use of a vertical magazine and served up until 1991.