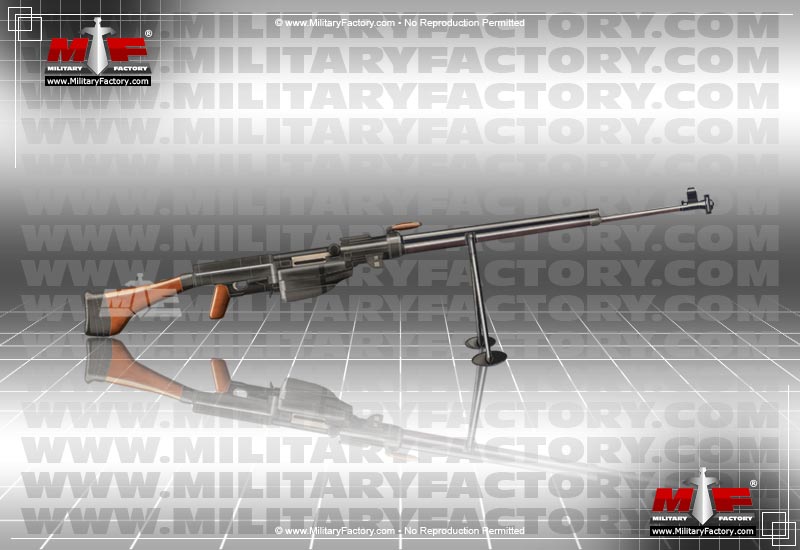 Simonov produced the PTRS-41 (or "PTRS 1941") anti-tank rifle for the Red Army during World War 2. While allied with Germany during their conquering of Poland in September of 1939, the two nations were at odds with one another after the German invasion of the Soviet Union in June of 1941. Soviet military industry was pressed to come up with every war-making device imaginable to try and stave off complete elimination from the invading German Army. One such need was for an anti-tank rifle to which Simonov and their PTRS-41 - and Degtyaryov with their PTRD-41 - delivered capable systems in 1941. While the PTRD-41 was the more numerous product available to the Red Army, the PTRS-41 was a respectable attempt that offered up some unique qualities to the former. The PTRD-41 was simpler and lighter, yet only fired a single round before required manual reloading. Conversely, the PTRS-41 was a heavier, longer and more complex (the latter due to its gas system) though fired from a self-loading, five-round clip-fed magazine. All of these factors ensured that the PTRD-41 would be available in lesser numbers to Soviet troops than the PTRD-41 due to mass production requirements during the whole of the war.

The PTRS-41 fired the same 14.5x114mm cartridge as the PTRD-41 but through a semi-automatic, gas-based operation. The cartridges were stacked in an overlapping fashion and fitted onto a base mount as a single-unit "clip" (as opposed to a conventional firearms "magazine"). A novel feature to help facilitate transport allowed the barrel of the PTRS-41 to be removed and carried as two separate components. However, the additions that made the PTRS-41 unique when compared to the PTRD-41 also went on to make for a more complex and temperamental system in the end - particularly the clip feed which was prone to jamming in the field.
Advertisements

The PTRS-41 was of a conventional layout as rifles go. There was a wooden buttstock at the rear behind the squared-off receiver. A pistol grip and trigger group hung underneath the receiver in traditional fashion. The clip feed was just ahead of the trigger group with the cocking handle set to the right side of the gun body. Shell casings ejected from an ejection port above the clip feed. A carrying handle was fitted ahead of the major working components and a long gas cylinder was mounted above the barrel component. A folding bipod was fitted just underneath the barrel and helped to control the aiming of this heavy weapons system. The barrel protruded a distance away from the gas cylinder and sported a forward post sight with a muzzle brake, the latter intended to help dissipate some of the violent recoil inherent in the firing of such a large caliber round. The self-loading, semi-automatic nature of the weapon allowed it to be fired repeatedly until all rounds of ammunition were spent from the clip.

The PTRS-41 measured in at over 86 inches with its barrel measuring 48 inches in length. Muzzle velocity was an impressive 3,3230 feet per second and armor penetration up to 25mm could be attained from out to 500 meters (when 0-degree sloped).

Like the PTRD-41, the PTRS-41 arrived on the battlefield at a time when German armor protection was an ever-increasing prospect - thusly rendering such anti-tank rifle systems somewhat limited in their usefulness. Regardless, these weapon systems could still prove reliable against softer-skinned enemy vehicles and tanks to which the weapon could be aimed at critical components such as softer rear areas (where engines were typically mounted), driver vision blocks and tracks. Additionally, the PTRS-41 proved handy in house-to-house fighting where its penetrative capabilities could be used to advantage. Despite the growing limitations, the PTRS-41 was fielded throughout the war into 1945. Like other captured Soviet weapons, the Germans put the still-useful PTRS-41 into their own service under the designation of 14.5mm Panzerabwehrbuchse 784(r) but used them only up to 1943.

The PTRS-41 survived the war and appeared in the Korean War under the North Korean and Chinese banners.