With help from the Soviets, the Gew 43 improved upon the Gew 41 but was never the semi-automatic rifle envisioned by the German Army. 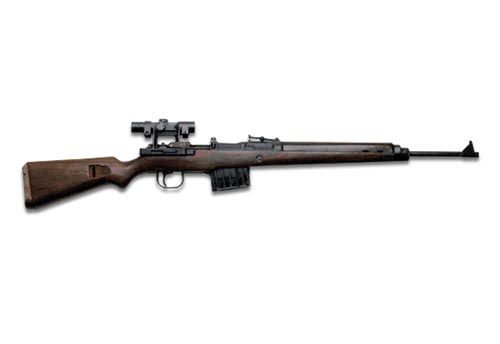 The Gewehr 43 (Gew 43) became the next evolution of the Walther Gew 41(W) of 1941 - a self-loading, semi-automatic rifle that failed to see require production numbers to make a proper wartime impression. In 1940, the Germans enacted a program to deliver a standard semi-automatic rifle to their infantry ranks to help improve their outmoded bolt-action rifle units. The British, Americans, and Soviets were already issuing such weapons to their troops leaving the Germans with little choice. However, the Gew 41(W) proved too expensive for wartime mass production, relied on a complex gas system prone to fouling, and was difficult to reload due to its fixed magazine approach (fed by a pair of clips).

Eventually finding themselves against the Soviet Army and their Tokarev automatic rifles, the Germans evaluated and dissected the gas-operation system (that tapped gasses from the barrel) to feed an automatic action. Conversely, the Gew 41(W) was designed with a complicated muzzle-based gas actuated system of operation which made the gun "muzzle-heavy" and unnecessarily temperamental. With the foreign technology in hand, Walther set to work on an improved form of the Gew 41(W) and ultimately delivered the Gew 43 in 1943. In something of an ode to its enemy designers, the original Soviet gas system of the production Gew 43 remained largely intact.

While outwardly similar to the Gew 41, the Gew 43 fielded a number of improvements over its predecessor. The bolt locking system of the former was retained but the aforementioned gas system itself was of an all-new design. Additionally, the 10-round magazine was now made as a detachable box though still utilizing the 7.92x57mm Mauser cartridge - the same as used in the standard-issue German Army Mauser Karabiner Kar 98 service rifle. A sight mount was directly machined onto the receiver for the fitting of an optional Zf42 series optical crosshair scope for precision shooting at range.

With production ramped up, the Gew 43 was delivered into the hands of German soldiers by the end of 1943 and placed into action immediately against Red Army foes. From there, the line would go on to see combat elsewhere in the war though, owing to limited availability, it tended to be found mostly with German special units. The appearance of the Gew 43 led to the stoppage of all production on the preceding Gew 41 series but the Gew 41 still saw operational use beyond 1943 - such was the dire state of the German Army towards the end of the war that any automatic weapon was better than none. German troops lucky enough to handle the newer Gew 43 ultimately respected its inherent power and rugged man-stopping, self-loading qualities but the series often lacked when compared to her contemporaries of the day.
Advertisements

The powerful 7.92x57mm Mauser rifle cartridge, when coupled with a scoped Gew 43, made for an effective sniper weapon system. The weapon's self-loading action worked well as the operator did not need to operate a manual bolt mechanism to ready the next cartridge - he could simply could keep scanning the battlefield for available targets and fire repeatedly until his magazine ammunition supply was spent. The optical sighting scope was fitted to the upper rear of the receiver's end along two support points and all Gew 43 sniper rifles for the German Army were issued (when possible) in this simple modified fashion.

At any regard, the Gew 43 surpassed the original Gew 41. Attempts were constantly being made to simplify the production process with plastic, and even laminated wood, used in the furniture to replace valuable materials needed elsewhere in the German war effort. The latter months of the war saw Gew 43s leaving factories with some rather crude finishes due to haste. In 1944, the "Karabiner 43" was even brought online as a more simple form of the base Gew 43 design. Though designated as a carbine in name, the Karabiner 43 was only shorter than the original by some 2 inches to help make her a more portable weapon system. This version was further differentiated by its larger trigger guard.

When the war in Europe concluded in May of 1945, production of the Gew 43 still continued to some extent thereafter. The Czech Army became a notable post-war operator, admiring the system's usefulness particularly in the sniper role. In all, 402,713 Gew 43 rifles were produced - seemingly a large amount but a figure that did not truly reflect complete success for the gun. Comparatively, the American war-winning M1 Garand self-loading rifle saw production figures reach 6 million and even the Soviets managed 1.6 million units of their Tokarev SVT-40 semi-automatic rifles. With that said, at least fifty Garands were produced for every one Gew 43.
Advertisements 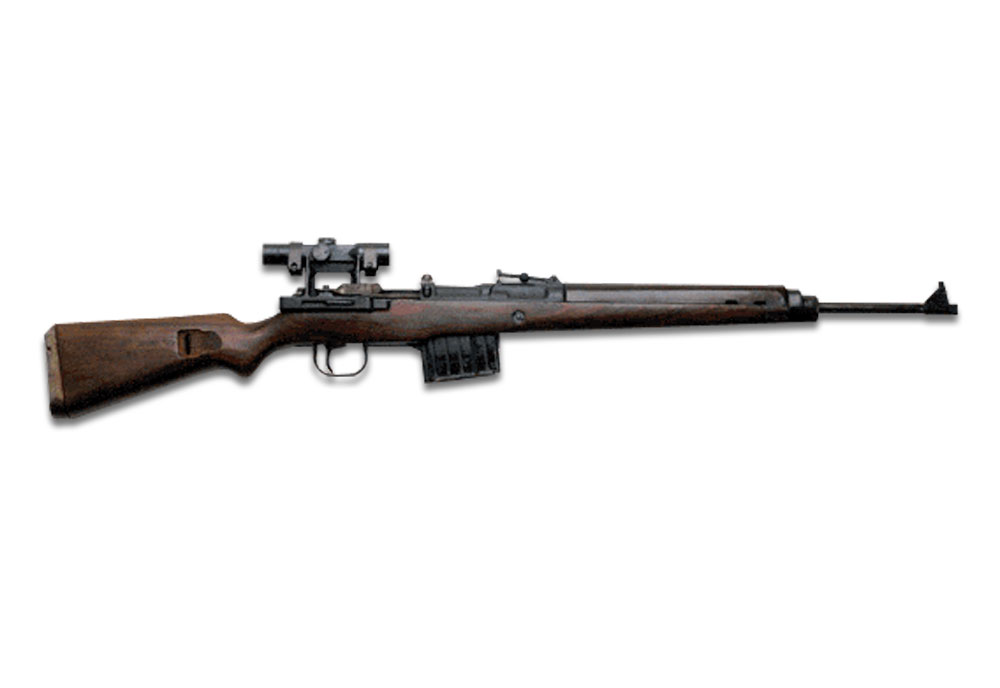 Right side view of the Gew 43 semi-automatic rifle in its sniper form; color.
2 / 3 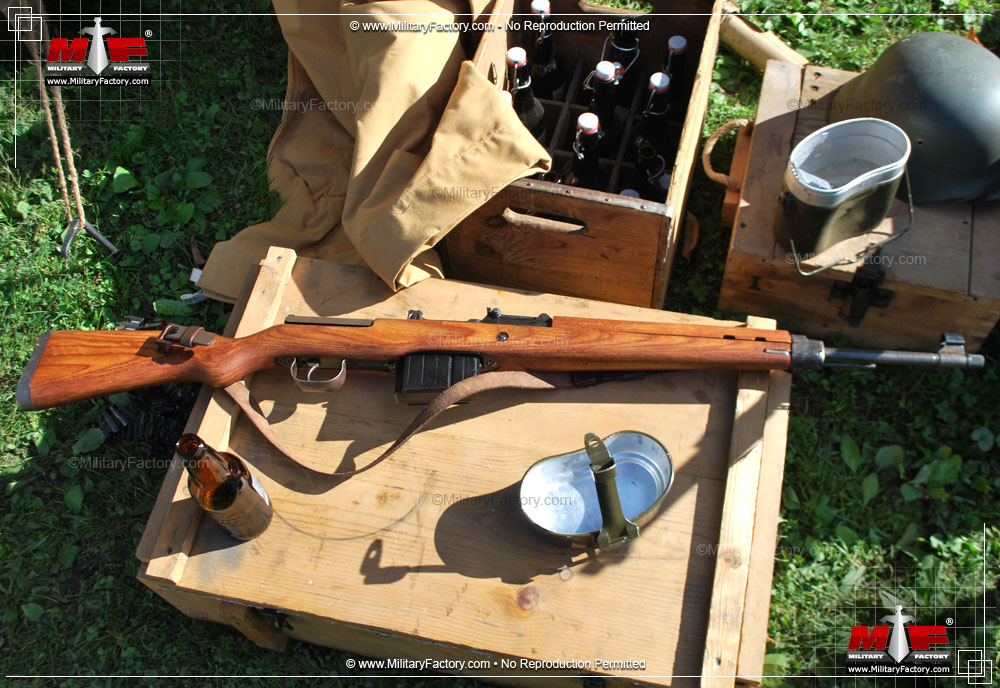 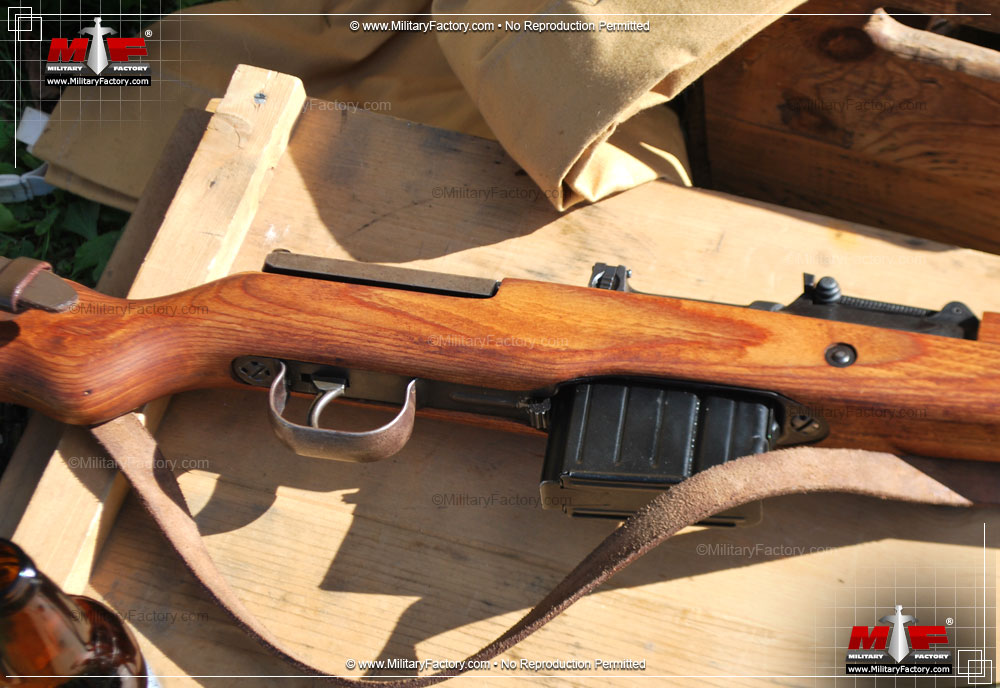