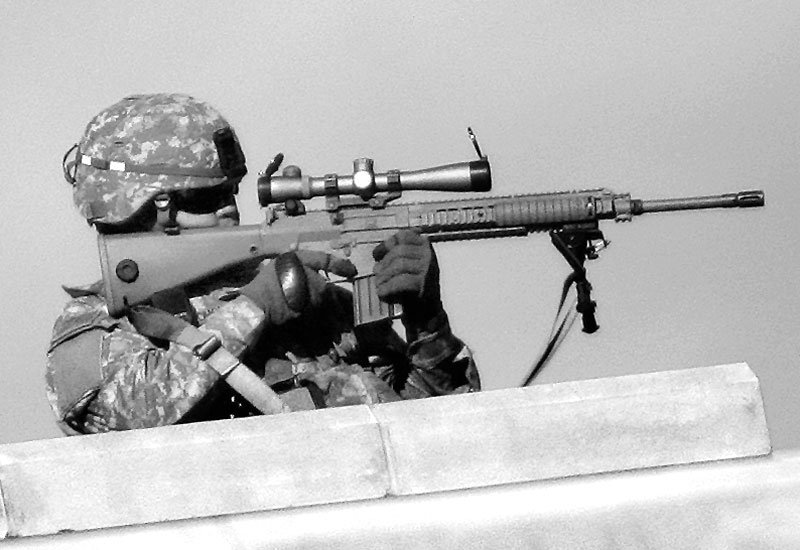 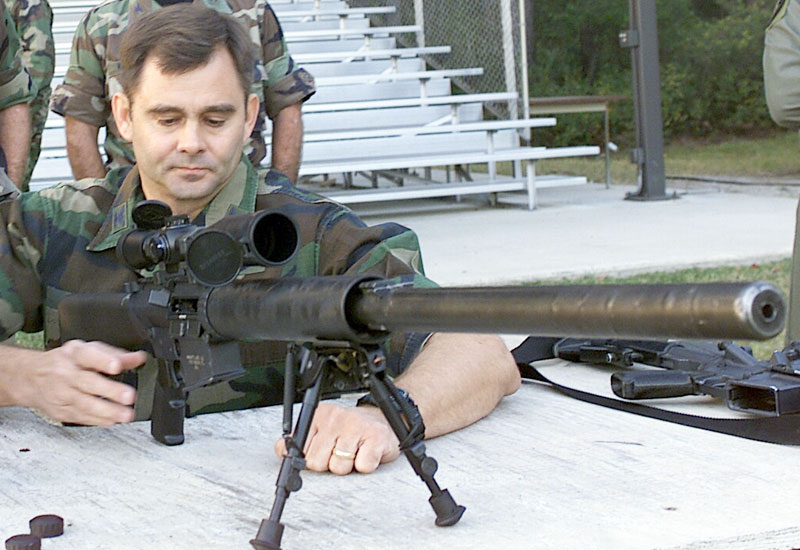 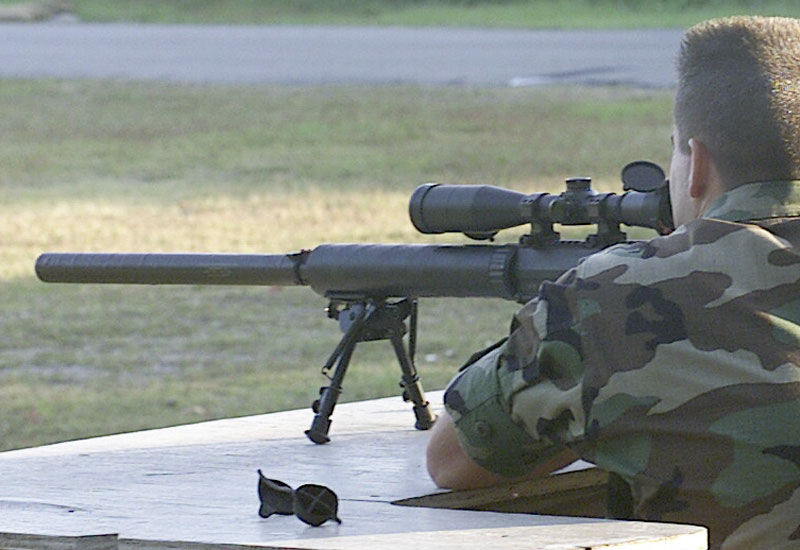 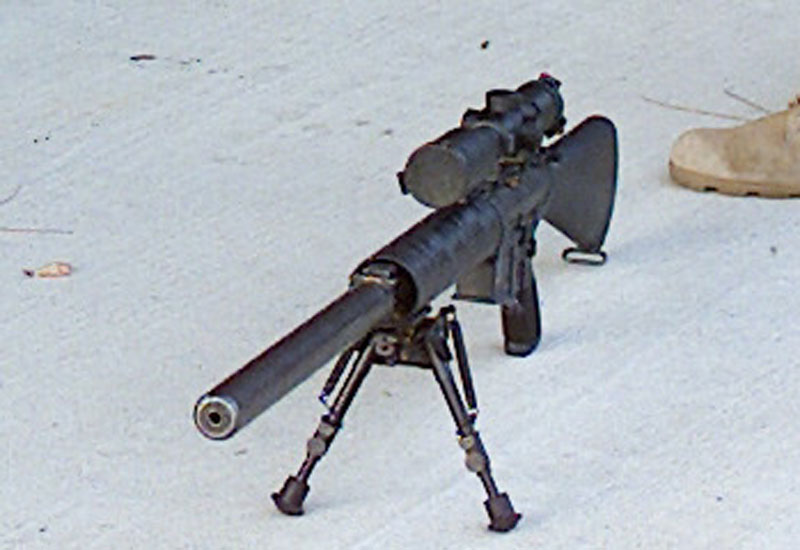 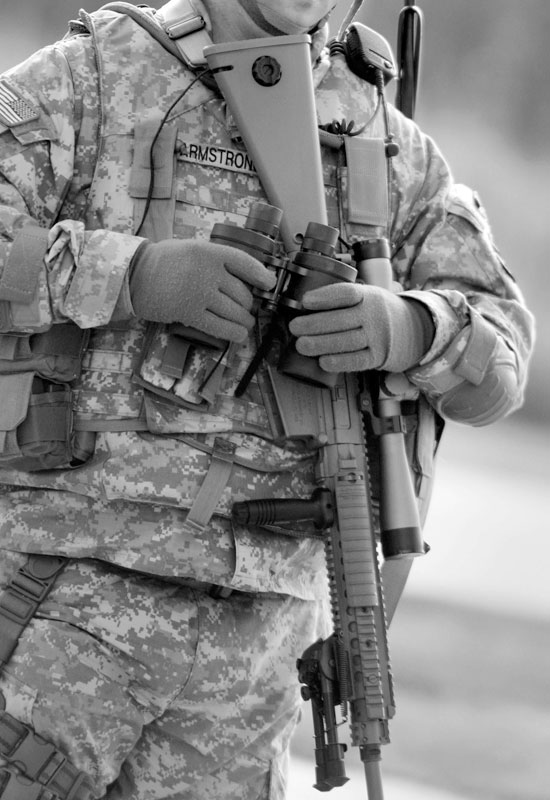 Authored By: Staff Writer | Last Edited: 02/15/2019 | Content ©www.MilitaryFactory.com | The following text is exclusive to this site.
The SR-25 Enhanced Match rifle (EM) was a semi-automatic sharpshooter / sniper rifle system developed within the United States during the late 1980s. Production ensued in 1990 to which the weapon was formally adopted for service in the US military followed by other allied nations. While currently seeing frontline service, the SR-25 is steadily being replaced in some circles by newer more modern types now entering service. To date, the SR-25 has seen extensive combat actions in and around Afghanistan, Iraq, East Timor and the Gaza Strip. Key global operators of the weapon type (beyond the US) include Australia, Greece, Israel, Poland and Thailand.

The stellar M21 sniper rifle of 1969 proved during the Vietnam War the value of long-range firepower time and again. It was a semi-automatic system utilizing the 7.62x51mm NATO cartridge from a 5-, 10- or 20-rond detachable box magazine reaching out to ranges in excess of 900 yards. The M21 was, in essence, an evolution of the M14 semi-automatic service rifle which, itself, was a development of the war-winning World War 2-era M1 Garand self-loading rifle. The M21 was progressively updated to the M25 system which saw combat service in the Gulf War of 1991.

By the 1990s, attention was given to developing a similar system for the modern military. To keep development and production costs at a minimum, the Armalite AR-10 (chambered for the 7.62x51mm NATO) was selected for modification. The AR-10 entered service in 1955 but only saw limited service, production ceasing a short time later in 1966 with some 10,000 units completed. Eugene Stoner - designer of the AR line as well as the M16 - took the helm in the new rifle's development. The identifiable carrying handle so prevalent in the AR and M-16 series of automatic weapons was removed and an accessories rail system was fitted instead. This would allow for the installation of various specialized optics and the like. Additional rails were adapted to the top and bottom of the forend and silencer could be affixed to the barrel muzzle. The barrel was "free-floating" in the design to allow for maximum precision at range and an optional folding bipod could be affixed. The resulting design became known as the "SR-25" ("Stoner Rifle-25") with arrangement to be handled by the Knight's Armament Company.

Overall, the SR-25 retained much of the form and function of the original AR pattern including up to 60% commonality of parts with the AR-15 and M-16 - which made it an excellent economical investment. It was chambered to fire the rifle-caliber 7.62x51mm NATO cartridge from a 10- or 20-round detachable box magazine through a semi-automatic action (one cartridge fired for each trigger pull). The firing action centered around the conventional gas-operated, rotating bolt system consistent with the original AR it was derived from. The rifle sported an overall length of 46.25 inches with a 20 inch barrel assembly. Overall unloaded weight was 9.75lbs.

The SR-25's primary marketed form today is the "Mk 11 Mod 0". There is also an "SR-25 Enhanced Match (EM) Carbine form" which is shorter in length.

Australia; Greece; Israel; Italy; Malaysia; Philippines; Poland; Thailand; United States
(OPERATORS list includes past, present, and future operators when applicable)
✓ Accuracy / Precision
Long-range accuracy / precision capable; suitable for sniping, particularly when equipped with sighting aids. ✓ Special Forces
Qualities of this weapon have shown its value to Special Forces elements requiring a versatile, reliable solution for the rigors of special assignments. ✓ Silenced
This weapon is either inherently silent/suppressed or can be made so through special assembly added at the muzzle, specialized subsonic ammunition or a combination of both.


10- or 20-round detachable box magazine

*May not represent an exhuastive list; calibers are model-specific dependent, always consult official manufacturer sources.
**Graphics not to actual size; not all cartridges may be represented visually; graphics intended for general reference only.