Authored By: Staff Writer | Last Edited: 02/04/2019 | Content ©www.MilitaryFactory.com | The following text is exclusive to this site. 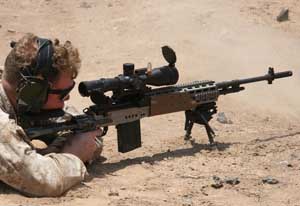 The Mk 14 Mod 0 EBR (Enhanced Battle Rifle) is an evolution of the original M14 Battle Rifle of the 1960s and 1970s and has since been adapted to provide infantry squads with the firepower of a semi-automatic weapon with the range and accuracy of a sniper rifle in an effort to engage targets out of the range of the standard M4 Carbine and M16 assault rifle. Manufacturing of the Mk 14 EBR is handled by the Rock Island Arsenal to the requirement as specified by the Operational Need Statements for a long range rifle to serve within the standard US infantry platoon. The Mk 14 is classified as a "Designated Marksman Rife" (DMR) for use by Designated Marksmen (DM).

Designated Marksman is a term utilized by the United States Army to signify a soldier element that actively operates as part of the infantry-level platoon and is called upon to supply precise long range shooting as well as accurate rapid fire. In essence, the DM is something of an amalgamation of the dedicated sharpshooter class of soldier and the standard infantryman squad member though the sniper remains a very distinct, specialized and select soldier in his/her own right. Another differentiating feature between the DM and a true "sniper" is in the use of a semi-automatic weapon (usually a scoped Battle Rifle or Assault Rifle) that is further classified in military nomenclature as a "Designated Marksman Rifle" (DMR) and is equipped with a specialized sight for long range accuracy. DMs are charged with engaging enemy targets within 600 yards utilizing standard-issue rifle ammunition and improve upon the inherent range limitations presented by the M14 Carbine and M16 assault rifle - broadening the reach of a given infantry platoon in much the same way a squad machine gunner or grenadier does. In contrast, snipers typically operate in small two man teams incorporating a spotter and undertake missions specifically utilizing their very select skill set, equipment and training and are called to tackle high-value targets at ranges of 600- to over 2,000-yards with larger-caliber ammunition.

The Mk 14 EBR was born in 2000 from a US Navy SEALs need for a revised version of their highly-valued and effective M14 Battle Rifle. In response, the United States Special Operations Command asked Mike Rock Rifle Barrels, Incorporated to deliver a new M14 with an aluminum receiver, collapsible stock and support for accessory rails. The resulting product was promising but excessive noise issues doomed it to history. Jumping into the fray in 2003, Smith Enterprises, Incorporated delivered the "Mk 14 SEI Mod 0" that surpassed the original submittal to which Smith Enterprises entered into a joint effort with Springfield Armory, Incorporated to deliver operational forms of their new "Mark 14 Mod 0" to the United States military. Both firms work with the Naval Surface Warfare Center Crane Division and Sage International has been contracted to supply the stocks.
Advertisements

Beginning in 2004, US Navy SEALs officially began select operations with their new Mark 14 Mod 0 (Mk 14 Mod 0). The rifle system was eventually delivered into the inventory of the US Coast Guard and is currently being introduced by the US Army into select infantry squads. Up to the middle of 2010, at least 5,000 Mk 14 EBR systems were generated out of TACOM Lifecycle Management Command (LCMC) at the Rock Island Arsenal. As of this writing, these systems are in operational service with US Army forces operating in Afghanistan in support of Operation Enduring Freedom with two Mk 14 EBRs issued to each infantry squad. In practice, the Mk 14 EBR has proven to be an effective and highly modular system that supplies a low, contained recoil force when fired. Additionally, its conversion from existing M14 Battle Rifles ensures that procurement costs are kept to manageable levels.

At its core, the Mk 14 EBR is nothing more than a very modernized M14 Battle Rifle utilizing the same gas-operated/rotating bolt action of the original M14 as well as their air-cooled barrels. However, changes to the base system include an aluminum billet adjustable telescoping buttstock (complete with cheek rest), an M4-style pistol grip, cantilever mount, Harris-brand bipod, 4 x Picatinny accessory rails, a revised muzzle brake and a revised forward sight. A Mark 4 tactical scope is utilized for accurized work. Keeping its original Battle Rifle lineage intact, the Mk 14 EBR can be used for both Close-Quarters Combat (CQC) and long-range distance precision work. Despite the changes to the base M14 design, it is said that Mk 14 EBRs can be reverted back to their original M14 Battle Rifle forms if need be.

The Mk 14 EBR is chambered for the 7.62x51mm NATO cartridge and operates in a semi-automatic nature. The effective listed range is between 600- and 800-yards depending on conditions and operator training/experience. The weight of the firearm when empty is listed at 14.9lbs with a loaded weight of 16.6lbs and the magazine is a detachable box type offering 20 rounds of ready to fire ammunition. Muzzle velocity is reported at 2,600 feet per second while barrel length (utilizing original M14 barrels) measures in at 22 inches with an overall system length of 35 inches.

Externally, the Mk 14 EBR only retains some of the general appearance of the original M14 as new revisions abound - though the true M14 fan will be quick to point out some visual similarities. The most obvious is in the installation of the adjustable stock and pistol grip. Picatinny rails are set above the receiver and around the forend/barrel region, these capable of taking on various accessories including scopes (day/night types - even two different types at once), vertical handgrips, bipods and the like. The barrel extends a ways from the forend housing and features a baffled muzzle brake.

The United States Marine Corps entertained fielding the Mk 14 EBR but elected instead to further the development of their M39 EMR (Enhanced Marksman Rifle).
Advertisements 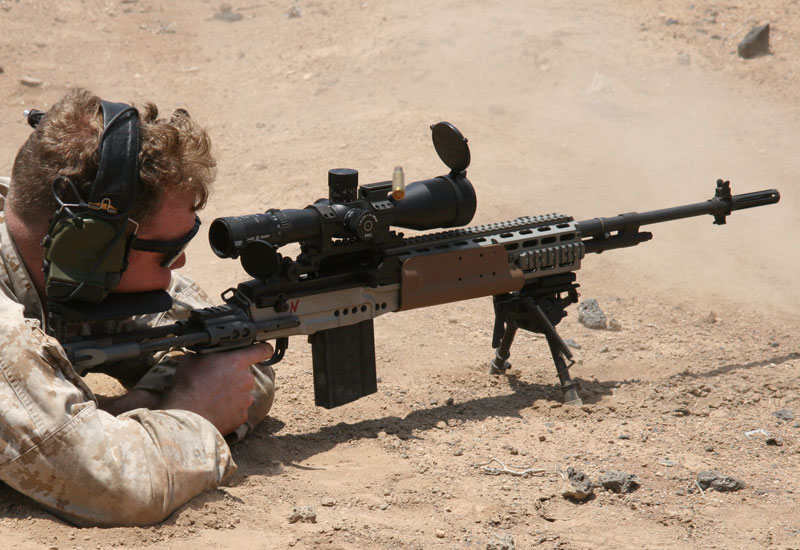 Image from the United States Department of Defense image database.
2 / 8 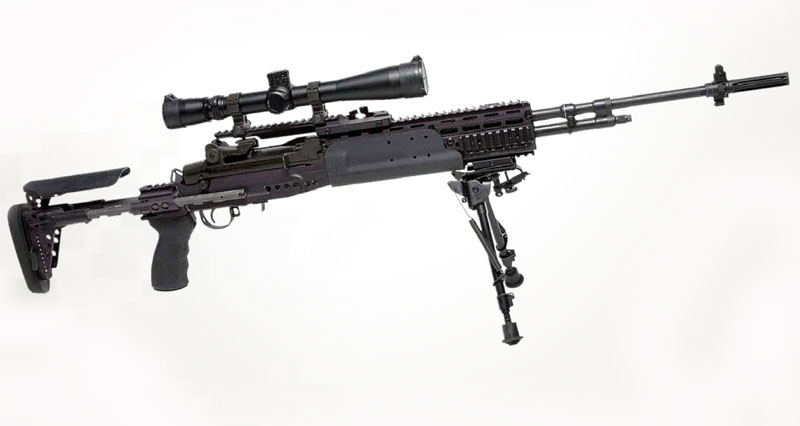 Image from the United States Department of Defense image database.
3 / 8 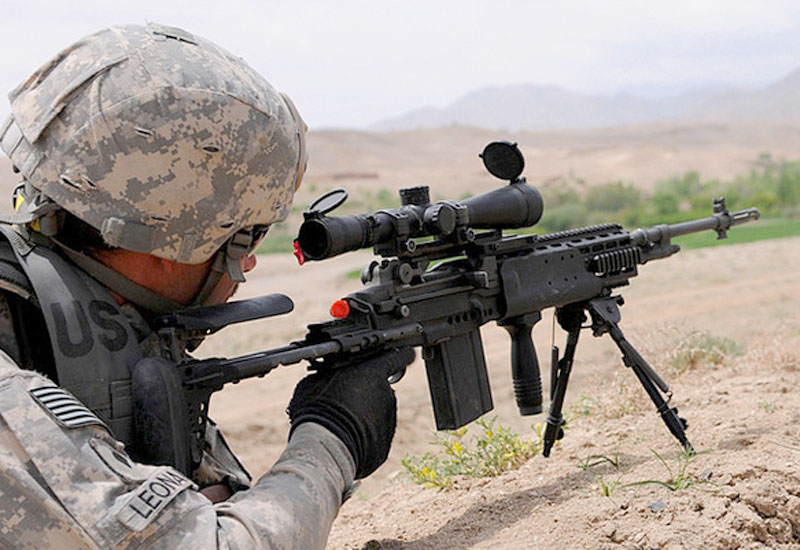 Image from the United States Department of Defense image database.
4 / 8

Image from the United States Department of Defense image database.
5 / 8 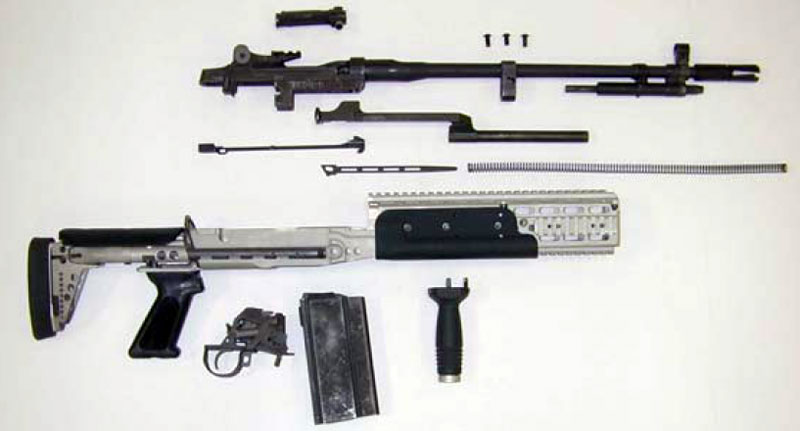 Image from the United States Department of Defense image database.
6 / 8

Image from the United States Department of Defense image database.
7 / 8 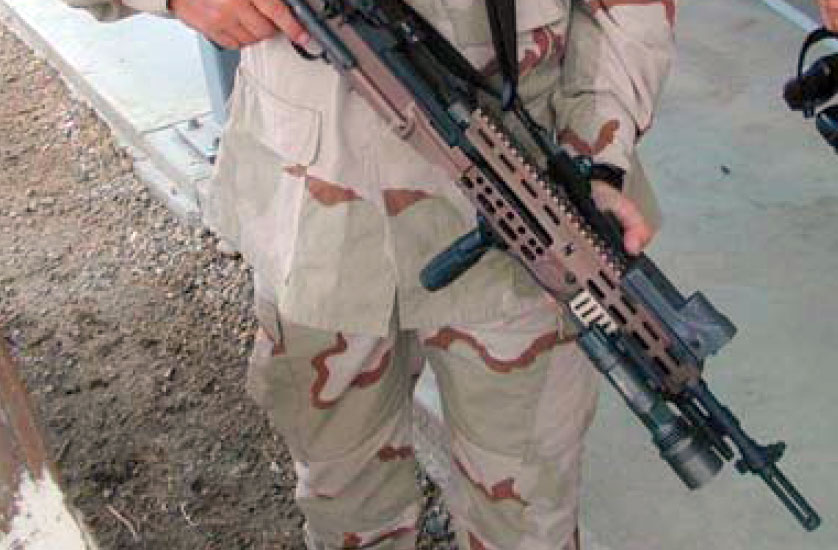 Image from the United States Department of Defense image database.
8 / 8