The Walther WA2000 was billed as an ultimate sniping tool though only ever taken on by select West German police units.

Authored By: Staff Writer | Last Edited: 05/15/2019 | Content ©www.MilitaryFactory.com | The following text is exclusive to this site. 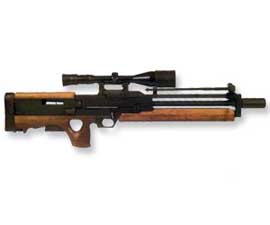 Following the 1972 Munich Olympic games which ended in the deaths of eleven Israeli participants and a German police officer at the hands of Black September Arab extremists, the Carl Walther GmbH Sportwaffen concern set to work on a new precision sniper rifle aimed at the special police unit market. The effort eventually produced the WA2000 model sniper rifle which, for its time, was billed as one of the most accurate (if not THE most accurate) sniper rifles anywhere in the world. Indeed it was nicknamed the "Cadillac of Sniper Rifles" during its heyday. The Walther gun was well-crafted and engineered to a high standard which, in turn, made it extremely expensive to produce, maintain and procure in number. It was never truly a military-minded weapon at its core and ended up seeing very limited exposure. In the end, only German police units ever took on the type and production totaled just 176 units from production spanning 1982 to 1988.

The key component to the WA2000 was its finely-tuned barrel to which the rest of the weapon was designed around. A bullpup configuration was chosen which set the action aft of the (adjustable) trigger group and allowed a full-length, rifled barrel to be used across a more compact overall length. The bullpup arrangement also aided in recoil as the forces were directed rearwards into the firer's shoulder along a more singular, concentrated line. As such, muzzle climb was minimized and accuracy maintained with a successive shot if needed. The barrel only touched the body of the weapon at the front and rear and lay exposed across most of its length in the design - termed a "free-floating" barrel which also aided accuracy and precision. The weapon fired through a gas-operated system utilizing a rotating bolt function which allowed for a semi-automatic action to be achieved. In this way, the WA2000 was more akin to a modern-day Designated Marksman Rifle (DMR) than "true" sniper weapon which generally makes use of a manual bolt-action facility - though the WA2000 was hardly a direct-assault weapon as a DMR can become.

The WA2000 also featured a thumbhole pistol grip (of which the entire component could be released for cleaning), an adjustable rubber buttstock for customization (as well as adjustable cheekpiece), and stabilized feed system which prevented movement of the ammunition when the gun was fired. Various scopes could be fitted to the receiver though a standard Schmidt & bender series 2.5-10x56mm telescopic sight was more than sufficient for the ranges involved. There were no backup iron sights which is typical with a precision weapon. A flash suppressor, designed specifically for the fired cartridge (.300 Winchester Magnum), was used on the muzzle and a collapsible bipod was integrated into the forward portion of the frame. Beyond the standard .300 Winchester Magnum cartridge, other calibers were eventually supported: 7.62x51mm NATO and 7.5x55mm Swiss. Feeding was by way of a detachable box magazine which contained six rounds of ammunition. The magazine was inserted into a well just aft of the pistol grip base.

No world military ever took on the WA2000 into inventory which severely hurt its long-term availability. Additionally, many budget-minded police forces took on less expensive sniper offerings, bringing about a quiet end for such an exceptional rifle system.
Advertisements


Optics as Standard; No Iron.

*May not represent an exhuastive list; calibers are model-specific dependent, always consult official manufacturer sources.
**Graphics not to actual size; not all cartridges may be represented visually; graphics intended for general reference only.
Max Eff.Range
2,297 ft
(700 m | 766 yd) 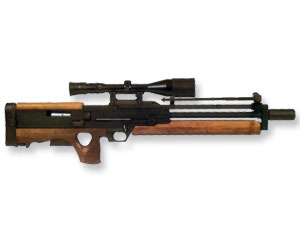