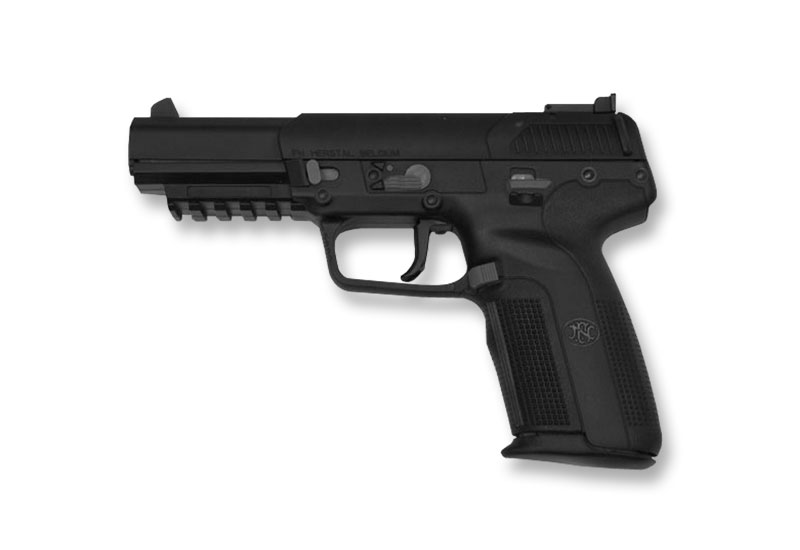 The Fabrique Nationale FN Five-SeveN receives its rather unique name from the caliber of its ammunition - 5.7x28mm.

The Fabrique Nationale FN Five-seveN is a self-cocking, semi-automatic pistol that has seen service in military, security and civilian markets. The system lays claim to be able to counter the protective effects of Kevlar armor that an enemy or criminal might have access to. This is partly due to the pistol making use of FN's own unique 5.7mm cartridge (hence the pistol's name) and can take on a variety of magazine counts and attachable accessories (including tactical lights and sound suppressors). The high-velocity 5.7mm cartridge allows for excellent penetration and ranges.

What makes the Five-seveN unique in the realm of pistols is its use of the 5.7x28mm cartridge. The cartridge was designed and developed by Fabrique Nationale during the design and development of the FN Five-seveN pistol and the FN P90 submachine gun - both sharing this same cartridge type. The new cartridge would serve its weapons well by allowing for higher ammunition counts (due to its decreased weight) and less recoil (which would theoretically improve an operator's accuracy). In its original 1980s form, the cartridge was known as the SS90 but refinements in its design led to the newer SS190 designation appearing in 1994. The military-based SS190 appeared as a slightly heavier and shorter cartridge than its predecessor and intended for use against Kevlar-based protection. Despite the changes apparent to the SS190, this 5.7x28mm cartridge still weighed in at half of a standard 9x19 Parabellum type popular with other pistols. It should be noted that the 5.7mm cartridge is longer than that of typical pistol rounds, leading to a wider magazine and pistol grip - though this is said to still fit the hand well.

The FN Five-seveN operates from a delayed blowback operation principle and is fed from a 10-, 20- or 30-round detachable box magazine. The 20-round magazine is standard while the 10-round magazine is offered where a high-capacity magazine is illegal. The 30-round magazine is identifiable when inserted into the Five-seveN for it extends past the base of the pistol grip by almost 2 inches. The pistol grip also serves to warn the operator of the ammunition count remaining via use of four vision holes. The pistol itself weighs in at a relatively light 4.4lbs and has featured both adjustable and fixed sights during its production run - with the rear being of a square-notched variety along paired to a vertical front post. Muzzle velocity is listed at 2,133 feet per second and varies based on ammunition type. Effective range is out to 55 yards (variables notwithstanding). The Five-seveN can be field-stripped into four major components made up by the slide, lug, grip and magazine. Construction is mostly of polymers though of note is the steel slide covered over in polymer.

The Five-seveN has been marketed in at least four distinct forms with the first three models no longer being offered. The initial model became the base Five-seveN and sported a double-action only trigger. There was no manual safety catch incorporated into its design (this was controlled by the trigger action on the firing pin) and sights were fixed. The Five-seveN Tactical was based on the initial model but fitted a single-action trigger and a manual safety of ambidextrous nature. The third production model was the Five-seveN IOM ("Individual Officer Model") which became the first civilian market model. The M1913 accessory rail was introduced as were adjustable sights. A magazine safety system was integrated into the design to only allow firing when a magazine was inserted into the pistol. The IOM model was replaced by the USG model beginning in 2005.

The current production model of the FN Five-seveN is the Five-seveN USG ("United States Government"). The trigger guard has been reworked and a larger magazine release has been incorporated. The grip pattern is noticeably different. From 2009 and onwards, the USG version has fielded fixed sights.

As of this writing, operators of the FN Five-seveN include a variety of police, security, military and special forces groups of Argentina, Belgium, Canada, Cyprus, France, Greece, India, Indonesia, Libya, Mexico, Peru, Poland, Singapore and the United States of America. For the United States, the US Secret Service is one of the security elements that utilize the unique FN Five-seveN.

The Five-seveN has been the target of several arms issues well related to the guns capabilities and its special ammunition. Attempts at regulating its availability in the United States, for the most part, have failed.

It is reported that an FN Five-seveN was used by US Army Major Nidal Malik Hasan in his rampage at Fort Hood, Texas, leading to the murder of 13 people (one pregnant) and injuring 30 more.

Production of the Five-seveN began in 1998 under the FN Herstal brand label.

Semi-Automatic
One shot per trigger pull; self-loading or auto-loading action aided by internal mechanism; trigger management (and initial cocking) typically required by the operator; subsequent shots are aided by the unlocked / moved bolt. Blowback Operation
Gas pressure from the rearward movement of the ignited cartridge case provides the needed bolt movement, ejecting the spent case and stripping a fresh case from the magazine. (Material presented above is for historical and entertainment value and should not be construed as usable for hardware restoration, maintenance, or general operation - always consult official manufacturer sources for such information)