The ferocious General Electric M134 Minigun has been used to good effect as a vehicle weapon firing from either land, sea, or air platforms. 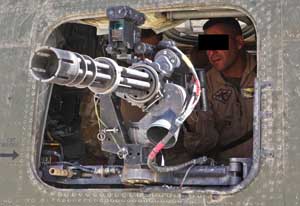 The vehicle-mounted General Electric M134 "Minigun" was born as a derivative of the 20mm General Electric M61 aircraft gun, retaining the same six-barreled Gatling design concept while being rechambered for the 7.62x51mm NATO cartridge. This ferocious weapon has gone on to have a lengthy service life, seeing combat action during the Vietnam War (1955-1975) with American forces and in the global wars that followed. Despite its 1960s origins, the M134 continues in service through a large stable of operators today (2015).

The concept of rotating barrels for (barrel cooling and to achieve a high rate-of-fire) was far from a new approach with the introduction of the M134. The approach pioneered by Dr. Richard Gatling's original attempts of the 1800s has been evolved through various designs though all follow the core concept - multiple rotating barrels with an external mechanism for rotation. Early forms included a manual hand-cranked action while more modern offerings have since relied upon electric drive assistance.

The modern American Army began to look into a new "suppression" weapon based on its early Vietnam War experience where its lightly-armored, highly vulnerable transport helicopters were fodder for well-hidden enemy ground forces. General Electric threw its hat into the ring for development of such a weapon and began by exploring its existing 20mm M61 "Vulcan" aircraft gun as a possible solution though in a much more compact body. The resultant weapon was essentially a dimensionally smaller product and chambered for the ubiquitous 7.62x51mm NATO rifle cartridge. The developmental "XM134" ultimately became the "M134" in U.S. Army service while the USAF knew it as the GAU-2/A and GAU-17/A (the USN used the "Mk 25 Mod 0" designator). Original versions held a rate-of-fire of 6,000 rounds per minute but this rate was scaled back to 4,000 rpm (and now variable between 2,000rpm and 6,000rpm) for greater accuracy and ammunition control. Due to the drive power required of the weapon an external powerpack is a standard component of the weapon system, restricting the weapon to vehicle-mounted use such as in aircraft, on a ground vehicle or installed on a watercraft. Hollywood's take on the gun has many believing these are man-portable battlefield weapons requiring no outside / fixed power supply(!)

After the war, the weapon began to see a reduction in numbers. Dillon Aero (USA) took to refurbishing some used systems and streamlined the overall design which improved the product considerably over time and resulted in the "M134D" mark. A titanium housing was introduced as a weight-saving measure and this begat the "M134D-T" designation as well as the "M134D-H" hybrid product. Modernized forms eventually rekindled U.S. military interest in the weapon and service branches began restocking various vehicles with the weapon. Garwood Industries also moved on an improved M134 (with inherent optics support) and this begat the "M134G".

Ammunition for the M134 is in a belt-fed form originating from an ammunition box. The ammunition is held in a linked belt format in which the firing action strips the cartridge from the belt and fires the round through the available barrel and ejects both casing and link belt components in turn. The completion of the cycle brings the next barrel in line with the chamber to repeat the process. Each barrel is consecutively fed in this fashion which helps to produce the impressively high volume of fire identified with this type of weapon system. "Cook off" (that is accidental discharge of cartridges due to heat) is controlled by design: once the trigger is depressed, the feed is automatically shut off from the bolt and barrel assembly - keeping fresh ammunition from being brought into play while the spinning barrels come to full rest. The action uses an electrically-driven rotary breech system. Muzzle velocity reaches 2,800 feet per second with a maximum range out to 3,280 feet.

For a short time, the XM214 "Microgun" appeared for possible wide-scale procurement. This weapon, introduced in 1966, was further scaled down by General Electric and chambered for the 5.56x45mm cartridge - the same as used in the M16 Assault Rifle. The XM124 did not see a long service life.

The M134 has gone on to see service beyond the United States military - adopted by such forces as Australia, Brazil, France, Israel, Mexico, Poland, Spain, Turkey, Pakistan and the United Kingdom among others. The Soviet Union / Russia has relied on a four-barreled, gas-operated, air-cooled weapon designated as the "GShG-7.62" which was introduced in 1970 - this is the equivalent of the American-originated M134.©MilitaryFactory.com
Advertisements 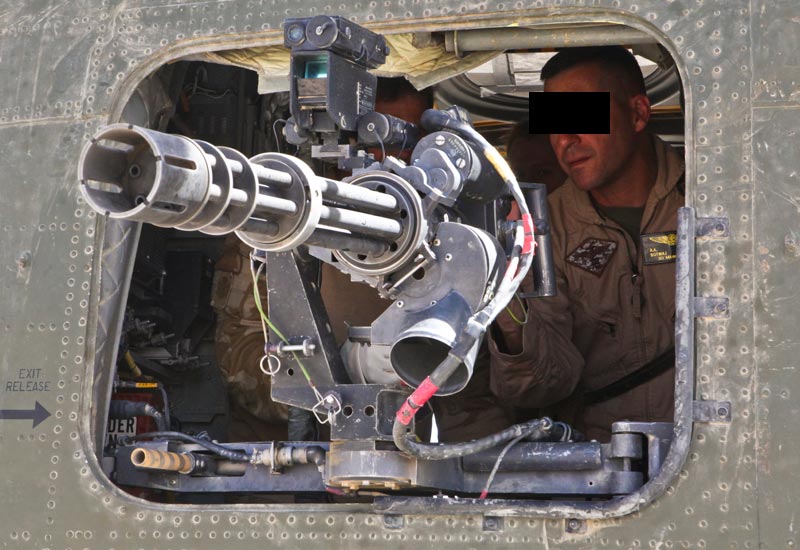 Image from the United States Department of Defense DVIDS network.
2 / 4 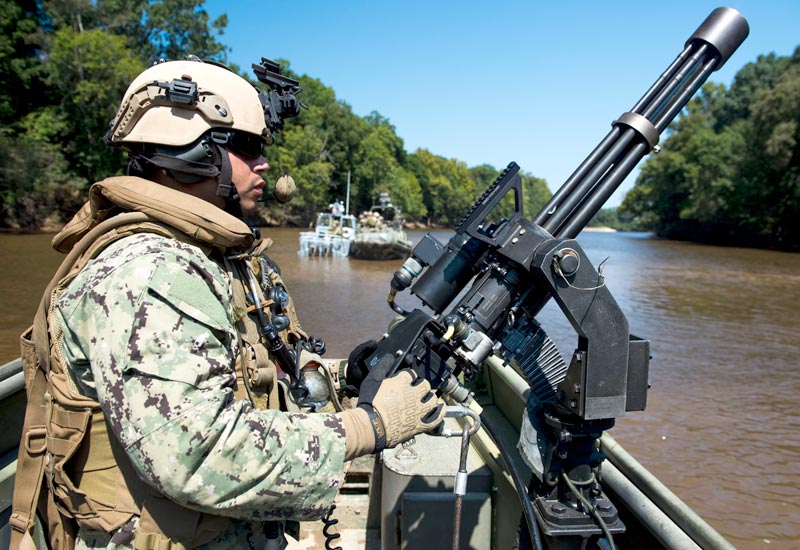 Image from the United States Department of Defense DVIDS network.
3 / 4 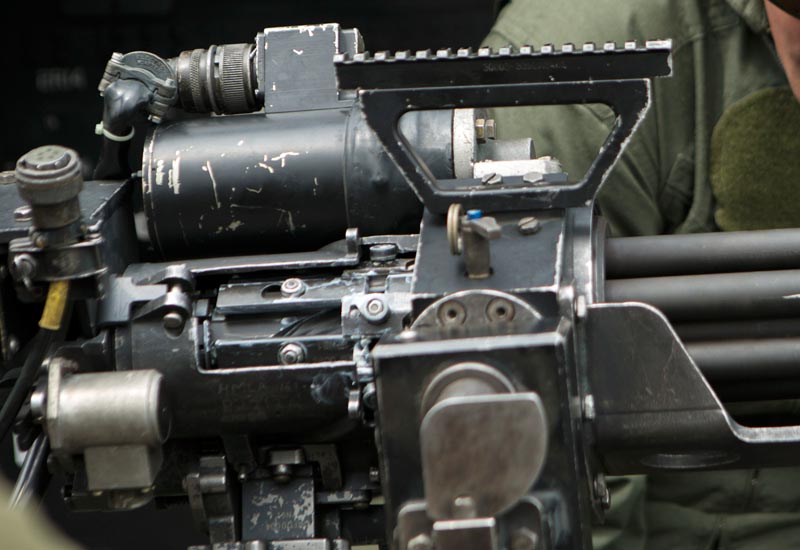 Image from the United States Department of Defense DVIDS network.
4 / 4 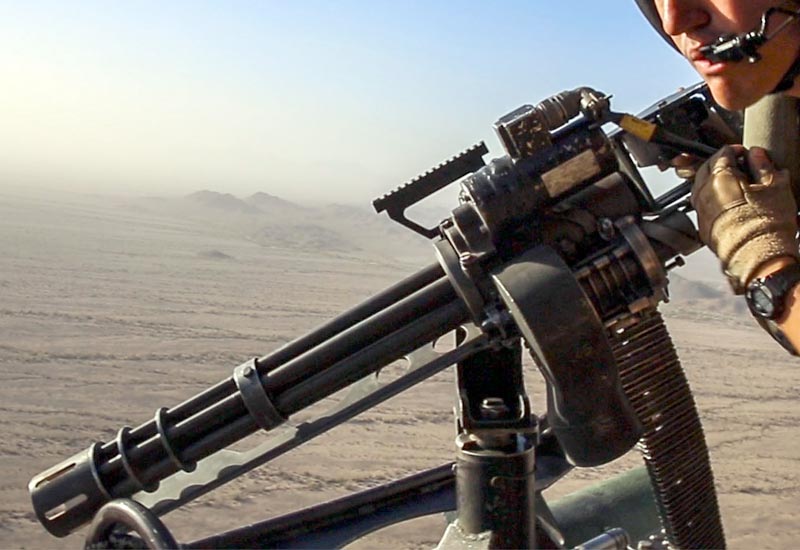