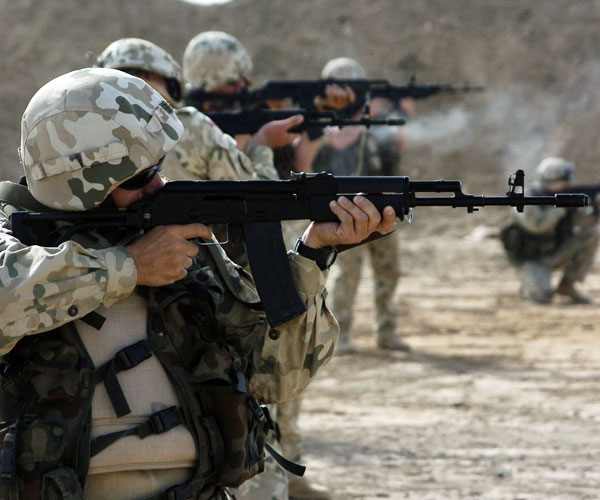 The wz. 1988 Tantal is little more than a Polish copy of the Russian-produced AK-74S model series with some Polish modifications.

Authored By: Staff Writer | Last Edited: 02/04/2019 | Content ©www.MilitaryFactory.com | The following text is exclusive to this site.
The Soviet reach over Eastern Europe during the Cold War was such that localized small arms design in these countries became largely influenced by the classic Kalashnikov AK-47 series. For the nation of Poland, "liberated" by the Soviet Union from Nazi German control by the end of World War 2 (1939-1945), the AK-47 lineage would prove critical in its attempt to develop an indigenous assault rifle system for standard issue. The result became the Kbk wz. 88 "Tantal".

In 1957, a modernized version of the AK-47 was revealed retaining the original's 7.62x39mm chambering and this became known as the AKM. In 1974, an all-new offering emerged as the AK-74 and this was designed along the lines of firing the 5.45x39mm rifle cartridge. This led to a version with a side-folding skeletal stock being issued as the AKS-74 which greatly improved the weapon's portability, particularly in the hands of paratroopers or special forces units. Its shortened assault carbine form then became the AKS-74U - both chambered in 5.45mm.

From the AKS-74 came the basis for a localized Polish variant to which design work spanned from 1981 to 1988 producing the wz. 1981 prototype model. While largely faithful to the Soviet design, the Polish model incorporated slight changes to improve manufacture and to suit Polish Army requirements. Black synthetic material substituted the original woodwork seen in many early Kalashnikovs externally. Internally, a three-round burst mechanism was added for selective-fire. The muzzle was fitted with a compensator to both support the mounting of a field bayonet and the launching of rifle grenades to broaden the infantryman's tactical reach. In its final form, the weapon was adopted by the Polish Army as the wz. 1988 "Tantal" in 1991 with serial manufacturing originating from the Lucznik Arms Factory of Radom. Some 25,000 units were produced from the period of 1989 to 1994.

The weapon retained a gas-operated action utilizing a rotating bolt. Rate-of-fire reached 700 rounds per minute with an effective firing range out to 500 meters. The feed system involved a 30-round curved detachable box magazine. Sighting was through a standard iron arrangement. Overall weight was 8.14 lb with an overall length (stock extended) of 37 inches. This was brought down to 29.4 inches with the stock folded over.

While Poland became the primary operator of the Tantal for its service life, the rifle eventually found its way to the Middle East fighting as it appeared in number with forces from Kurdistan and Syrian rebels. The Iraqi Army was sold some 10,000 of the guns from the Polish government following the 2003 U.S.-led invasion. Poland was an active contributor during the rebuilding years there.

For the Polish Army, the Tantal was removed from frontline service in 2005, replaced by the more modern wz. 1996 "Beryl" series in 5.56mm chambering. This weapon was brought along to fulfill a new requirement of the Polish Army for a 5.56x45mm NATO-standard assault rifle following Poland's acceptance into NATO in 1999. The Beryl assault rifle is detailed elsewhere on this site.

The retired Polish stock of Tantal guns has either been sold off or remains in storage. The Skbk wz. 1989 "Onyx" is an assault carbine version of the full-length Tantal series - still a gas-operated weapon chambered in 5.45mm though showcasing a folded length of just 20.4 inches.