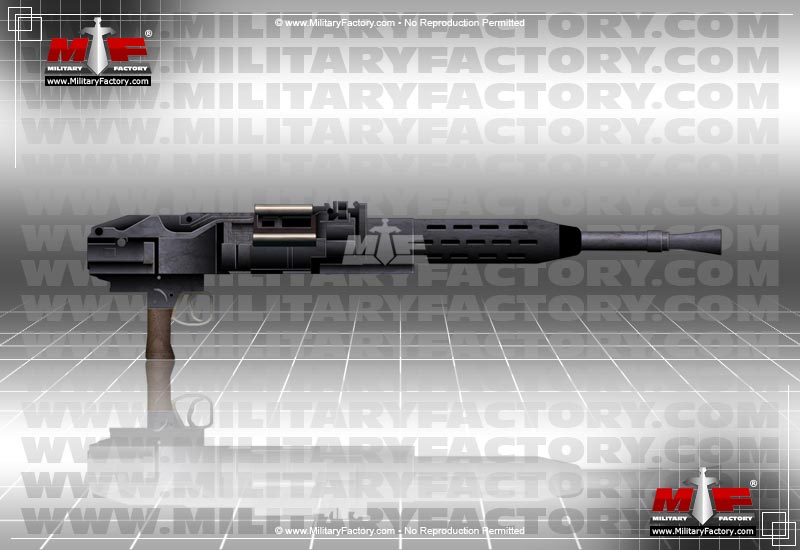 Unlike other Czech-originated guns adopted for British Army service in World War 2, the BESA series retained its original 7.92mm chambering.

The British Army, heading into World War 2, adopted several machine guns of Czech design - the BREN Light Machine Gun being perhaps the most notable of these adaptations. Another important, reliable weapon became the BESA, a medium-class machine gun for use on vehicles as well as in tanks. The weapon was based on the gas-operated, air-cooled, belt-fed Czech ZB vz. 37 and locally-produced, under license, in Britain. The BESA name came from the Birmingham Small Arms Company (at Redditch), which was abbreviated as "BSA" and said as "BESA". Beyond its use by the United Kingdom, it was employed by the armed forces of Ireland. Several variants ultimately emerged following commencement of production in 1939.

Interestingly, the BESA retained its original chambering for the German 7.92x57mm Mauser cartridge as oppose to being modified for the British 0.303 rifle cartridge. This was done as an expedient due to the worsening situation in Europe and the British need for all manner of war-making material. Additionally, should the British face off again with the Germans, any captured 7.92mm ammunition could be reused by the British against its former owner.
Advertisements

Also debuting during June of 1940 was the "BESA Mk II" which added a rate-of-fire mode selector, allowing rates of 500 and 800 rounds per minute to be used. The receiver was also cleaned up and a short barrel sleeve added for heat dissipation. The barrel was further capped by a flash suppressor.

During August of 1941, the "BESA Mk III" appeared as a streamlined war-time expedient intended for mass production. These lacked the rate-of-fire selector which simplified their manufacture and operation, firing at a fixed 750 rounds per minute. With the arrival of the Mk III, any additional new production stock of Mk II guns were now identified as "Mk II*". They included the production simplifications introduced with the Mk III models.

The final BESA gun variant was the BESA Mk III* also of August 1941. These lacked a rate-of-fire selector and were fixed at a rate of 450 rounds.

The BESA gun line in British service underwent a rocky developmental period which delayed its ultimate entry into service. Early guns delivered during June of 1939 proved largely unsound which resulted in a vest re-engineering effort to make the guns more practical in every sense. Once cleared of its limitations, the weapons became utterly reliable and robust under the worst of combat conditions. The revised, recoil-dampening action of the British development made for a more accurate gunnery platform and its rate-of-fire selector system (those equipped as such) allowed operators to with lower rates at range and at higher rates for close-in work. As such, BESA guns saw widespread service on many British and Commonwealth Army vehicles including tanks with production totaling 59,332 units in all.

There proved still another related BESA gun form, this being one chambered for the 15x104mm cartridge (15mm) and based on the select-fire Czech ZB vz. 60 heavy machine gun. Some 3,218 of the type were produced, which proved limiting the grand scope of World War 2 small arms production, and these saw use only a few vehicle types. By the end of the war, this design had been superseded by autocannons and not evolved further. They were eventually given up for good in 1949.

*May not represent an exhuastive list; calibers are model-specific dependent, always consult official manufacturer sources.
**Graphics not to actual size; not all cartridges may be represented visually; graphics intended for general reference only.
Rate-of-Fire
650
rds/min
Muzzle Velocity
2,700 ft/sec
(823 m/sec)