The World War 2-era Soviet PPSh-41 submachine is still being encountered on the battlefields of today.

Authored By: Dan Alex | Last Edited: 08/15/2021 | Content ©www.MilitaryFactory.com | The following text is exclusive to this site. 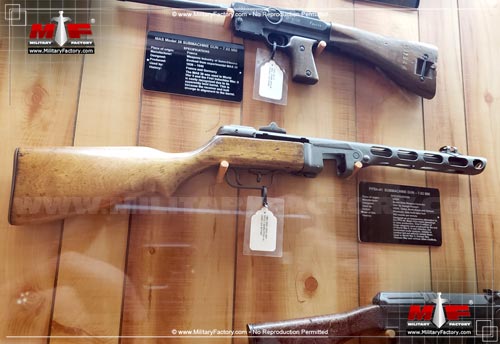 The Soviet Army began experimentation of submachine gun class weapons in the latter half of the 1920s. By the time of World War 2, they had a small stable of such weapons and these were naturally of expensive quality - having been designed, developed and produced during peacetime. As such, the Red Army solder lacked the intermediate weapon that played well within the gap created by the standard service bolt-action rifle and the machine gun of the time. This came to dreadful focus during the Winter War against Finland where the Finns utilized submachine guns to good effect and subsequently dealt embarrassing defeats upon the Red Army before an interim peace was met. To encompass the scope of the fighting, Finnish dead and missing totaled 26,000 to the Soviet 127,000.

However, everything changed on June 22nd, 1941 when Hitler and his grand Axis army of German, Romanian, Italian, Hungarian and Slovakian soldiers launched overwhelming campaigns against the Soviet West through Operation Barbarossa. The one-time allies were now mortal enemies as the Soviet Union was put on its heels. The Soviet response was discombobulated and much territory was lost in the fighting as the Axis forces reached the outskirts of the capital of Moscow. However, the brutal Soviet winter had set in and the Germans dug in, allowing the Red Army the respite it so desperately needed. During the preceding fighting, the Soviet Army had lost many men to death and capture and thousands of tanks, military vehicles and artillery. To compound matters, many small arms stores and manufacturing facilities were now in German-held lands - taking away much of the Soviet war-production infrastructure. With a break in the fighting, new factories were opened in the Soviet East and design and development of new weapons frantically ensued.

Expedient development of such weaponry went on to produce the "PPSh-41" of 1941, a crude yet effective high-volume fire submachine gun chambered in the 7.62x25mm Tokarev pistol caliber. This weapon would go on to become the iconic symbol of the Soviet struggle against German might during its dark days of World War 2, also becoming the standardized Soviet submachine gun of the entire war in the process. Design of the weapon was attributed to Georgi Shpagin and production began earnestly in 1941 to help stock the inventory of the Red Army. At its core, the weapon featured a rifle-style wooden stock and integrated lower receiver. The stock was ergonomically shaped to form a pistol grip and not unlike the stock of bolt-action service rifles of the time, thusly simplifying production. The upper receiver was metal and embedded within the lower wooden section. Metal works extended forward to house the magazine well and critical internal working components. The barrel protruded forwards and was shrouded over in a perforated tubular cover. There was a rear iron sight over the receiver with the forward sight aft of the muzzle. The trigger system was slung under the wooden section of the receiver. Magazine types included the standard 71-round drum or a 35-round detachable box magazine though the former proved much popular in combat. Either way, the weapon was designed to put voluminous fire into a single target area and in this way the weapon did not disappoint its operators. The firing action was of blowback with an open bolt arrangement. To maintain the weapon in-the-field, the operator merely managed the hinged receiver which gave access to both bolt and spring for cleaning and repair.

Outward construction quality was a bare minimum considering its desperate war time production nature. The barrel was of course chrome-lined for the rigors of battle. A selector switch allowed for semi-automatic and full-automatic modes of fire for ammunition control though late-war models simply featured full-automatic fire for simplicity's sake. Rate-of-fire was approximately 900 rounds-per-minute with a 1,600 feet-per-second muzzle velocity. Muzzle climb was very apparent in full-automatic fire but this was offset to an extent by the addition of a basic muzzle compensator. Range was out to 820 feet depending on environment and conditions but the inherent nature of the submachine gun was short-to-medium ranges. The ammunition counts available were also very prized when compared to its contemporaries in the West, ensuring the Red Army soldier would be properly stocked when going to war.
Advertisements

With the arrival of the PPSh-41, the Red Army was now made more ready to fight Germany. Soviet military planners reworked small unit tactics to take full advantage of the new submachine gun and the PPSh-41 went on to be a star for the Red Army for the duration of the war. Where service rifles were tactically limited and machine guns were few in number, it was not uncommon for whole platoons to be issue just these submachine guns as well as ammunition and grenades. In any case, the PPSh-41 gave a good account of itself, particularly when soldiers attempted to storm enemy pillboxes or trenches. Additionally, the weapon saw extensive use in the bloody house-to-house, building-to-building fighting that symbolized the Soviet-German campaigns of the war. By 1945, the final year of the war, the PPSh-41 has been manufactured in numbers nearing five million examples. Its readily available stock and ease of manufacture only ensured it a long and healthy life in the Cold War to follow.

While the Red Army formally discontinued use of the PPSh-41 in the 1950s after the introduction of their Kalashnikov AK-47 assault rifle line, the PPSh-41 saw extended use through Soviet allied nations and satellite states where her basic qualities could really be appreciated by the budget conscious shopper. The weapon went on to see use with forces of Albania, China, Cuba, Guinea, Hungary, Iran, Laos, North Korea, Poland, North Vietnam/Vietnam and Yugoslavia. Finnish soldiers made use of captured stocks in the Continuation War (June 1941 to September 1944) as did the Germany Army. The German Army managed to capture so many examples during World War 2 that the weapon was issued to German troops in two different versions - the MP41(r) was the PPSh-41 converted to fire the German 9mm Parabellum submachine gun cartridge while the MP717(r) was the base, unmodified Soviet PPSh-41 firing the lower-powered and dimensionally similar German 7.63x25mm Mauser cartridge. Hungary reconstituted captured samples of the PPSh-41 as well.

The PPSH-41 went on to see license production in a handful of countries following the war. Iran produced a version differentiated by use of a tangent rear sight and several derivatives later appeared. Vietnam managed a copy of the PPSh-41 under the designation of "K-50M". The "M49" of Yugoslavia was outwardly identical to the Soviet design and accepted its magazines but was internally different. North Korea produced the PPSh-41 as the "Type 49" under license. While Hungary operated the weapon in its captured form during World War 2, it also went on to license-produce the type in the years following and Poland also joined in on local production of the Soviet weapon. Chinese military industry took to illegally copying and producing the type as the "Type 50".

The legacy of the PPSh-41 did not end with World War 2 for it went on to see combat in the Korean War and the Vietnam War to follow - either in the original Soviet PPSh-41 form or in the North Korean Type 49 and Chinese Type 50 forms. The weapon saw service in the Chinese Civil War, the Bay of Pigs Invasion as well as Cambodian Civil War. All told, production of the PPSh-41 ultimately totaled six million units and the type can still be found in limited use today (2012). This is driven home by the fact that examples have been confiscated as far away as Iraq within the last decade after the American invasion of 2003.

For most of the world, the PPSh-41 eventually gave way to the glut of Kalashnikov automatic weapons appearing in the 1950s and onwards.

The PPSh-41 designation comes from the words Pistolet-Pulemyot Shpagina which, when translated to Russian, becomes Shpagin Machine Pistol - named after Georgi Shpagin. The "41" designates the year of introduction - in this case "1941".
Advertisements

Blowback Operation
Gas pressure from the rearward movement of the ignited cartridge case provides the needed bolt movement, ejecting the spent case and stripping a fresh case from the magazine. Open Bolt
System utilizes internal mechanism where bolt and associated working components are set to the rear of the receiver with no cartridge chambered; trigger actuation moves bolt forward, chambers cartridge, and fires bullet in single action - ultimately resetting during the complete cycle by way of the generated energy. (Material presented above is for historical and entertainment value and should not be construed as usable for hardware restoration, maintenance, or general operation - always consult official manufacturer sources for such information)


35-Round Detachable Box or 71-Round Drum Magazine 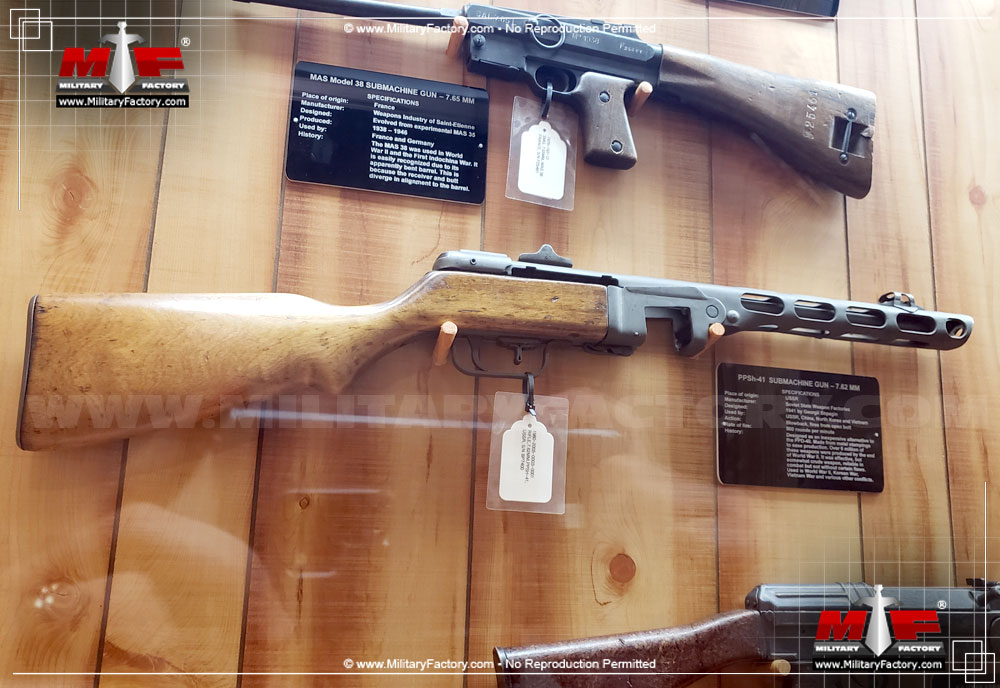 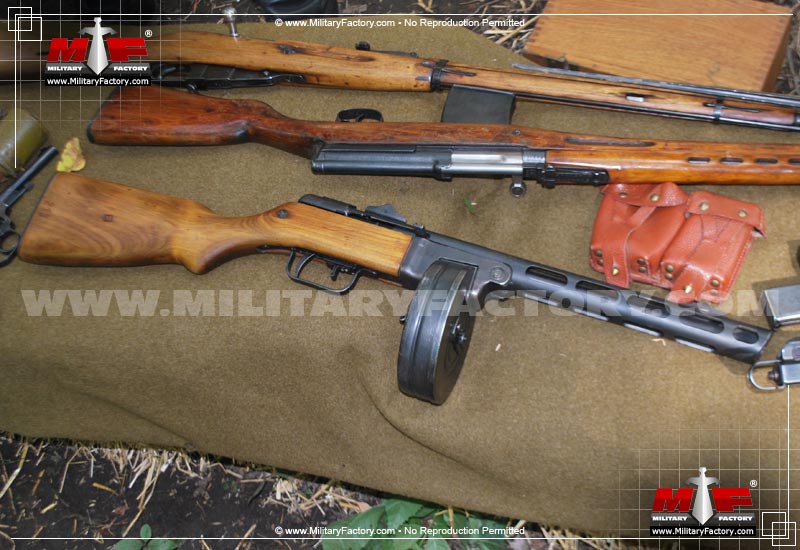 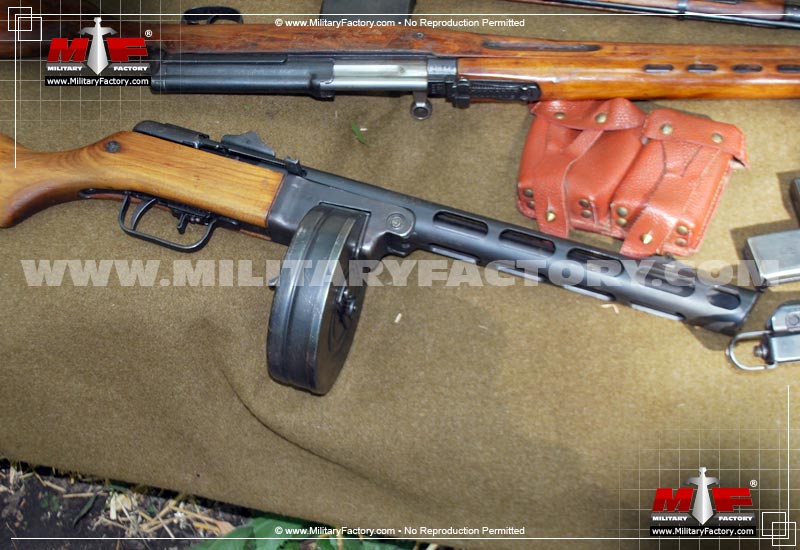 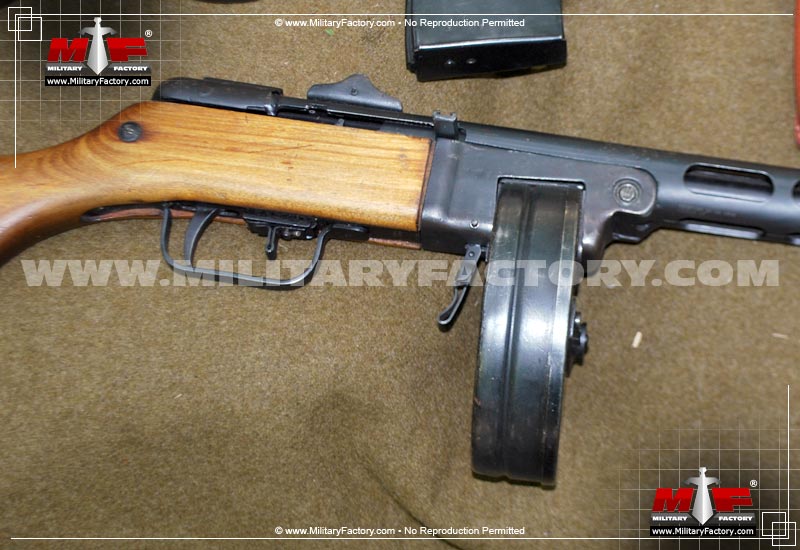 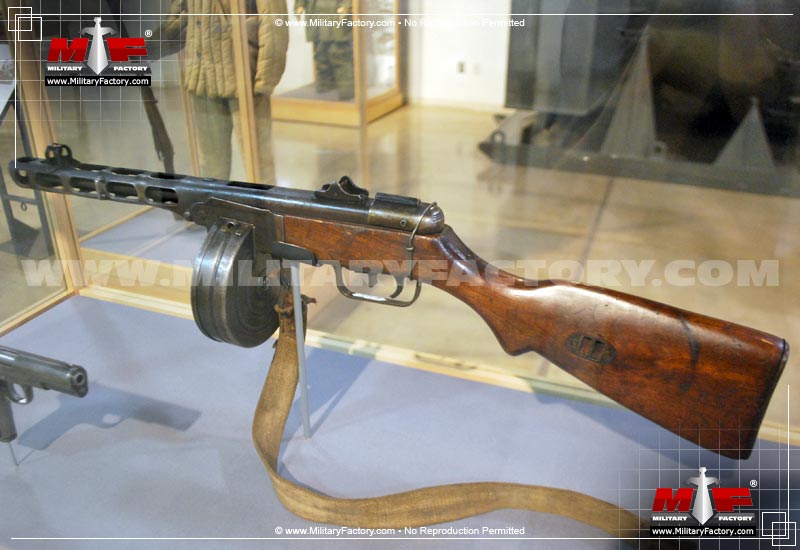 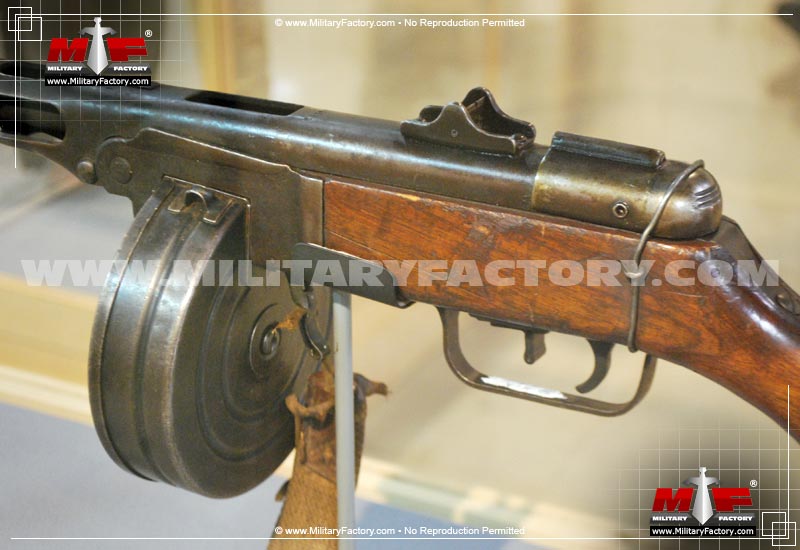 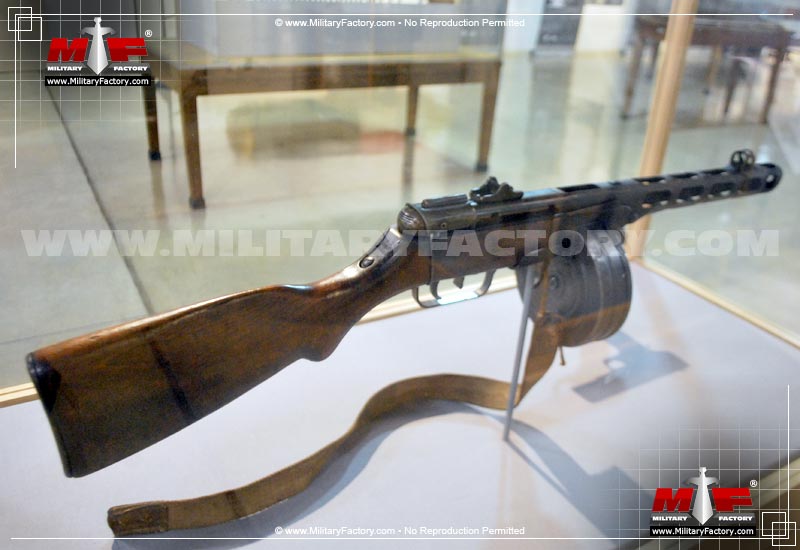 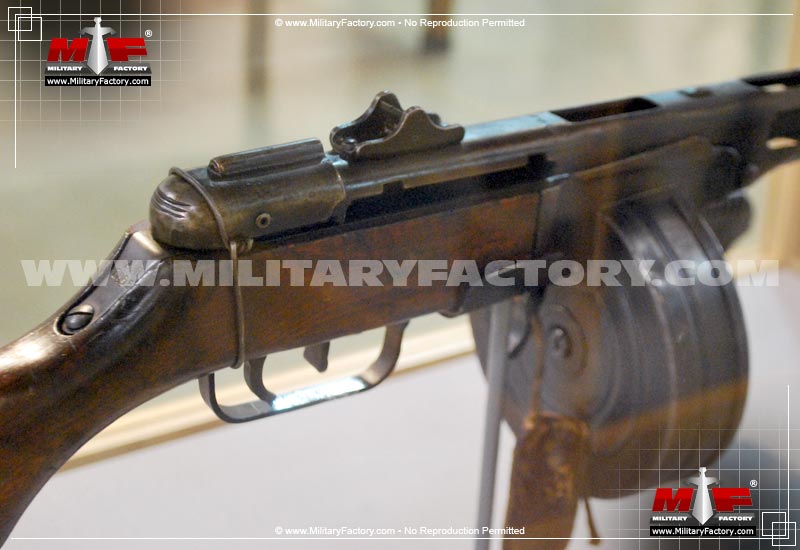 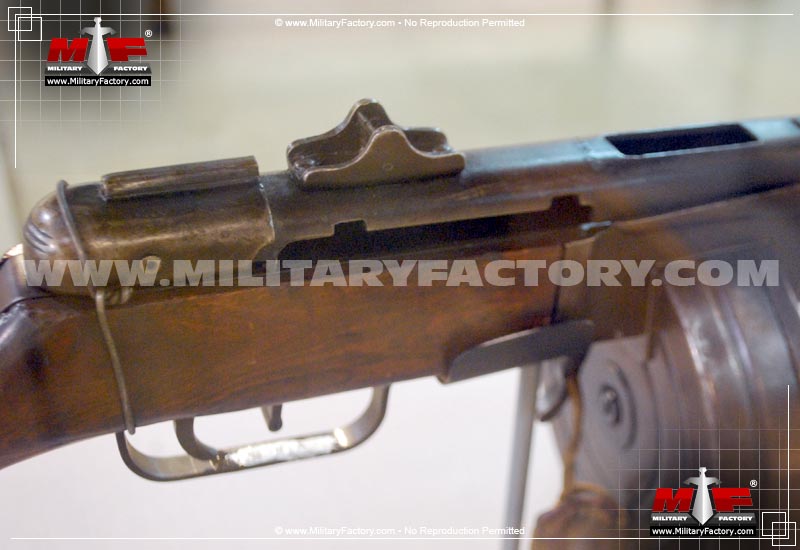 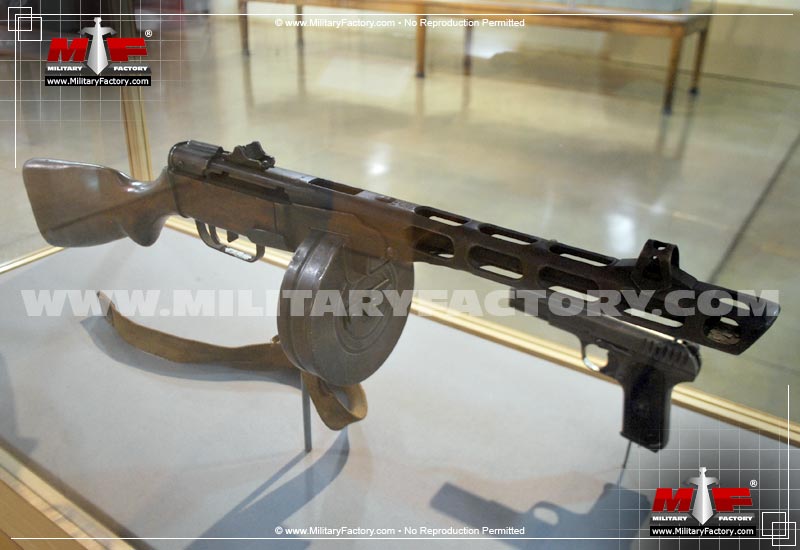 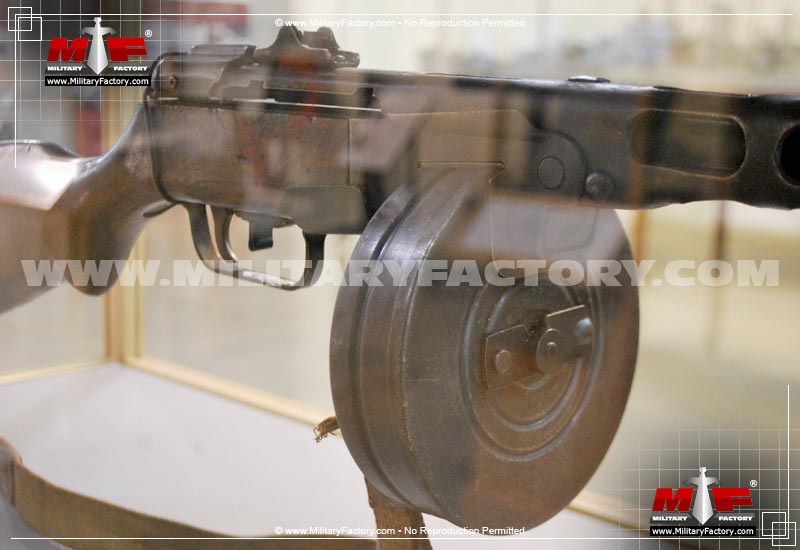 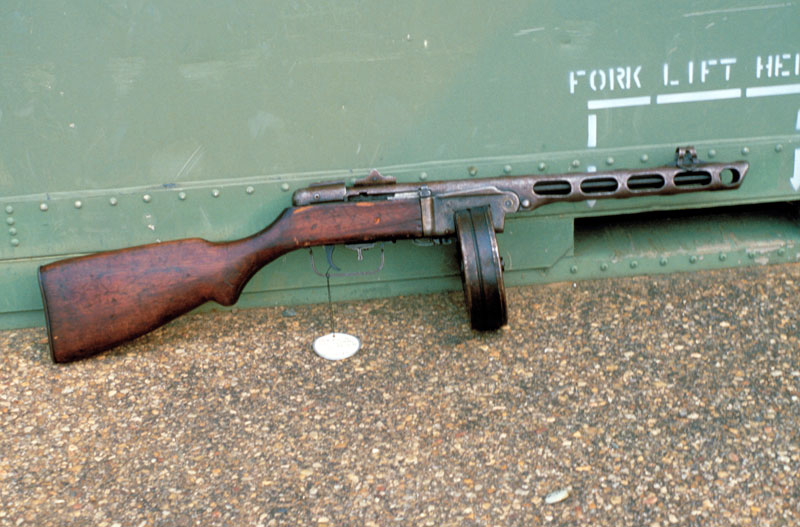