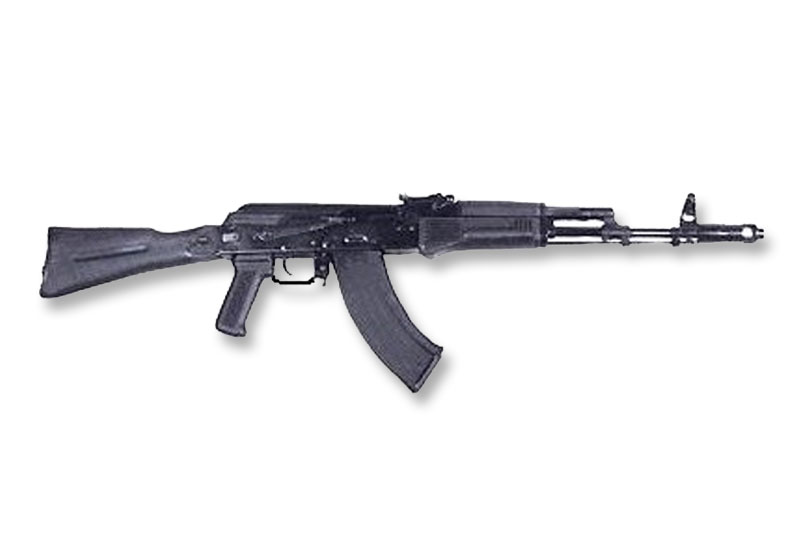 Right side view of the Kalashnikov AK-103 assault rifle

The AK-103 is a modernized incarnation of the fabled AK-47 system.

Authored By: Staff Writer | Last Edited: 08/21/2019 | Content ©www.MilitaryFactory.com | The following text is exclusive to this site.
The AK-103 represents a modernized form of the AKM assault rifle from the mind of Mikhail Kalashnikov. The AKM was unveiled in 1959 and proved an ultimate success throughout countless global conflicts including the Vietnam War, Iran-Iraq War and Operation Enduring Freedom in Afghanistan to name a few. Despite her 1960s vintage, the AKM - in her vintage form - has remained a stalwart accomplice to plenty of high-level action across the globe. The AK-103 simply takes the excellent qualities of the AKM system and brings them into the modern age with plastic composites and polymers replacing the old (and heavy) wood furniture of earlier Kalashnikov rifle attempts. The AK-103 also distinguishes itself from her former form by introducing support for accessories, optics and modern grenade launchers. Design of the AK-103 occurred in 1994 and production has since been handled by the Izhevsk Mechanical Works to which some 160,000 examples have been delivered. Operators of the AK-103 include Ethiopia, India, Venezuela, and certain specialized Russian police forces.

Externally, the AK-103 displays much of the same lines of the AK-47 form the 1950s. Additionally, it incorporates some of the features of the export-only AK-101 series. The gas cylinder is mounted atop the barrel in true Kalashnikov fashion and there is a noticeable flash suppressor and forward sight post. The stock is ergonomic and set behind the receiver. The pistol grip is straight and angled rearwards behind the curved trigger. The trigger is protected by a angular ring and sits behind the magazine feed. The base standard sights are adjustable (notch rear, half-globe post front) and optics can be installed along the top of the receiver. Additionally, aiming lasers and flashlights as well as the GP-30 single-shot grenade launcher can be affixed around the forend and under the barrel.

The weapon weighs in at 7.5lbs sans the magazine installed. Overall length is 37.1 inches with the stock fully extended and 27.6 inches with the stock collapsed along the side of the receiver. The barrel is 16.3 inches in length. Like the AKM, the AK-103 (and AK-104 for that matter) are chambered for the 7.62x39mm standard Russian cartridge dating back to the Soviet era. The firing action is gas operated with a rotating bolt from a 30-round, curved detachable magazine. Rate of fire is around 650 rounds per minute with a muzzle velocity of 2,411 feet per second. Range is out to 500 meters.

The AK-103 was naturally evolved into a more compact carbine form under the designation of AK-104, in much the same way the full-length AK-101 is to the shorter AK-102 series.