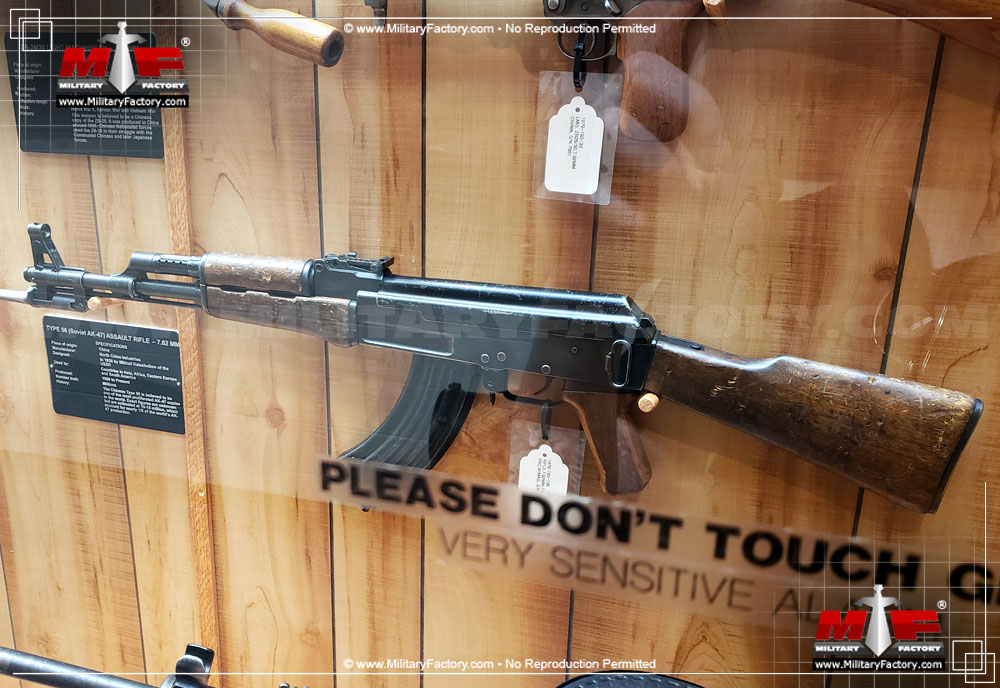 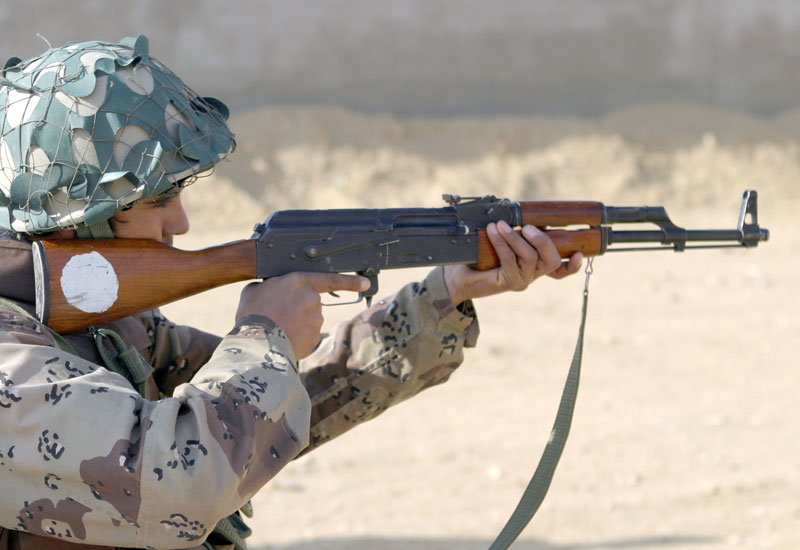 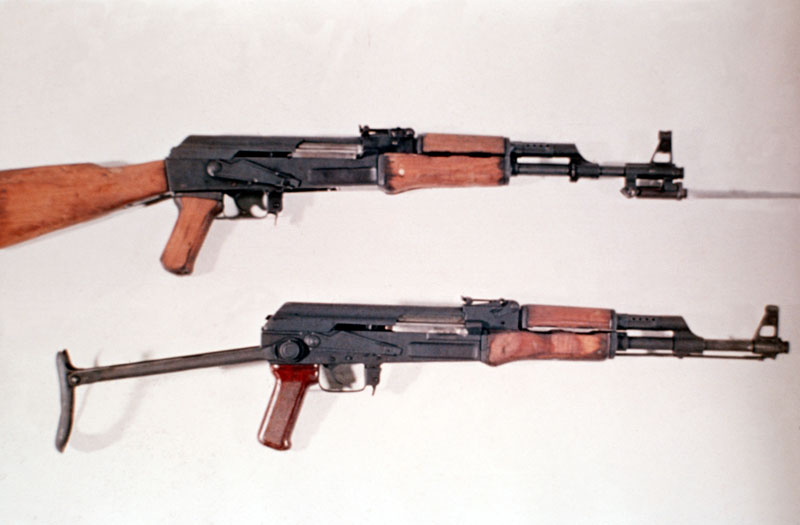 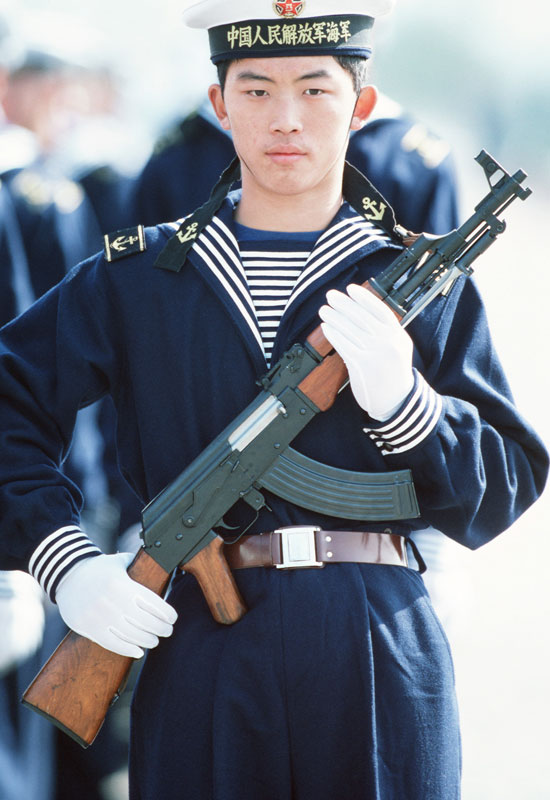 A Chinese sailor sports a Type 56 assault rifle during presentation

The Type 56 is nothing more than a Chinese copy of the Soviet AK-47 assault rifle.

Authored By: Staff Writer | Last Edited: 05/09/2019 | Content ©www.MilitaryFactory.com | The following text is exclusive to this site.
To make the Soviet AK-47 readily available and at a lower procurement cost, the Chinese took to locally manufacturing the assault rifle under the designation of "Type 56" albeit with some slight alterations to suit Chinese taste/needs. Overall, however, the Type 56 remained true to her AK-47 origins, making the Type 56 nothing more than a budget Chinese copy of the original. The key identifying feature of the Type 56 included a folding bayonet mounting underneath the barrel. This allowed the bayonet to be stowed for a more compact size and folded forward into combat position when needed. Early Type 56 production models also featured visible markers for the single-shot and full-automatic fire modes, marked distinctly (and respectively) as "D" and "L". Design began in 1947 and production started in 1956 (ongoing today as well). NORINCO of China handled manufacture and Bangladesh Ordnance Factory in Bangladesh signed on to produce local license-production copies. To date, some 10 to 15 million examples are believed to have been produced.

Base production assault rifles were designated simply as "Type 56" with the system entering operational service in 1956. Original forms had machined receivers while later ones were stamped to coincide with the modernized Soviet AK-47 series - the "AKM". Other operators (beyond the Chinese) have included Afghanistan, Albania (some locally-produced), Bangladesh, Bosnia-Herzegovina, Cambodia, Iraq, Laos, North Korea, Pakistan and Sudan (made under license) among others. Like the AK-47 before it, the Type 56 was chambered to fire the 7.62x39mm Soviet intermediate cartridge, these from a 30-round detachable, curved box magazine. As in the AK-47, the selective firing action was gas-operated with a rotating bolt.

The Type 56-1 variant was later unveiled to showcase a double-strut folding buttstock. As in the AKM, the process saw the stock folded forward and under the receiver as opposed to over it. These models could be identified and differentiated from the Soviet types by their use of noticeable rivets to hinge the arms for folding. The Type 56-2 was nothing more than the Type 56-1 production model appearing in 1980 and featuring an all new buttstock which folded over the side of the receiver. Additionally, the bayonet mounting was dropped and the rifle became an export product to interested parties. In 1991, the shortened Type 56C carbine version (official Chinese designation of "QBZ-56C") came to light and made use of more plastic furniture as opposed to the original's wood fittings. Other improvements from previous NORINCO-produced models (and revised Soviet-produced AK-47 models for that matter) were incorporated into the design to help it stay relevant to the changing conditions of the modern battlefield. These included the implementation of a side-folding stock sporting a cheekpiece (adding both portability and ergonomics to the weapon system) and a muzzle-brake/flash suppressor assembly over the muzzle. The Type 56C was also lighter and more compact, making for a stable gun platform that improved on portability - suitable for special forces use.

Two civilian versions became the Type 56S (also known as the Type 56 "Sporter" and the Type 84S. The former was offered in the typical "semi-automatic fire only" design while the latter was chambered to fire the 5.56x45mm NATO standard cartridge.

The Type 56 series, as a whole, went on to see extensive combat actions in the Vietnam War and several upcoming regional conflicts across Southeast Asia as well as the Sri Lankan Civil War, the Soviet War in Afghanistan, the Iran-Iraq War and the Kosovo War and its related conflicts to name a few. In the Vietnam War, the Viet Cong were known to utilize the weapon in great numbers. The Soviet AKM version eventually replaced these.

Mind you that "Type 56" is also used to designate the unrelated Chinese automatic rifle - essentially a copy of the Soviet SKS - though the two are very different weapons. The Chinese SKS is most often identified as the "Type 56 Carbine" to differentiate between the two weapon systems.

While Iran purchased stocks of Type 56 from China to fight the Iran-Iraq War, it also saw fit to reverse-engineered the rifle to create the indigenous (albeit illegal) KL-7.62 assault system. Design and production was handled by DIO and only later models differed from the original Type 56 by way of plastic stocks and foregrips.

Rotating Bolt
System utilizes internal mechanism to lock the breech or rear barrel assembly prior to firing. (Material presented above is for historical and entertainment value and should not be construed as usable for hardware restoration, maintenance, or general operation - always consult official manufacturer sources for such information)