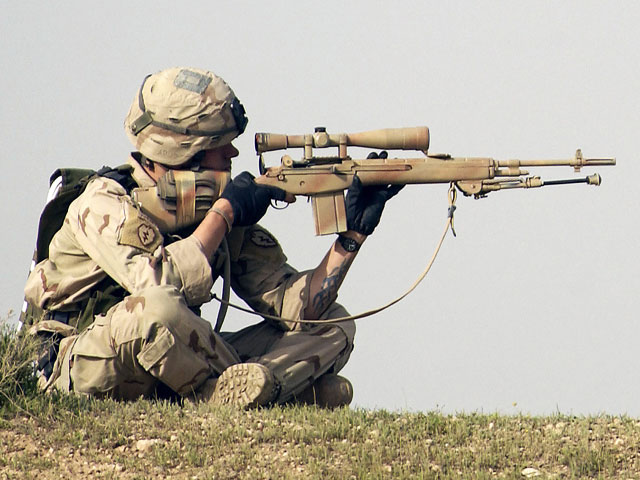 The M21 rifle was developed from the base M14 rifle which itself was derived from the World War 2 M1 Garand.

Authored By: Staff Writer | Last Edited: 06/16/2018 | Content ©www.MilitaryFactory.com | The following text is exclusive to this site.
The M21 was developed from the standard M14 rifle, itself a further development of the highly successful World War 2-era M1 Garand. Where the Garand was a clip-loading, semi-automatic rifle, the M14 operated from a 20-round detachable box magazine and offered selective fire. The original M1 Garand proved to be a god-send for the Allies, becoming a rifle known for its accuracy and rugged handling. As such, it was only natural to improve upon the Garand design, this resulting in the M14 rifle. The m14 proved as accurate and reliable as its predecessor ultimately paving the way for its use as an equally effective sniper system.

With the Vietnam War in full swing, the United States Army found itself on the market for a quality sniper rifle. Such qualities were inherent in the M14 rifle and it soon lent itself well to special modification under the weaponsmiths of the Rock Island Arsenal. M14 rifles were converted to this new form, offering the same high-caliber hitting power of the M14 while delivering on accuracy through some subtle additions - namely in the form of a ranging telescopic sight. The new system was christened the XM21 and about 1,435 rifles were modified in this fashion for the United States Army. The weapon served with distinction mainly in the Vietnam War.

In 1975, the weapon system was redesignated the more familiar M21 Sniper Weapon System (SWS). The rifle served with US forces up until the late 1980's to which it was replaced by the favored M24 Sniper Weapon System (SWS), a rifle based on the renowned Remington Model 700 series (the US Marine Corps uses this Remington model in a similar guise designated as the M40). Selection of the M24 passed on the automatic qualities of the M21 and settled to a bolt-action operation. The M21 was later improved for use by US Special Forces elements as the M25, though these saw limited use and limited production.

At its core, the M21 retains many of the inherent qualities - and thus benefits - of the M14 rifle. It features an integrated McMillan M1A fiberglass stock with hand grip and trigger unit, mountings for variable telescopic sights and a straight-form detachable ammunition box (as found on the base M14 rifle). The weapon fires the standard 7.56x51mm NATO round from 5-, 10- or 20-round boxes though the 20-round quantity is most common. The weapon's action is of M14NM (National Match). Sights include both the aforementioned telescopic sight (Bausch & Lomb Tactical 10x40 or Leupold MK4 10x scope) and a standard front-mounted blade and rear-mounted adjustable hooded aperture. Muzzle velocity is listed at 2,800 feet per second with an effective range out to 750 yards.

The M21 served with US forces from 1969 through 1988. The weapon still serves with some US National Guard units on location in Iraq.