Authored By: Dan Alex | Last Edited: 05/25/2022 | Content ©www.MilitaryFactory.com | The following text is exclusive to this site. 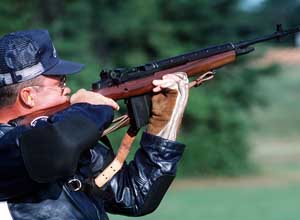 The M14 was brought about to fulfill an American military requirement for a new standard issue service rifle due to the acceptance of the 7.62x51mm NATO (.308 Winchester) cartridge by both the United States and its NATO allies. Instead of opting for a capable, existing foreign design, it proved favorable to take on a locally-designed and produced American automatic rifle. The new weapon became the Springfield "M14" which was more or less a highly modernized M1 Garand rifle of World War 2 (1939-1945) fame. Design work on the new rifle began in 1954.

The M1 Garand served as the standard-issue service rifle of the United States Army from 1936 to 1957 and was used from World War 2 through to the Iran-Iraq War (1980-1988) by various parties around the globe. Multiple manufacturers contributed to the millions of rifles produced including the legendary Springfield Armory of the United States. The weapon proved hefty for a service rifle at about 11.5lbs (depending on version in use) and was limited to an 8-round, clip-fed function (though this proved much more useful than bolt-action rifles of the period being limited to three or five rounds and operated manually). The weapon was chambered for the U.S. .30-06 Springfield cartridge and fired from a gas-operated, rotating bolt action, going on to become one of the best - if not THE best - service rifles of World War 2. Total production ended with about 6.2 million units entering circulation.

Given this pedigree, the M14 was no doubt built upon a stellar foundation. Indeed, the M14 retained the long-running, heavyweight stock of the former design with its integrated shoulder and pistol grip sections as well as the forend running under the barrel assembly. The trigger unit was underslung in the usual way and over the barrel was fitted a ribbed heatshield. The gas cylinder ran under the barrel with the barrel capped by a slotted compensator. An adjustable rear aperture and front "barleycorn" sight were used in training the weapon down range. Instead of the Garand's 8-round, clip-fed system, a more modern 20-round detachable box magazine was used - the magazine inserted under the receiver through a well located just ahead of the trigger.

Internally, the action remained the same as in the Garand - gas-operated with a rotating bolt. Rate-of-fire reached between 700- and 750-rounds per minute with a muzzle velocity of 2,800 feet per second and an effective firing range out to 500 yards. Key to the M14's function was a semi-automatic and full-automatic firing selector making the rifle the first American weapon to feature this "dual-mode" function since the days of the World War 1-era Browning M1918 "BAR". The 20-round magazine was a considerable upgrade from the limited 8-round capacity of the Garand.
Advertisements

In practice, the M14 proved itself as a functional semi-automatic rifle - its full-automatic feature was seldom used, both to help preserve ammunition and also due to the inherent lack of control of the weapon when under full-automatic fire. The full-automatic fire function generated also tended to generate intense heat at the barrel, the barrel not being made easily changeable as it would be in a light machine gun. In time, a folding stock variant was revealed to help promote a more compact travel profile and a specialized sniper weapon system appeared through the "M21" mark. This model mated specially-selected M14 bodies to telescopic sighting devices for precision fire, providing an effective range out over 875 yards. Thousands of M14s were converted to this form and thrived in service until replaced by the M24 during 1988.

When adopted into American service, the M14 was intended to replace the M1 Garand itself, the M1 Carbine, the M3 Grease Gun submachine gun, and the Browning M1918 BAR light automatic rifles - these weapons having served throughout World War 2 and the Korean War (1950-1953). In all, about 1.5 million units of the M14 were produced by Springfield Armory during a period spanning from 1959 to 1964. Its particular period of introduction meant that the system was much too late to see service in the Korean War but played a major role in the Vietnam War (1955-1975). Delays in manufacture forced units to continue use of other established weapons while the M14 increased its circulation reach within the American military inventory. Frontline use began as soon as 1961 with some select units of the United States Army and Marine Corps becoming initial operators.

During the Vietnam Conflict, the M14 gave a good account of itself thanks to its powerful rifle cartridge and useful engagement ranges. Where it suffered was in the same qualities that limited the famous Garand - weight and length. The full-automatic function was also not favored due to the uncontrollable nature of the rifle in this mode - despite its weight it was not "heavy enough" for such use. The confined spaces of jungle warfare also proved better suited to short-length weapons such as the incoming M16 rifle and submachine guns. To add to this, the jungle environment, with its unforgiving moisture, affected the largely wooden bodies of M14s and led to deformations in their structures in turn reducing inherent accuracy.

The M14 essentially failed in its drive to supersede the M1 Garand and its World War 2 / Korean War counterparts and was eventually described by U.S. military authorities as an inferior product when compared to the classic Garand rifle. This led to a rather short frontline service life for the M14 - the second shortest of any rifle in American history - for it was soon replaced beginning in 1966 by the plastic and metal Colt M-16 assault rifle. The assault rifle quickly became the new fighting weapon of the infantryman and led to the reduced impact of the once-standard, full-stocked service rifle - eventually categorized during the Cold War decades as "Battle Rifles". However, due to the early troubles encountered with M16s in the field, some American infantrymen in the Vietnam War still held on to their trusty M14s for a time longer. Despite its extremely short front line tenure, the M14 still managed to become the longest serving rifle in the history of the United States military.

Despite its low-key wartime history, the M14 endured as a popular weapon into the post-Vietnam War years. The United States Navy SEALs appreciated the robustness of the system enough to adopt it as a sniper and Dedicated Marksman Rifle (DMR) weapon - the latter becoming the heavily modified Mk 14 Mod 0 EBR ("Enhanced Battle Rifle"). The M25, another M14 offshoot, was adopted as a sniper platform by special forces units (including the Green Berets) of the United States Army.

There was a brief attempt at making the M14 a dedicated light automatic weapon for squad level service with the M14A1 mark. This version was intended to serve alongside the base M14 and provide some much-needed offensive suppression support where a heavy machine gun could not. For the role, the M14 was revised with a standalone pistol grip and inline shoulder stock for improved control in full-automatic fire. A folding bipod resided under the barrel at the end of the gas cylinder for frontal support and a fold-down vertical foregrip was added for additional control at front. A sheet metal shroud was affixed over the muzzle to serve as a compensator. The original internal action was retained. While these changes intended to broaden the tactical usefulness of the M14, it did little to find favorable use by military forces - production was severely limited for U.S. Army service for all of the limitations and faults inherent in the base M14 were still apparent in the M14A1. It was a weapon still best served in the field as a semi-automatic service rifle and nothing more.

A plethora of M14-related weapons eventually emerged from the base design beyond the forms mentioned above. Even NORINCO of China copied the rifle as the M14S/M305. The weapon found operators at every level - military, police, sport-shooters - from Argentina to Venezuela. After having procured the required machinery for local production in 1967, Taiwan manufactured the M14 as the "Type 57" / "Model 57" in number. These were manufactured into the latter part of the 1980s.

May 2022 - The Springfield M14 Battle Rifle has been seen on the fronts of the Ukrainian-Russian War of 2022.

Springfield Armory (among others) - USA
(View other Arms-Related Manufacturers) 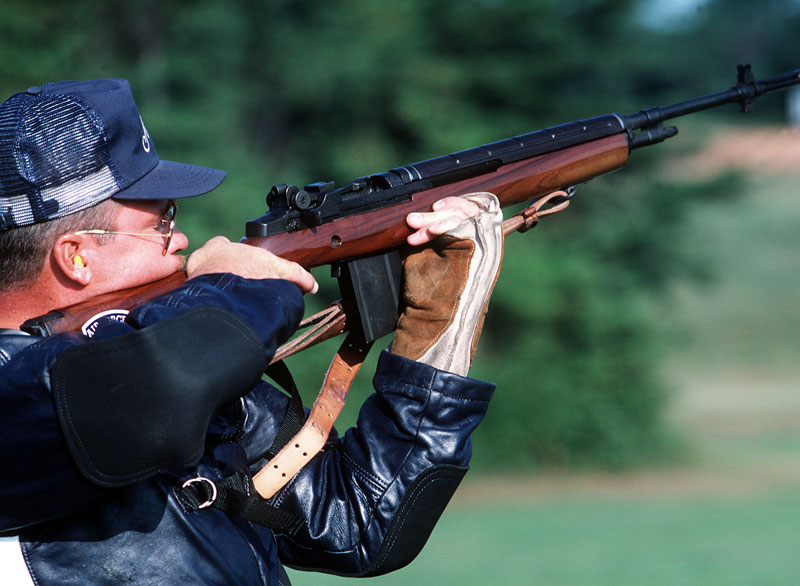 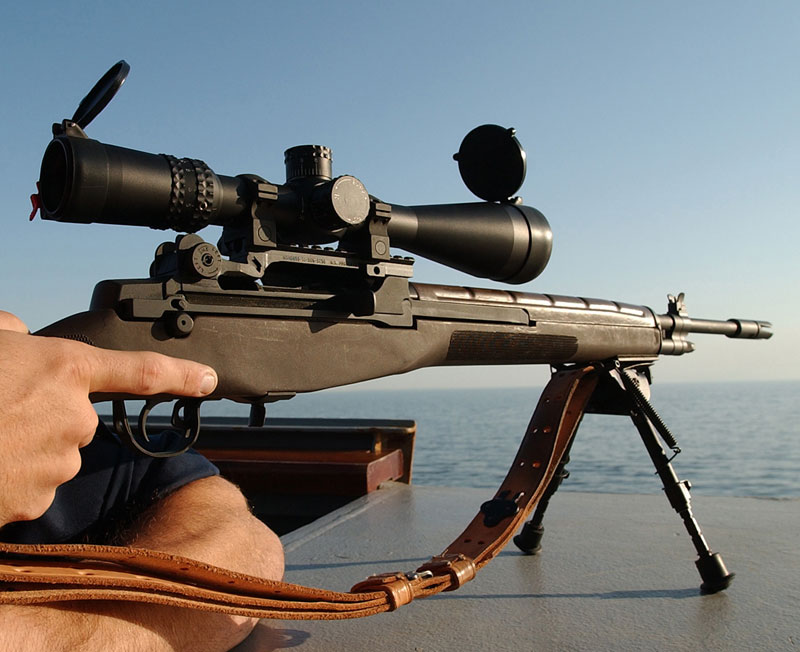 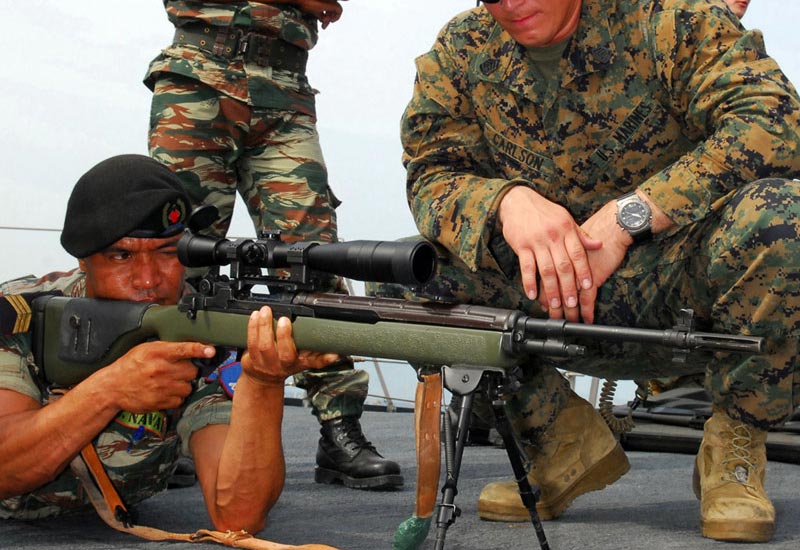 A Marine takes aim through the scope of his Springfield M14 sniper rifle; color
4 / 10 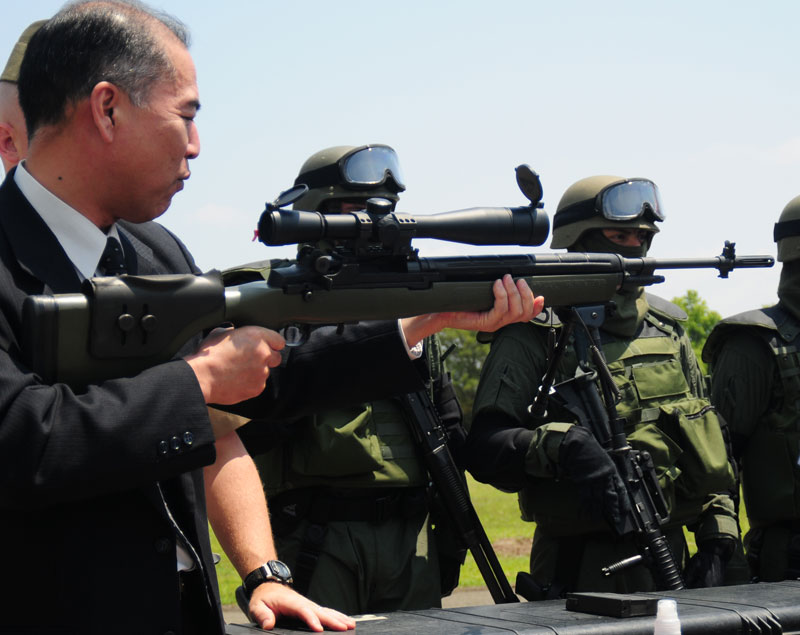 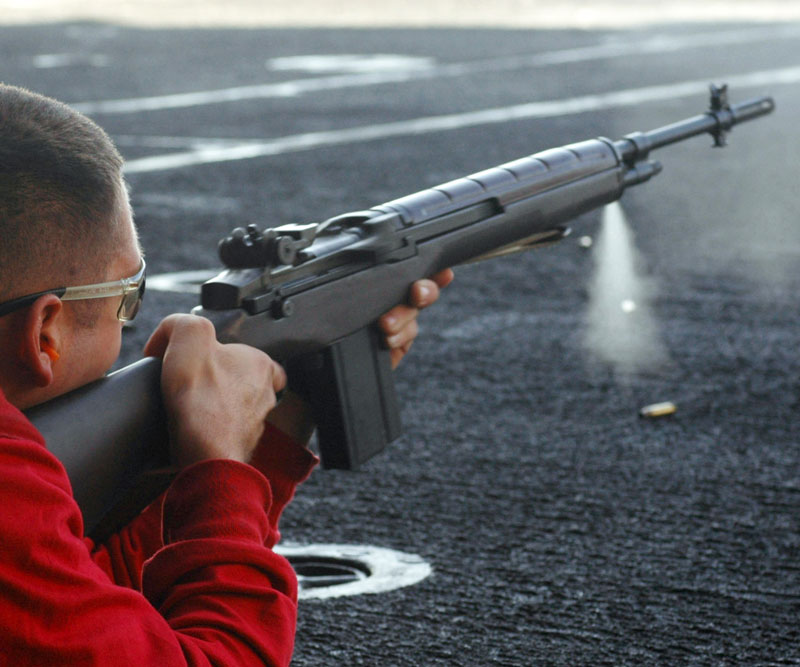 A US Navy sailor fires off a tow line from his Springfield M14 rifle; color
6 / 10 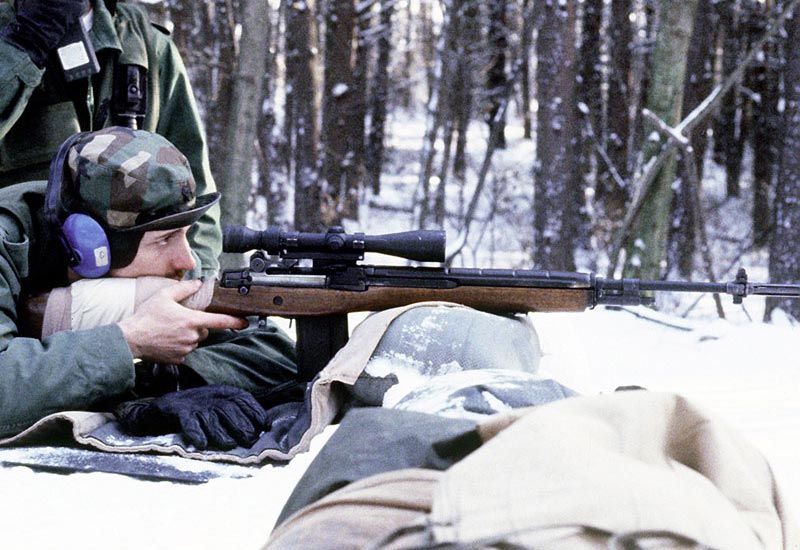 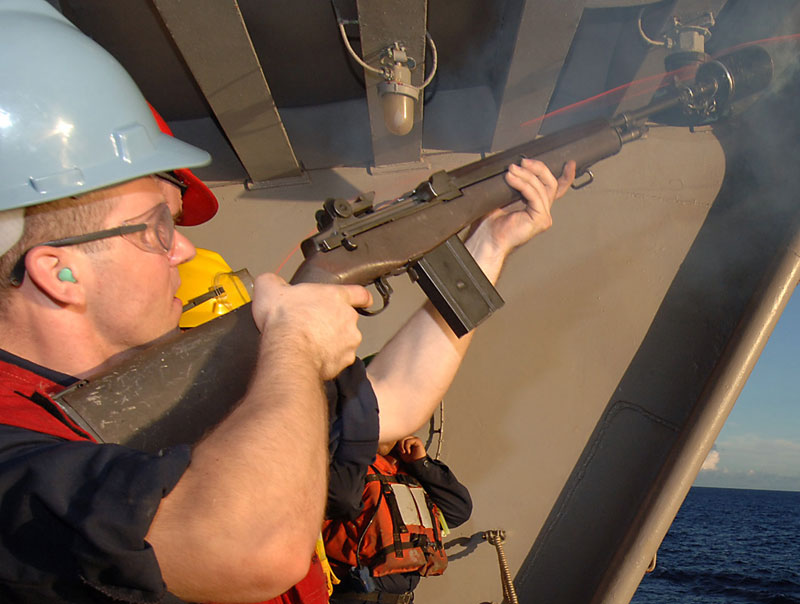 A US Navy sailor fires off a tow line from his Springfield M14 rifle; color
8 / 10 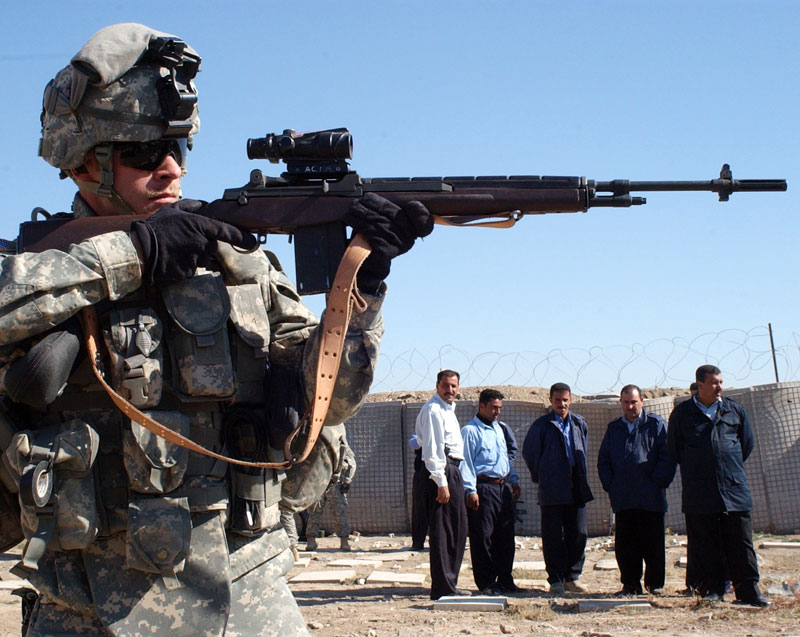 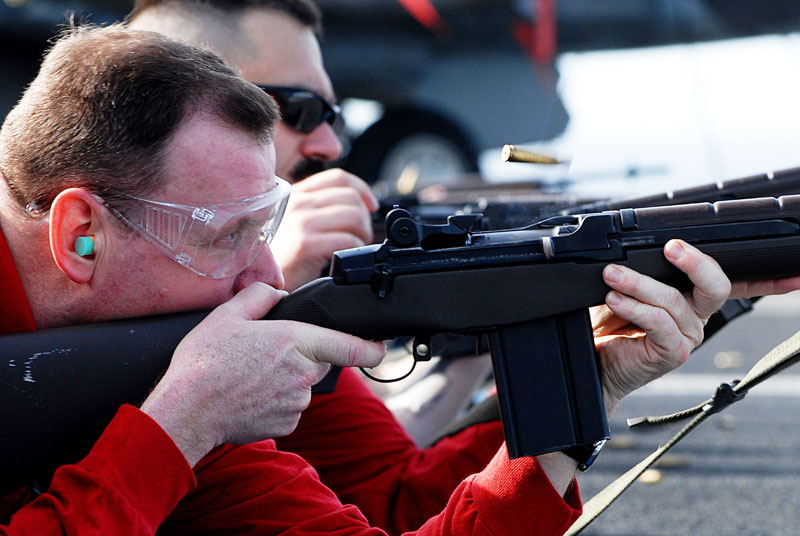 Close-up detail view of the right side of the body on a Springfield M14 rifle at the firing range; color
10 / 10 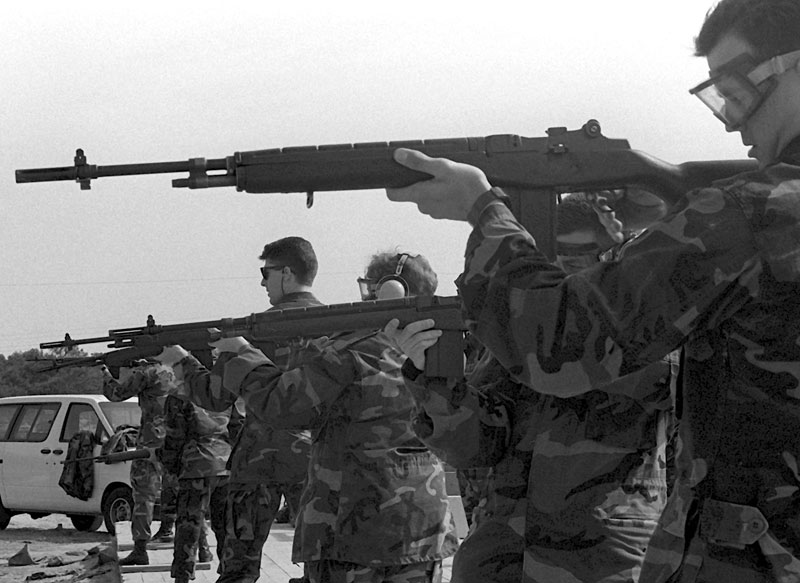 Soldiers fire off their Springfield M14 rifles along the range
❮ ❯