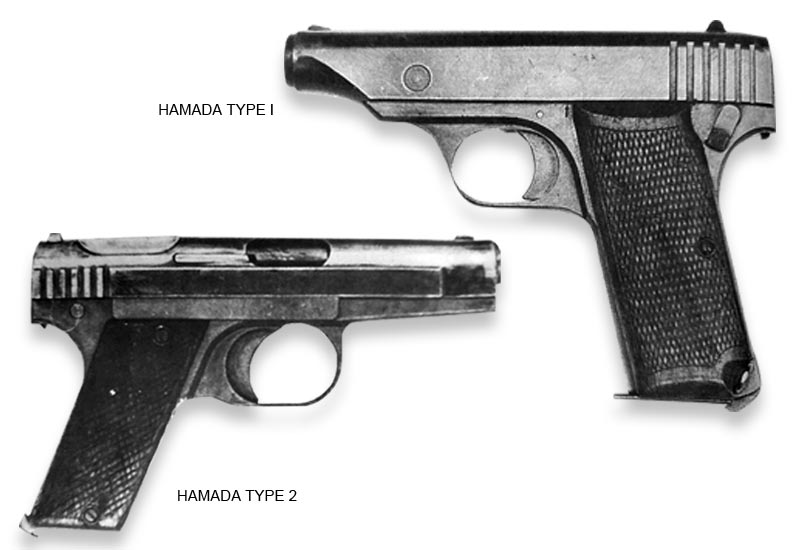 No more than 5,000 units of the Hamada Type semi-automatic pistol were produced for service in World War 2.

The Japan Firearms Manufacturing Company produced fewer than 5,000 units of its Hamada Type pistol, a semi-automatic military sidearm, during the fighting of World War 2 (1939-1945). The gun saw its development started in 1941 when the Japanese Empire was fully-embroiled in Total War with the world and its design was attributed to Bunki Hamada (hence its name). Production of the pistol ended in 1944 with the exact figures lost to history. Prior to the war, Hamada had worked in the sporting guns industry until, in 1941, the Japanese government charged the company with supporting the war effort directly.

The Hamada design freely borrowed from the proven Browning Model 1910 semi-automatic pistol (detailed elsewhere on this site) and was eventually chambered for either the 7.65mm Browning or the local 8x22mm Nambu pistol cartridge depending on the type model series (this also led to a difference in the number of cartridges that could be carried in the spring-loaded magazine). Patents were secured in 1943 for a new striker component as well as a new frame plate lock arrangement while another key engineering difference in the Hamada pistol was its switch to a dovetail joint at the barrel-to-frame connecting point; the original Browning relied on interrupted lugs. A recoil-operated (blowback), locked breech action was used and overall weight reached 650 grams and overall length measured 6.5" with a barrel assembly of 3.5" long. Sighting was through a V-notch and blade iron arrangement over the weapon.

Compact and lightweight, the Hamada Type pistol was expected to directly challenge the troubled Nambu standard issue pistol of the Imperial Japanese military at the time.

Five pilot guns were produced and these were extensively tested in 1941 by Japanese ordnance authorities. Once successful, the pistol was officially adopted into service by the IJA but most would spend their time issued to elements in China with few actually making their way to other parts of the Pacific / Southeast Asian Theater. Unlike other Japanese small arms of the time, particularly those of the late-war period which saw degraded production quality as the war wore on, the Hamada Type pistol managed to keep its relatively high standard of construction in place - which made for a sound weapon system worthy of the Japanese Army officer.

The initial production model was known as the "Pistol, Hamada, Type 1" and this form was chambered in the 7.65mm Browning American pistol round. The follow-up form, the "Pistol, Hamada, Type 2", was produced out of the Nagoya Arsenal and was the Type 1 slightly enlarged and rechambered to use the 8x22mm Nambu pistol cartridge. This was a direct request made by the Imperial Japanese Army (IJA) to help offset shortages of both the Type 14 and Type 94 pistols for its officers. The Army then got its say and had the pistol's exterior almost completely reformed which resulted in the gun having a more rounded shape compared to the Type 1. Internally, the action remain faithful to the original but only about 50 of these pistols were ever made for its intended manufacturing facility suffered under the onslaught of Allied bombs when it was hit in the early part of 1943.


6- or 9-Round Detachable Box Magazine.