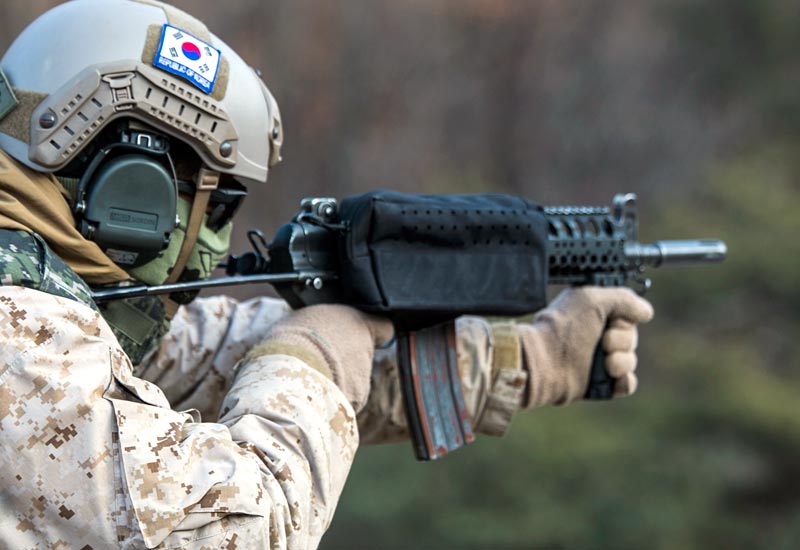 Use of the .223 Remington cartridge make the South Korean ST Motiv K1 unique - it is both a submachine gun and a carbine weapon.

Authored By: Staff Writer | Last Edited: 03/12/2020 | Content ©www.MilitaryFactory.com | The following text is exclusive to this site.
For decades, South Korea had relied on foreign suppliers with which to stock its military inventory. This all changed when indigenous capabilities finally began producing viable solutions to ongoing local requirements. One of the first such products to be put forth by local industry became the "K1", a compact assault weapon that can be categorized as an assault carbine (due to its chambering) or a Submachine Gun (SMG) (due to its relatively compact size). The K1 was adopted to succeed the outgoing line of American World War 2-era M3 "Grease Gun" submachine guns.

Today (2017), the K1 remains the standard submachine gun of the Republic of Korea Army and is chambered for the ubiquitous, and proven, .223 Remington intermediate rifle cartridge despite its SMG categorization (which typically relies on the 9x19mm cartridge). The design stemmed from a 1976 requirement by South Korean special forces requiring an all-modern compact assault weapon for Close-Quarters Battle (CQB). The goal was to find an indigenous economical weapon of relatively light weight, strong construction and increased firepower.

From this the Agency for Defense Development (ADD) went to work and produced a prototype form, the XK1, in 1980. Extensive testing and evaluations then followed before the weapon could be formally certified and introduced for service, this occurring in 1981. Daewoo - later becoming S&T Daewoo - handled initial production though the series now falls under the S&T Motiv brand label. Manufacture of this gun has been ongoing since 1980.

Overall weight is 6.3lb and overall length is 33 inches. A collapsing wire stock allows the length to be reduced to 25.7 inches for a more compact footprint. The barrel assembly measures 10.4 inches long. Internally the weapon relies on a gas-operated system utilizing a rotating bolt with direct-impingement system (as opposed to the more common SMG approach of blowback operation). Rate-of-fire is between 700 and 900 rounds-per-minute (depending on the gas regulator setting) and muzzle velocity is rated at 2,700 feet-per-second. Effective range is out to 250 meters. Feeding is by way of AR-15/M16-style STANAG curved magazines, these holding 30-rounds of ammunition. Standard sights are iron but optics can be set over the receiver in the usual way.

The original production batch guns suffered from failings of the integrated flash suppressor and a heavy recoil which proved the overall construction weak. After some work, an improved model was introduced in 1982 as the K1A and all previous K1 marks were then updated to the newer standard. For civilian purchase, the gun has been marketed as the MAX-1 and is available in Semi-Automatic Fire Only (SAFO). A longer barrel assembly and the changes instituted to the K1A production model has given rise to the K1A1 version for the civilian market.

To date (2017), the forces of Bangladesh, Papua New Guinea, Senegal and South Korea all rely on the K1 SMG. Special forces operatives have also used the type in service.