The Belgian Fabrique Nationale FNC forms the basis for the AK-5 Assault Rifle - the standard-issue weapon of Swedish Army elements.

Authored By: Staff Writer | Last Edited: 02/15/2019 | Content ©www.MilitaryFactory.com | The following text is exclusive to this site. 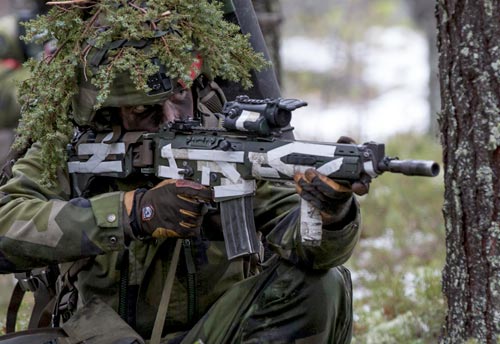 The mid-1970s saw the Swedish Army enter a period of review and modernization amidst a backdrop of the Cold War (1947-1991). This led to an extensive testing phase concerning assault rifles centered on the 5.56x45mm NATO intermediate cartridge. Export guns based on the Israeli GALIL and the Belgian Fabrique Nationale FN FNC (both detailed elsewhere on this site) made it to the final rounds with the FN FNC eventually being selected as the overall winner. Following this, the country acquired a local license to produce the Belgian assault rifle under the local designation of "AK-5".

The AK-5 succeeded the outgoing AK-4 series which was, itself, a locally-produced copy (under license) of the West German Heckler & Koch G3 Battle Rifle in 7.62x51mm NATO. In its prototype form, the AK-5 was marked as "CGA5C2" and, once adopted for service in 1986, became the standard-issue assault rifle of the Army service.

To better serve the local requirement, the Belgian FNC was reworked with a new trigger guard, cocking handle, magazine well, forend pattern, and selector switch. The guard was enlarged to better serve a gloved hand and the forend received deeper cuts for a firmer hold by the supporting hand. The internals were redesigned to better perform in cold weather environments. Bayonet support was not built into the design but could be had by way of an adapter system.

The AK-5 weighed 8.5lb when empty and held an overall length of 39.5", the barrel measuring 17.7" long. It was chambered to fire the 5.56x45mm NATO cartridge through the original FNC gas-operation relying on a rotating bolt mechanism. Feeding was by way of a curved 30-round detachable box magazine inserted ahead of the trigger unit in the usual fashion. Effective range, using the included iron sights, reached out to 1,315 feet. The rear sighting device was of a flip-up aperture type and the front was a simple post. Optical sights could also be fitted for improved ranged fire and the iron sights retained as back up. The shoulder stock was hinged to fold over and away, reducing the overall length of the weapon. Its skeletal, twin-strut design also lightened the weapon's carry weight.

"AK-5A" was used to designate the original standard infantryman rifles. Then arrived the "AK-5B" and this was a Designated Marksman Rifle (DMR) form fitting the L9A1 4x25.5 scope. it also included a cheek-piece at the shoulder stock for operator comfort.

In the mid-2000s, the AK-5B was chosen for modernization and thus the "AK-5C" came into being. This model added Picatinny accessories rails support with sections set over the receiver and under the forend. The weapon could now sport such features as red dot aimers, various scopes, and a vertical foregrip. The shoulder stock was made adjustable and among the additions were an automatic bolt catch, new flash suppressor, ambidextrous controls, and a 13.8" long barrel assembly. The AK-5C superseded the stock of original AK-5A service rifles over a four-year-period of re-equipping by the Army.

The AK-5D was a shortened, carbine-like variant for vehicle crews and Close Quarters Battle (CQB) operators (like special forces). The AK-5D Mk II was similar in form and function but featured the improvements added to the C-models.

The AK-5 has since seen deployment with Swedish forces across peacekeeping actions in Kosovo, Afghanistan, and Chad and further action in conflicts related to Lebanon and Macedonia. It is also in use with special operations elements of the Czech Republic (601st Special Forces Group) and select Swedish and Norwegian police services.
Advertisements 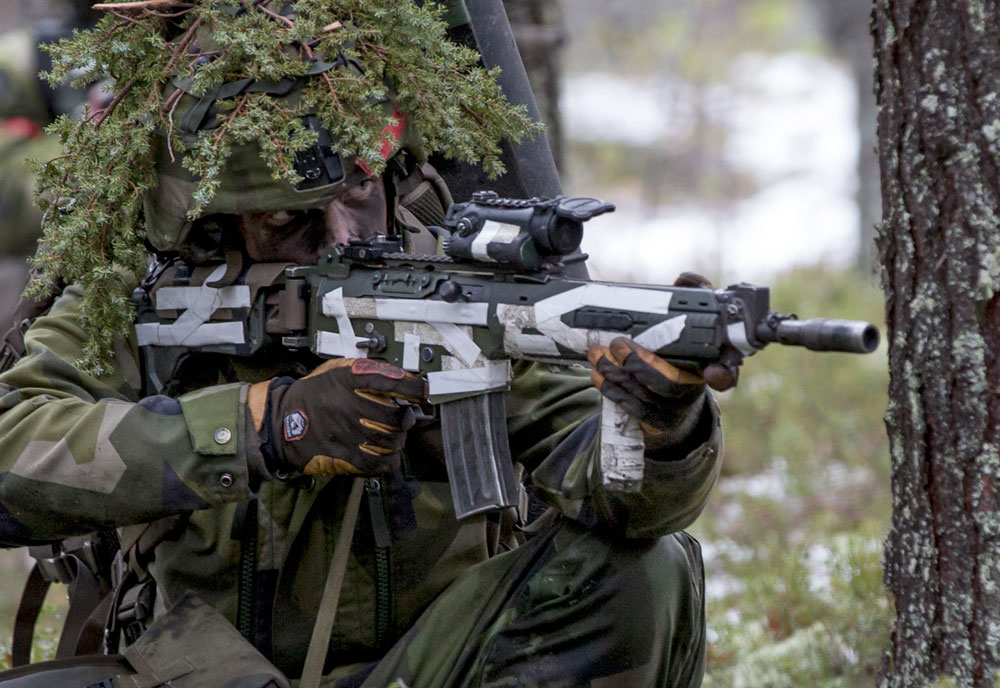