The Improvised Explosive Device has proven the weapon of choice for rebel groups in Iraq and Afghanistan.

Authored By: Staff Writer | Last Edited: 04/28/2021 | Content ©www.MilitaryFactory.com | The following text is exclusive to this site. 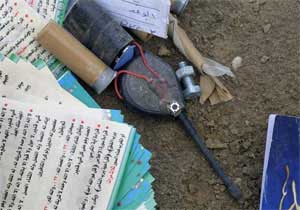 Improvised Explosive Devices ("IED") are in-the-field detonating devices designed to specifically injure, harass or kill individuals or groups of people. IEDs have long since been an accepted part of guerilla-style warfare where conventional warfare exceeds the capabilities of rebel-style groups. IEDs are typically prepared roadside or thrown onto the roads as an enemy vehicle passes. In either case, surprise is the key element and IEDs are, therefore, generally camouflaged t hide their sinister role.

IEDs have been created by all manner of ways including use of household chemicals and elements or military-grade components combined into the proper combustible combination. IEDs can further be of various sizes with the larger versions appropriately causing the most damage/harm. IEDs can be delivered via simple paper bags and steel pipes (as "pipe bombs") to card board boxes and milk crates. Other packages that have been used (particularly in Iraq since 2003) include mortar and howitzer shells - supplying a large blast radius with applicable fragmentation. Such implements can be set off via a timer, timed fuse or cell phone.

IEDs have proven exceedingly popular in ongoing actions across Iraq and Afghanistan by members of Al Qaeda and the Taliban whose access to heavy weaponry is limited and must, therefore, by of the improvised variety (ala the Molotov Cocktail). Coalition forces in the Iraq and Afghan theaters have been attacked by IEDs since the respective invasions to which whole infantry fighting vehicles have been upended in massive explosions. HUMVEEs have proven particularly vulnerable in the early stages of the wars to which up-armored variants were later developed. The extensive use of IEDs by the enemy has led to a surge in mine-resistant vehicles being procured by coalition forces. Mine-resistant vehicles - known as "MRAPs" - are specially designed to withstand certain blast forces from various angles and provide the crew within with a certain level of protection - often at the cost of the entire vehicle itself.
Advertisements

GUERILLA WARFARE Ease-of-use coupled with relative simplicity of combined components makes this entry a cost-effective solution for unconventional elements / fighting forces.
TIMED FUSE Detonation of this entry is reliant on timed fuse; typical quality seen in hand grenades.
PSYCHOLOGICAL Entry has an inherent psychological effect on participants of the battlefield due to potential damage / casualties.

Fuse Detonation
Design relies on timed / fuse detonation. Remote Detonation
Design can be activated through remote means, keeping operators at safe distance from point of detonation. (Material presented above is for historical and entertainment value and should not be construed as usable for hardware restoration, maintenance, or general operation - always consult official manufacturer sources for such information)

*May not represent an exhuastive list; calibers are model-specific dependent, always consult official manufacturer sources.
**Graphics not to actual size; not all cartridges may be represented visually; graphics intended for general reference only.
Rate-of-Fire
1
rds/min

Not applicable. IEDs come in varying shapes and sizes and explosive material is often sized to the required expected blast. 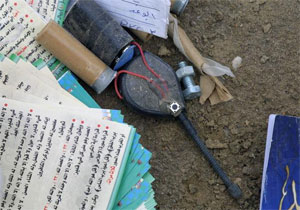