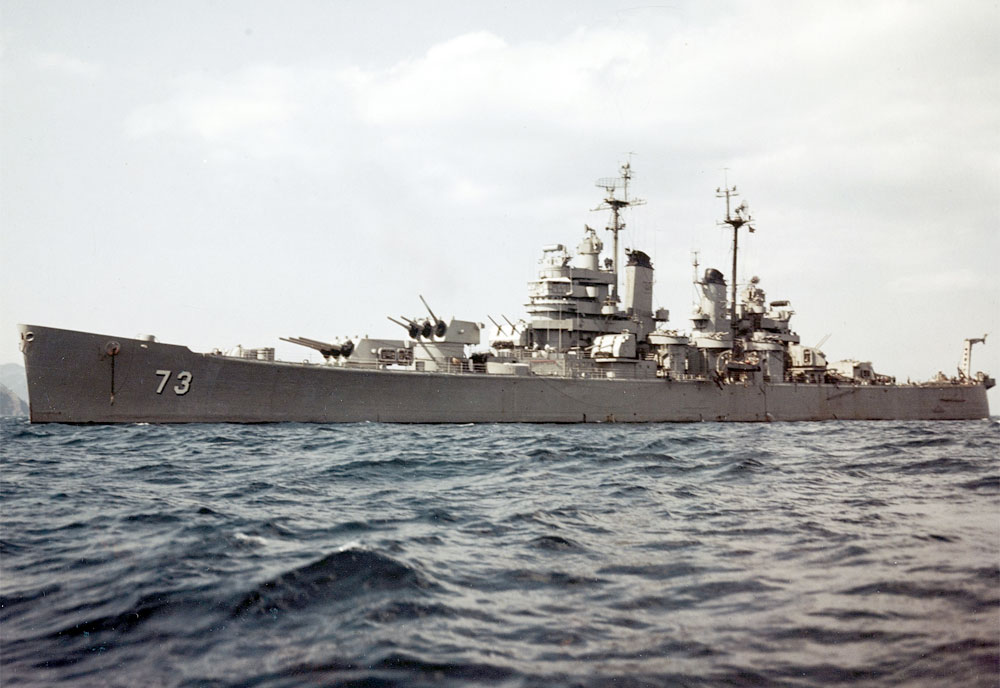 At the height of World War 2 (1939-1945), the United States Navy (USN) contracted with Bethlehem Steel Company of Quincy, Massachusetts to construct USS Saint Paul (CA-73). The warship was part of a greater effort that became the Baltimore-class of ocean-going, heavy-class cruiser warships of which fourteen were earmarked to be built from 1941 until 1945 - the last year of the war. All fourteen were completed and none of the group was lost in action, the class being retired without preservation at any level.

The class succeeded the one-off USS Wichita (CA-45) heavy cruiser and was, itself, succeeded by the Oregon-class. Within the Baltimore-class lay subclasses Boston and Albany.

USS Saint Paul (CA-73) was named after the Minnesota city of Saint Paul and saw her keel laid down on February 3rd, 1943 (originally as USS Rochester). She was formally launched to sea on September 16th, 1944 and entered commissioned service on February 17th, 1945 - just in time for the latter stages of the war.

As built, she displaced 14,500 tons and held a running length of 673.5 feet, a beam of 70.9 feet, and a draught down to 26.4 feet. Power was pulled from an arrangement encompassing 4 x Babcock & Wilcox boiler units feeding 4 x Steam turbinesets generating 120,000 horsepower to drive 4 x Shafts astern. Her conventional powerplant allowed for ocean-going speeds of 32 knots in ideal conditions and aboard was a complement of 1,100 officers and enlisted personnel (approximately 61 and 1,085, respectively). Four recoverable seaplanes were carried on the ship for Over-the-Horizon (OtH) work, these launched from a pair of catapults. Air-search and fighter-direction radars were installed.

Armor protection ranged from 6" at the belt and 2.5" at the deck to 8" at the turret and 6.5" at the conning tower - making for one well-protected warship.

Departing Boston, MA waters in May of 1945, USS Saint Paul's late entry into the war allowed her to see only limited action in the Pacific Theater against the Empire of Japan. This included strikes at Kure, Kobe, and Tokyo before the Japanese surrender of August 1945.

In the post-war years, she remained on station in Japanese waters into November 1945 before relocating to Shanghai into 1946. When war between the Koreas broke out in the summer of 1950, USS Saint Paul returned to action, at first used to cover the retreating Allied forces. During April 1952, a powder fire occurred at her forward main gun turret which cost the lives of thirty men. Repairs on the ship was carried out in Japan before the ship returned to action and her guns used against enemy targets inland. July 1953 saw the warship fire off the last naval rounds of the entire war as a loose armistice was agreed to between the North and South.

In the 1960s, she was pressed into wartime service again with the arrival of the Vietnam War (1955-1975). This marked her last combat exposure. Her decommissioning followed on April 30th, 1971 as the Navy's last all-gun cruiser of the Baltimore-class and she entered reserved status for the time being. Her name was struck from the Naval Register on July 31st, 1978 and her stripped hull was sold for scrapping in January of 1980, bringing about a formal end to a three-war veteran who managed to continuously sail under the flag of the USN for some 26 total years.

(Not all weapon types may be represented in the showcase above)
4 x Recoverable seaplanes.