USS Long Beach CGN-9 was notable in being the first surface combatant of any navy to be powered by nuclear means.

Authored By: Staff Writer | Last Edited: 02/14/2019 | Content ©www.MilitaryFactory.com | The following text is exclusive to this site. 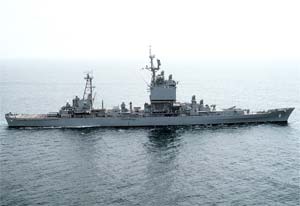 The world's first surface combatant to be powered by nuclear means was USS long Beach (CGN-9). This ship of the United States Navy (USN) was a one-off entry of the Long Beach-class which, on paper, was used to succeed the Providence-class cruisers and was, itself, eventually succeeded by the Albany-class cruiser group. Ordered on October 15th, 1956, Long Beach was laid down on December 2nd, 1957 and launched on July 14th, 1959. The USN took ownership on September 1st, 1961 and fully-commissioned the warship into service on September 9th of that year - by which time she was the largest non-aircraft carrier surface combatant anywhere in the world.

For her time at sea, USS Long Beach sailed under the motto of "Strike Hard, Strike Home". While being the first USN nuclear-powered surface ship, she also marked the last USN ship built to cruiser design standards as the service moved to abandon cruisers in general - this also made her the only cruiser design adopted by the USN in the post-World War 2 world.

At the time of her ordering, the warship carried the designator of "CLGN-160" but, in early 1957, this was converted to "CGN-16". In July of that year, her designator was once again changed to "CGN-9" which stuck for the rest of her ocean-going career. In her original guise, Long Beach was also drawn up as a more contained frigate until redesigns, and her growing role, forced her dimensions and displacement to be broadened to those of a heavy-class cruiser type.

As operated, the warship had a displacement of 15,540 tons and an overall length of 721.2 feet with a beam of 71.5 feet and a draught of 30.6 feet. Power was from 2 x C1W nuclear reactor units tied to 2 x General Electric turbines producing 80,000 horsepower used to drive two shafts astern giving the vessel a maximum speed (in ideal conditions) of 30 knots. With her nuclear propulsion scheme, the vessel had essentially inherently unlimited operational range. Her nuclear units were built along the same lines as those used to power the mighty USS Enterprise aircraft carrier (detailed elsewhere on this site) and would require the usual maintenance and refueling at scheduled intervals - with all the inherent dangers of dealing with nuclear energy and waste to boot.

Throughout her service life, however, Long Beach was naturally modernized in several ways, chief among these was her armament suite: The Terrier missile launchers were succeeded by Standard ER missile launchers and BGM-109 "Tomahawk" land-attack cruise missile support (2 x 4-cell launchers) was added that replaced the rear Talos missile launcher while a pair of 4-cell RGM-84 "Harpoon" anti-ship missile launchers was added for an offensive "punch" against surface ships at-range. A pair of 20mm Phalanx Close-In Weapon Systems (CIWSs) were added for point defense.

Her design profile was rather unit in the large, oversized and boxy superstructure dominating her midships. Her forecastle was stepped in the usual way and, towards the stern, a single-helicopter landing pad was seated but it was this structure that housed many of the major systems and sub-systems that gave the mighty ship her power. When the final mast works were added to the superstructure, the warship toward over most others - completing a rather imposing and somewhat cumbersome sight.

USS Long Beach revved up her nuclear units to conduct her first sail on July 6th, 1961 and her first refit/refueling was handled as soon as 1965-1966 after which point the warship had already covered some 167,000 miles of at-seat traveling. During 1967, 1968, she was stationed in Southeast Asia during the American commitment to the Vietnam War (1955-1975) where her advanced technology could be put to great use. With her missiles, she claimed at least two enemy MiG fighter aircraft kills during 1968 while, on the whole, she and her crews responded to no fewer than seven engagements while also directing "friendlies" in attacks of their own. Of particular note was the warship could claim aerial targets flying over enemy-held territory with her missiles as far as 75 miles away.

By 1979, USS Long Beach was beginning to show its age and its weapon suite was upgraded to better contend with emerging threats of the Cold War period (1947-1991). Several of her notable radar fixtures were either stripped altogether or replaced with more advanced forms and sonar was improved as was ranged and close-in defense with work had into 1981. From 1984 until 1985, she experienced her next major overhaul which, among other issues, addressed armor protection. In 1985, the aforementioned Tomahawk cruise missile support was added to give the USN vessel a considerable ranged land-attack capability and, the following year, she sailed with a USN battlegroup across the Western Pacific that included the famous battleship USS New Jersey. In 1991, she operated alongside New Jersey's sister, the battleship USS Missouri, during the American commitment to the Persian Gulf War. Her final task was in support of U.S. personnel evacuating the eruption of Mount Pinatubo in the Philippines.

Due to the cost of operating a nuclear-powered warship, and the extensive military draw-down that followed the end of the Cold War (1991), any further plans to modernize USS Long Beach were delayed until cancelled in full. She was deactivated on July 2nd, 1994 (at Norfolk) and formally decommissioned on May 1st, 1995. Stripped of her nuclear equipment and all other military-grade usefulness, the stripped hulk of this once-proud ship was finally sold off in 2012.
Advertisements

(Not all weapon types may be represented in the showcase above)
1 x Navy helicopter on stern helipad. 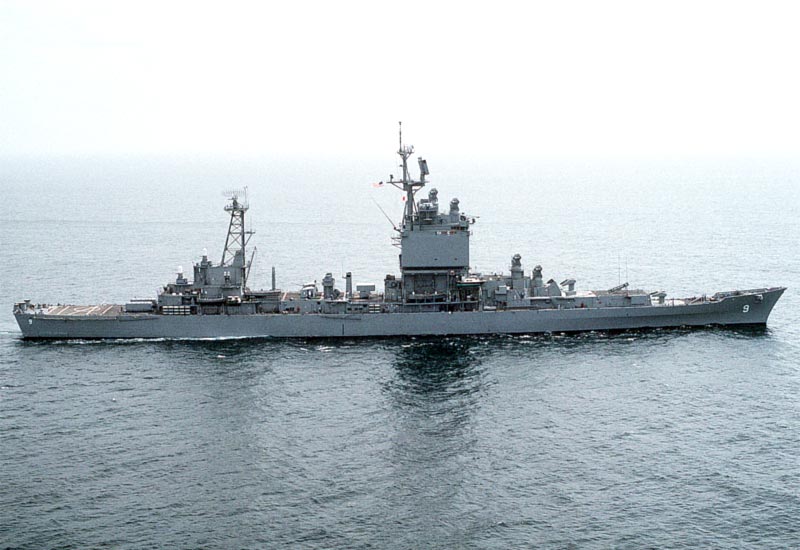