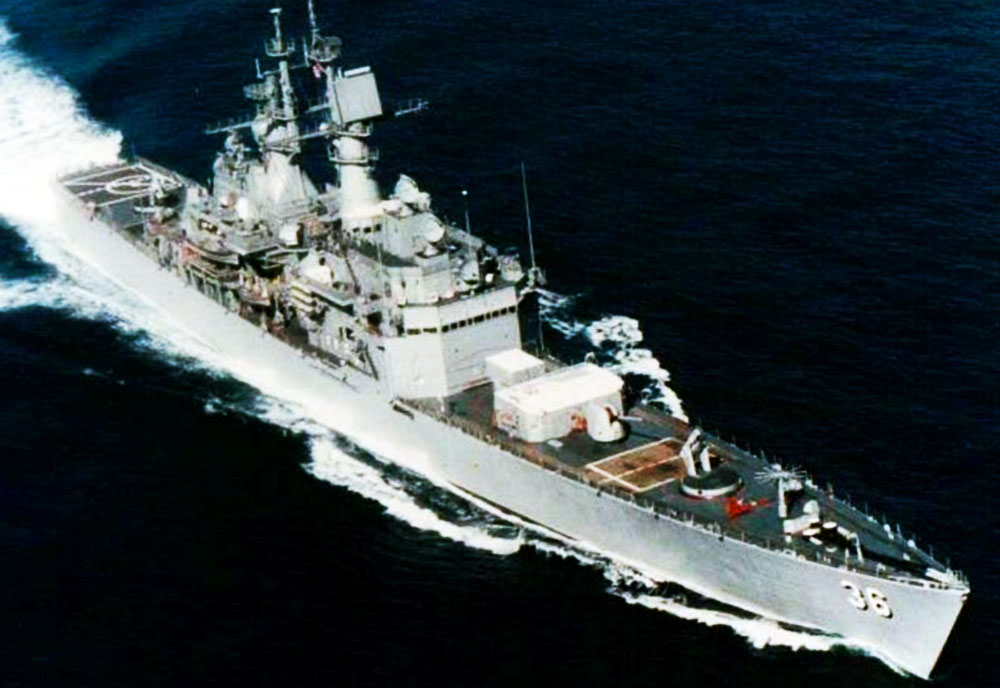 USS California CGN-36 - the nuclear-powered Golden Grizzly - led a service life from 1974 until decommissioning in 1999.

Authored By: Staff Writer | Last Edited: 05/24/2019 | Content ©www.MilitaryFactory.com | The following text is exclusive to this site.
For a time during the Cold War (1947-1991), the United States Navy (USN) invested in nuclear-powered surface combat ships like the California-class. This class, numbering two, were conceived of during the 1960s and entered service in the middle part of the 1970s offering unprecedented range and a multi-mission mindset. Eventually, the focus returned to conventionally-powered surface ships, leaving just the mighty carrier fleet of the USN to operate solely by nuclear means.

The California-class was led by USS California (CGN-36). She saw her keel laid down on January 23rd, 1970 by Newport News Shipbuilding (Newport News, Virginia) and the warship was launched on September 22nd, 1971. The USN formally took ownership of the vessel on February 7th, 1974 and official commissioning followed on February 16th of that year. The ship sailed in largely a deterrent role throughout the rest of the 1970s, 1980s, and 1990s before being given up for good. She was decommissioned on July 9th, 1999, scrapped, and had her nuclear powerplant recycled.

During her time at-sea, she was known by the nickname of "Golden Bear". Her sister was USS South Carolina (CGN-37), operating from January of 1975 until July of 1999.

As built, California was given a displacement of 10,815 tons under light loads and 11,735 tons under full loads. Her running length equaled 596 feet with a beam measuring 61 feet and a draught down to 33 feet. Power was through 2 x General Electric D2G nuclear reactors driving 2 x Shafts under stern and providing the warship with an ocean-going maximum speed of 30 knots under ideal conditions. Due to her nuclear powerplant, her range was essentially unlimited.

Aboard was an assigned crew of 584 personnel including 40 officers.

Her profile involved a largely unobstructed forecastle leading up to the slab-sided bridge superstructure. Twin masts were fitted towards midships and the superstructure was of a stepped design. At the aft-end of the vessel was the single-helicopter deck. The warship could launch and retrieve a single medium-lift helicopter, this unit outfitted for tasks to include cargo resupply, Search and Rescue (SAR), Anti-Submarine Warfare (ASW), anti-ship sorties, and the like. Typical models supported were the Kaman SH-2 "Seasprite", Sikorsky SH-3 "Sea King", and the Boeing-Vertol CH-46 "Sea Knight" tandem-rotor type. While the warship could carry a single helicopter, it lacked the full-service capabilities of an onboard hangar - limited the tactical usefulness of said helicopter.

USS California was originally drawn up under the "Destroyer Leader" (DLGN) classification but this was later changed to "Guided-Missile Cruiser" (CGN) in June of 1975. In 1980, she operated as a support unit during the Iran Hostage crisis and, later that April, was part of the failed rescue operation known as "Eagle Claw". She then made a round-the-world journey in 1981, the first by a nuclear vessel since 1964.

From there, the warship was part of various patrols, exercises, and journeys. In April of 1990, she made her way to Puget Sound Naval Shipyard of Bremerton, Washington to undergo a three-year overhaul of her facilities. The work lasted until January of 1993 and resulted in the installation of the potent New Threat Upgrade Combat Systems Suite (NTUCSS). More joint exercises then followed and the vessel was upgraded again in 1995.

With rising costs and a heavy commitment required to operating and maintaining a nuclear propulsion scheme, the days of the nuclear-powered cruiser in USN service were numbered. USS California, therefore, sailed on into 1998 and then faced deactivation. Her name was struck from the Naval Register on July 9th, 1999 and she was scrapped by mid-2000.

(Not all weapon types may be represented in the showcase above)
1 x Medium-lift naval helicopter on stern flight deck (no hangar support facilities) for permanent storage.