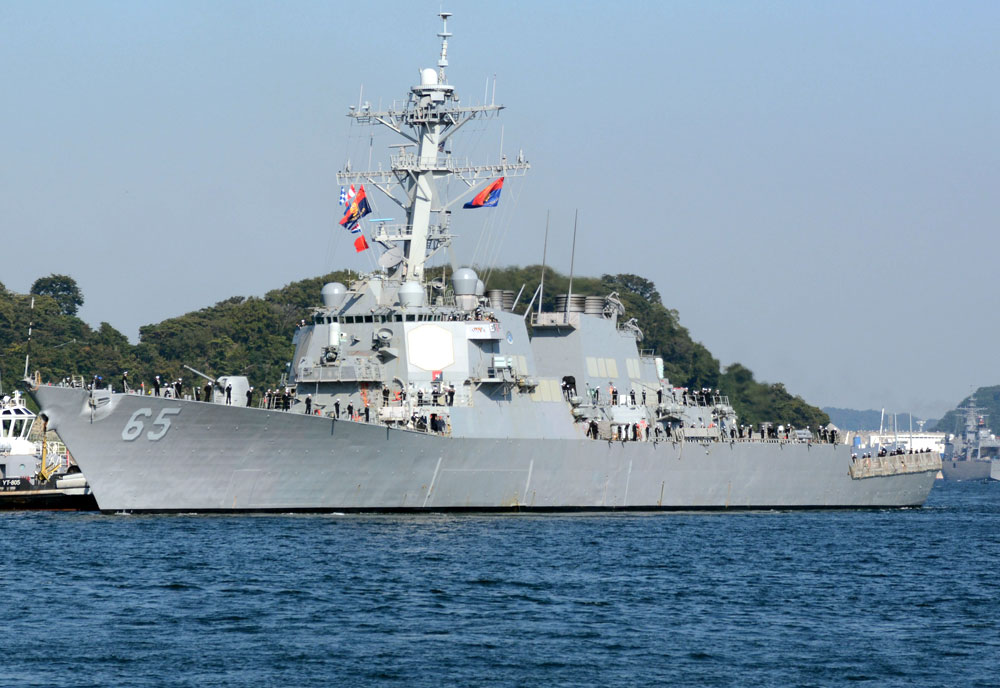 USS Benfold DDG-65 is an active component of the United States Navy Pacific Fleet and based in Yokosuka, Japan.

The Arleigh Burke-class is an American product of the late-Cold War period, emerging in the late 1980s from a massive construction effort to advance United States Navy (USN) capabilities in Blue Water operations (the Soviet Union remained the primary enemy of the West). Sixty-eight total warships were built to the standard (with construction still ongoing) and these were used to succeed an aging line of Kidd-class and Charles F. Adams-class warships. As destroyers, the Arleigh Burke-class is charged with multi-mission operations operating independently or as part of the main surface fleet. The modern vessels are fully-equipped with ballistic, missile, and electronic weaponry as well as the advanced AEGIS combat system - making them key components in any USN surface response.

The group was built from 1988 onward and has been in commissioned service since 1991. A total of 89 warships are still planned for the series with three on order and seven under construction as of September 2021.

Among their number is USS Benfold (DDG-65), a guided-missile destroyer given a balanced focus on anti-aircraft, anti-ship, and anti-submarine warfare. She was ordered by the United States Navy on January 16th, 1991 and saw her keel laid down by Ingalls Shipbuilding (Mississippi) on September 27th, 1993. She was launched on November 9th, 1994 and formally commissioned into service on March 30th, 1996. Today (2021), she homeports at Yokosuka, Japan and serves as an active deterrence against Chinese aggression.

Her namesake is Edward Clyde Benfold, a 21-year-old USN hospital corpsman (3rd Class) killed-in-action during the Battle of Bunker Hill during the Korean War (1950-1953).

As completed, the warship displaces 6,900 tons under light load and 9,000 tons under full load. Her dimensions include a length of 505 feet with a beam of 59 feet and a draught of 31 feet. Power is from 3 x Rolls-Royce AG9130F (Allison 501-K34) turbines driving 2 x Shafts astern, allowing the vessel to reach speeds in excess of 30 knots out to a range of 4,400 nautical miles.

Aboard is a complement of around 280 and includes officers and enlisted personnel as well as an air wing. The warship is outfitted with 3D radar, surface-search radar, fire-control radar, a hull-mounted sonar array, and towed sonar array. The AN/SQQ-28 LAMPS III is the shipboard system serving the air wing while the AN/SLQ-32(V)2 fulfills the Electronic Warfare (EW) role. The AN/SLQ-25 "Nixie" is the torpedo countermeasures solution.
Advertisements

The warship's design lines are consistent with the Arleigh Burke-class featuring the single turreted deck gun over the forecastle, the bridge and main mast works integrated to the forward superstructure, low-profile (enclosed) smoke funnels amidships, and a single-helicopter landing area over the stern. The helipad supports medium-lift types operated by the USN and can cover roles from at-sea resupply and Search and Rescue to Anti-Submarine Warfare (ASW) and Over-the-Horizon (OtH) sorties.

Since launched in 1994, the warship has undergone modernization on two occasions - once in 2011 and once in 2013. The 2011 modernization was handled by Bae Systems San Diego and encompassed upgrades and improvements including broader bridge integration and enhanced damage control. The modernization of 2013 upgraded combat responsiveness and capability with the addition of the AEGIS Baseline 9C system. Sonar was also upgraded as was ballistic defense.

Over the course of her ocean-going career, Benfold has been in active deployment since 1997, finding herself on station throughout the Persian Gulf and Pacific. More recently, she had been used as part of America's "show-of-force" against China in the disputed waters of the South China Sea in support of allies Japan, South Korea, and Taiwan.

ANTI-AIRCRAFT Onboard systems alert and protect the vessel from airborne, low-flying airborne threats through ballistic and / or missile weaponry.
OVER-THE-HORIZON An Over-the-Horizon operational capability is granted to the vessel, typically through launched fixed-wing / rotary-wing aircraft.
SHIP-TO-SHORE Onboard facilities provide for the launching of air and/or land elements for shore attack and infiltration.
MISSILE ARMAMENT The vessel supports the launching of missiles against airborne, waterborne, or land-based targets at range; typical of modern designs.
TORPEDOES Ability to launch torpedoes against ocean-going targets.
ANTI-SUBMARINE ROCKETS Ability to launch salvo of rockets against submarine threats.

(Not all weapon types may be represented in the showcase above)
1 x Medium-lift navy helicopter launched / retrieved from the stern helipad.