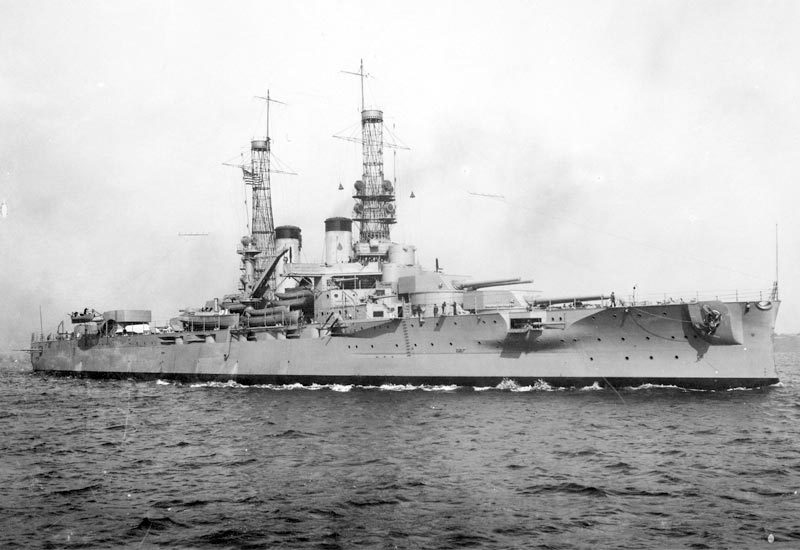 Authored By: Staff Writer | Last Edited: 03/20/2018 | Content ©www.MilitaryFactory.com; the following text is exclusive to this site.
With the arrival of the game-changing HMS Dreadnought battleship in British Royal Navy service during 1906, the naval powers of the world worked feverishly to catch up by updating existing designs or beginning construction of all new warship designs. The United States Navy (USN) followed the world trend and gave rise to several classes during the pre-World War 1 (1914-1918) period such as the Wyoming-class. This group numbered two warships, USS Wyoming (BB-32) and USS Arkansas (BB-33), and both went on to have storied careers in USN service.

USS Arkansas, the focus of this article, was laid down by New York Shipbuilding Corporation on January 25th, 1910 and launched to sea on January 14th, 1911. She was formally commissioned on September 17th, 1912 and would managed a career until 1946.

HMS Dreadnought was revolution because it became the first "all-big-gun" warship design to appear and its other key quality was its all-steam-based powerplant. The result was an excellent combination of power, firepower, armor, and performance.

As built, USS Arkansas displaced 26,417 tons under standard load and 27,680 tons under full load. Dimensions included an overall length of 562 feet, a beam of 93.2 feet, and a draught of 29.6 feet. Machinery was made up of 12 x Babcock & Wilcox coal-fired, water-tubed boilers feeding 4 x Parsons direct-drive steam turbines generating 28,000 horsepower to 4 x Shafts under stern. Performance showcased a speed up to 20.5 knots and a range out to 8,000 nautical miles. Aboard was a crew numbering 1,063 personnel. Her profile included six total main turrets, a centralized hull superstructure and two main masts, one fore and the other aft of a pair of centrally-located smoke funnels.

The armament suite was headed by 12 x 12" (305mm) /50 caliber Mark VII main guns arranged in six twin-gunned turrets, two forward of the hull superstructure and four aft of it. This was supported by 21 x 5" (127mm) /51 caliber secondary guns. 4 x 3-pounder (47mm) /40 caliber guns were used in the saluting / ceremonial role and the warship was outfitted with 2 x 21" (533mm) torpedo tubes in submerged positions along her beam.

Commissioned in 1912, USS Arkansas was already in service by the time World War 1 (1914-1918) broke out in Europe during the summer of 1914. The United States remained on the sidelines until 1917 and warships like USS Arkansas were quickly placed into active wartime service, initially patrolling the critical lanes of the American East Coast. Despite she being attached to the Battleship Division 9 of the British Grand Fleet for 1918, she failed to see any direct combat against the enemy. The Austro-Hungarian, Ottoman and German empires were all but finished with the Armistice of November 1918.
Despite this showing, USS Arkansas remained a primary component of USN fleet service going forward. She served as a training platform and complete the requisite "goodwill" port visits to American allys the world over during the Inter-war Period (1919 - 1939). In 1925 she was given a major overhaul at the Philadelphia Navy Yard. Part of the work involved structural changes to increase her beam (width) which added anti-torpedo bulges for added protection and armor protection as a whole was addressed to coincide with new foreign threats. Oil-fired boilers, four total units, now replaced her original coal-fired types numbering twelve units. At least five of her 5" gun turrets were stripped away in favor of rapid-firing 3" (76mm) /50 caliber types as an anti-aircraft measure. All this work added to her displacement which climbed closer to 30,000 tons. One major visible change to her profile was the reworking of the aft structure to provide operating clearances for an aircraft catapult over Turret No. 3 (three floatplanes could be carried, launched, and retrieved now). The torpedo armament was removed. The refit lasted into 1927.

With the outbreak of World War 2 in September of 1939, the United States, again, stood on the sidelines as Europe managed to get itself into another global conflict. With every passing month, the United States was brought closer and closer to war until the Japanese Attack on Pearl Harbor on December 7th, 1941 all but secured American participation in the conflict.

USS Arkansas undertook convoy escort duties in the early part of the war and was pulled into the North Africa Campaign thereafter, supporting the Allied invasion through Operation Torch. She then took part in the Allied invasion of North France during D-Day on June 6th, 1944 as a massive contingent of man and machine went ashore against dug in Axis forces. Operation Dragoon then followed which marked the Allied invasion of Southern France to which USS Arkansas was once again called upon to support. This also became a notable Allied victory in the march to Paris. Her career in World War 2 was beginning to wrap up with the participation in the amphibious assault on the Japanese-held island of Iwo Jima in the Pacific Theater - the warship now having found in all three theaters of the conflict (and survived!). Thereafter, her guns were used against enemy positions on Okinawa. With the Japanese surrender in August of 1945, World War 2 had officially come to a close.

As with other ships in USN service, USS Arkansas was used in Operation Magic Carpet which saw the return of tens of thousands of American troops back stateside. In 1946, stripped of her war-making usefulness, she began to take part in tests related to the American atomic bomb program at Bikini Atoll (Operation Crossroads). On July 25th, she was expended by an underwater nuclear explosion at the atoll. On July 29th, she was formally decommissioned from active service in the USN fleet and her name struck from the Naval Register on August 15th of the year.

Over her service career, USS Arkansas and her crews earned four Battle Stars, survived two World War, and helped to further the American atomic program - quite an accomplishment for a warship preceding The Great War.

(Not all weapon types may be represented in the showcase above)
1927 Refit:
3 x Reconnaissance Floatplane Aircraft (1 x launching catapult).